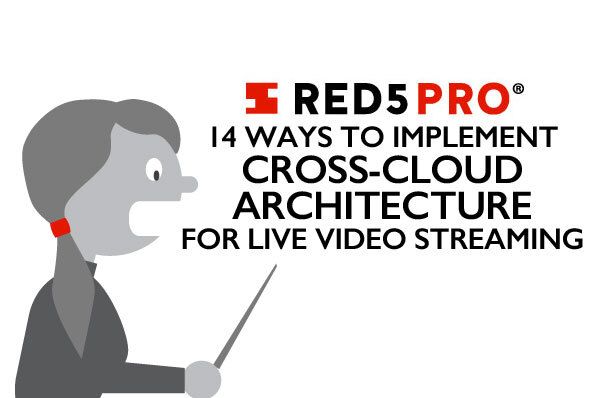 A Strategy for Minimizing Live Streaming Costs with Red5 Pro

Anyone planning to use public cloud services to support live streaming at massive scales on the Red5 Pro platform has reason to expect the optimum solution will be one that’s least expensive.

How can this be?

Simple. As we all learned from economics 101, once we’ve found the solution we’re looking for, what we pay depends on our freedom to shop.

Ever more OTT video service providers are discovering the best way to stream live content to vast audiences at sub-second latencies is to create their own CDN infrastructures using Red5 Pro’s streaming platform. But what might not be so well understood is that if you’re relying on providers of public cloud resources for some or all of the infrastructure you need to instantiate Red5 Pro, you can mix and match whatever combination of those resources works best for you to reach all locations with fail-safe redundancy.

In other words, you have freedom to shop.

Of course, you can choose to implement Red5 Pro with a single supplier of cloud compute resources. If market-leading brand recognition is an important criterion, Red5 Pro has made it easy to work with AWS, Microsoft Azure or Google Cloud Platform utilizing Custom Cloud Controllers developed to translate the commands generated by Red5 Pro’s Stream Manager for interactions with their API calls.

But Stream Manager, the software set that orchestrates operations across all Red5 Pro CDN node clusters, can just as easily be used to manage those clusters in a cross-cloud configuration that may or may not involve any of the big three. Such possibilities make all the sense in the world considering that the normalization of public cloud computing as a routine aspect of doing business in today’s economy has triggered an outpouring of cloud computing providers worldwide.

Here 11 providers are highlighted in addition to the big three as examples of the many infrastructure-as-a-service (IaaS) offerings that can be used with Red5 Pro. Some of these cloud services operate at global, others at regional scales using either container- or hypervisor-based versions of virtualization technology or, more often, both.

Red5 Pro is enabling its customers to take advantage of this cornucopia of options through a single Cloud Controller that interacts with HashiCorp’s Terraform open-source multi-cloud toolset. Terraform translates IaaS resources into a high-level configuration syntax that allows APIs to be abstracted for access through a Terraform Cloud API specific to each provider.

Red5 Pro customers’ flexibility to use whichever Terraform provider platforms they choose is facilitated by mechanisms that mitigate any disparities in approaches to virtualization between a Red5 Pro customer and an IaaS supplier.

In the case of customers accustomed to working with virtual machines running on hypervisors who want to leverage a Docker container-based IaaS provider that utilizes Kubernetes to orchestrate containers, the Red5 Pro Terraform Cloud Controller directly interfaces with the Terraform Kubernetes Provider, which performs the abstractions necessary for conformance with the containerized environment. Likewise, there’s an OpenStack Provider that allows a container-oriented video service provider to work directly with an OpenStack-based IaaS provider.

This sampling of 11 IaaS providers that can be employed to support instantiation of a Red5 Pro-based live streaming CDNs illustrates the flexibility video service providers now have to avoid overspending while creating the most robust means of reaching targeted audiences with backup redundancy wherever they are at ultra-low latency. This is possible because Stream Managers orchestrating individual clusters and sharing the same database are all aware of the state of the whole network.

With holistic management of all resources in the Consolidated Cloud Distribution System (CCDS), Stream Managers are able to perform load balancing and instant reconfiguration of nodes in the event of failures. Using Red5 Pro’s Autoscaling Feature, they are able to control dynamic utilization of CCDS resources, spinning instances up or down whenever and wherever conditions change.

The IaaS providers profiled here have made it simple to quickly discern their potential usefulness in any given implementation of a Red5 Pro CDN. Most of their websites provide access to comprehensive pricing information, the technical details of their platforms, locations of facilities and much else. They all offer aggressive usage-based pricing with flexibility to scale resources as needed.

Taking them alphabetically, here are snapshots of each:

In operation since 2009, China’s answer to AWS has built a cloud compute business recently ranked as the fifth largest in the world accounting for about 4% of the $206.2 billion in estimated revenue generated by the cloud service sector in 2019. Alibaba’s global cloud infrastructure offers IaaS support in 21 regions of 12 countries, including 9 regions in China. The company says it is investing $28 billion over the next three years to expand and upgrade the infrastructure. It is strongly focused on global elasticity with a China-centric perspective, enabling customers to extend the reach of their applications seamlessly across the regional footprints in China and elsewhere utilizing its Elastic Container Instance, various iterations of hypervisor-based virtualization.

This New York-based cloud provider is oriented toward working hands on with developers and newcomers to the cloud computing space with a network of 13 datacenters largely concentrated in North America and Europe with one Asian location in Singapore. The company, a close partner of Red5 Pro that serves over a million developers in 195 countries, can spin up thousands of instances in less than a minute on its Kubernetes infrastructure with SLAs guaranteeing 99.99% uptime.  Its low-cost business model includes support for a 1-cent per-gigabyte transfer rate and 4-TB credit per 2vCPUs “droplet,” the company’s term for the virtual machines it offers with different levels of dedicated CPU and memory.

This China-based IaaS provider is an AI specialist touting what it says is “one of the largest Docker clusters in the world” covering nine zones in major population centers of the country. Challenging Alibaba and Tencent (see below) for supremacy in China, JD Cloud claims its containerized infrastructure is designed for optimal flexibility with a high density of GPU clusters contributing support for high-speed applications, one of four categories of server/memory configuration in its datacenters.

An early innovator in the cloud compute space, Philadelphia-based Linode was founded as a low-cost IaaS provider by Linux innovators who created an alternative to OpenStack for the hypervisor virtualization architecture. The company has a global footprint serving 196 countries from 11 datacenters, including four in North America. It recently switched from the Xen hypervisor to KVM and is rolling out Kubernetes clusters in all its datacenters. It is also introducing GPU clusters and recently addressed security concerns by building out what it says is an advanced DDoS mitigation system across its global network.

South Korea-based Naver has built a 10-datacenter global footprint offering multiple container-based architectures to facilitate specific needs, from high-performance computing utilizing dedicated clusters to dynamic resource configurations targeted to applications like video, gaming, e-commerce and finance. The infrastructure is designed to support orchestration of applications across all datacenters utilizing dedicated global and local high-speed links. The company offers a managed Kubernetes service to aid customers with configuration of microservices on its platform. It also uses VMWare as a hypervisor running on bare metal to enable users to create logically isolated virtual network spaces to support applications running on virtual machines.

Deutsche Telekom has created this OpenStack-based IaaS platform to support public utilization of its three large datacenters in Germany and two operated in Amsterdam through an affiliation with datacenter operator NLDC. Its pricing models are highly specific to applications and can be assessed for price comparison through an online price calculator. OTC provides support for Docker/Kubernetes virtualization with commitments from customers to the configuration of Docker-specific clusters using its Cloud Container Engine.

Oracle has equipped 18 datacenters on six continents to support a highly secured IaaS platform and is in the process of adding several more to the service, including its home base datacenter in Silicon Valley. With a commitment to challenging AWS, the company has adopted an aggressive pricing strategy that’s meant to put the most advanced cloud technologies in affordable reach of any business, starting with a free tier to encourage people to test drive the platform. Oracle supports hypervisor and container iterations of virtualization, including side-by-side configurations, with an SLA that covers performance and manageability in addition to uptime requirements.

This New York City-based IaaS provider puts heavy emphasis on working closely with customers to get the most out of bare-metal resources for their applications. It operates seven datacenters, four in the U.S. and one each in Amsterdam, Singapore and Tokyo, plus dedicated edge resources in multiple locations throughout North America, Europe and APAC. The fully automated infrastructure is based on a pure Layer 3 network topology with routed interfaces to every server. Server resources are allocated to customers on a dedicated rather than shared basis.

This Chinese cloud service provider’s global footprint encompasses seven regional datacenters in China and Hong Kong and 18 others arrayed across the U.S., Canada, Singapore, South Korea, India, Europe and Russia. These resources are allocated on a dedicated basis across 53 “availability zones” with support from direct and peering connection services to link them for specific applications. The company supports a wide range of virtualization modalities including several hypervisors and container iterations based on Docker and LXC. Everything, including the Tencent Kubernetes Engine, resides in dedicated Tencent Cloud Virtual Machine instances running on its logically isolated CVM private network, which brings a uniform level of robust security, multi-OS Linux and Microsoft management, elasticity and scalability to all environments. Tencent also supports GPU cloud computing in all regions

This Canadian cloud service provider, operating from two large datacenters in Montreal and San Jose, positions itself as an ideal regionally focused choice for a cross-cloud architecture. The company is a strong advocate of OpenStack-based virtualization, which it believes is a better foundation for Kubernetes-based container operations than a bare-metal environment. It has implemented OpenStack’s Magnum API to enable containerized instantiations on its servers.

The New Jersey-based company operates 17 datacenters, including nine in the U.S., four in Europe and one per country in China, Japan, Singapore and Australia. Originally built as a KVM-based platform, Vultr’s cloud compute system has been enhanced to support Kubernetes-managed containers as well. The company’s Cloud Controller Manager, along with supporting its in-house developed Kubernetes cluster-provisioning tool, enables customers to upload and work with virtually any ISO-certified OS. And it makes it possible for them to spin up and scale a low-latency multi-regional infrastructure from any location.

These are but a few examples of IaaS providers Red5 Pro customers can work with as they build cross-cloud architectures suited to their needs. Thanks to Red5 Pro’s tie-in to the Terraform supplier ecosystem and the multi-cloud management capabilities of Stream Manager, providers of live streamed video have the freedom to shop for the best cost-benefit equation knowing they’ll be able to reach all targeted viewers worldwide at industry-leading ultra-low latencies no matter what they choose.

Interested in reducing your streaming costs? See what Red5 Pro can do for you. Send an email to info@red5pro.com or schedule a call directly.