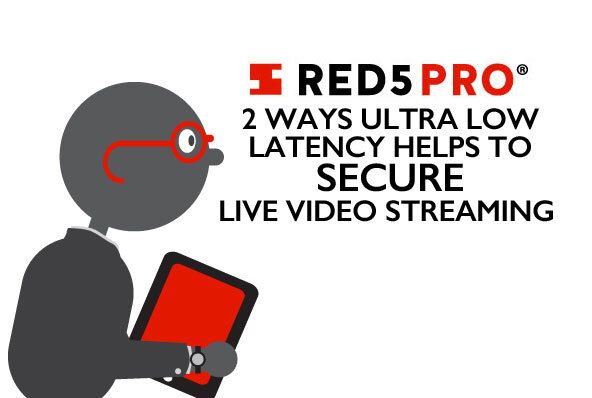 As providers of sports and other live-streamed video add safeguards against surging online theft, they have more reasons than ever to cut end-to-end distribution latency to the vanishing point.

These new ways to secure live video streaming, introduced in response to pirates’ circumvention of protections provided by encryption, revolve around forensic watermarking. While watermarking can’t stop people from stealing and restreaming high-value video, invisible codes inserted into each stream by watermarking platforms optimized for live streaming make it possible to identify and take timely action against the sources of stolen content.

When it comes to effective use of watermarking with live-streamed content, latency considerations play a big role respecting two interrelated requirements:

Before diving into how latency and the lack thereof factors into the complex issues surrounding use of watermarking to secure live video streaming, it’s worth noting what’s at stake in the search for viable anti-piracy solutions. Researchers’ estimates of losses to piracy vary and often don’t break out losses attributable to live content theft, but there’s broad agreement that the totals are skyrocketing.

Digital TV Research predicts losses to online piracy globally will hit $51.6 billion in 2022, representing a 100% increase over a five-year period, while Parks Associates says the total will hit $54.5 billion in 2023. Internet traffic monitoring firm Sandvine in 2017 reported 6.5% of North American households were accessing illegally streamed sports and other live video every month, equating to $4 billion in annual lost revenue. ABI Research said losses to live-streamed sports and other content in Europe totaled $941 in 2019.

In the U.K., a BT-commissioned study of young adults in the 18-24 bracket found that 54% of those surveyed take advantage of piracy to watch sport events. The scale of the impact of piracy on live sports programming is also reflected in a report on illicit streaming of soccer games in Spain, which found the profit loss attributable to piracy came to about 271 million euros in 2016.

Pirates have no trouble getting around encryption provided by digital rights management (DRM) systems with Internet-streamed video and by conditional access (CA) systems in the case of pay TV services. They simply capture and restream the video after it has been decrypted for display on authenticated devices, typically by either recording the video from UHD 4K displays or using High Bandwidth Digital Content Protection (HDCP) strippers to pull in-the-clear video from HDMI links.

In addition, thieves occasionally capture in-the-clear content from device memory as it awaits playback in the buffering process. And there are even methods hackers can use to discover and use encryption keys without trying to decode AES (Advanced Encryption Standard) algorithms by using logic analyzers to read electromagnetic wave or power consumption patterns.

By delivering a user experience with professional-quality EPGs touting multichannel bundles, pirate sites convey an air of legitimacy that abets their ability to garner revenues from discounted subscription fees and ads generated by online ad networks. The illegal services frequently organize the content into multilingual presentations, giving them international reach from anywhere in the world.

All of this has made use of pirate sites more palatable to consumers. A study focused on millennials aged 18-35 in North America conducted by marketing firm LaunchLeap found that out of the 53% who admitted to having used illegal providers to stream TV shows and movies during the previous month, nearly two thirds said that streaming seemed “less wrong” than downloading. Another study by ad agency Anatomy Media found that 24% of 18-24 year-olds in the U.S. who use pirate services believe such activity is legal, and all, equating to 69% of that age group, think it is culturally acceptable.

Fighting Back at Killer Speed

While for much of 2020 the coronavirus pandemic has been a much bigger drain on sports outlets’ profits than piracy, expectations that the scourge will come roaring back have kept enhanced security through watermarking on the front burner. When it comes to using watermarking to secure live video streaming, the old saw “speed kills” has taken on new meaning.

As ever more sports leagues and distributors are discovering, nothing is more damaging to a professional pirate’s business than a disruption that interferes with thousands of fans’ enjoyment of a big game early in the action. Once subscribers to an illicit service discover that service can’t be trusted to get away with streaming such high-profile events illegally, legal alternatives become far more attractive, especially when the disruptions include messages letting viewers know they’ve been discovered committing a crime.

Time-consuming processes common to traditional watermarking techniques used with action against theft of time-shifted content that can take hours, days or longer to get underway are not viable in an environment where the content loses most of its value after initial airing. This has led to an outpouring of much faster solutions based on either of two approaches: server-side per-session injection of watermarks, preferably at network edge points, or client-side solutions that are lightweight and versatile enough to be securely integrated with media players or hardware on any device.

But these innovations have introduced tradeoffs in the choice between server- and client-side injection of watermarks that most providers would rather not have to make. This is where the reduction of end-to-end streaming latency to the sub-half-second level enabled by the Red5 Pro cross-cloud platform comes into play.

Fundamentally, the perceived advantage of a client-side over a server-side solution stems from the fact that watermark injection does not add any delay and the watermark extraction process leading to identity of the source can be performed in a minute or so. Even the fastest server-side injection processes add in the neighborhood of five seconds to end-to-end latency, and extraction can take several minutes.

Faster injection and extraction with client-side approaches results from the fact that watermark identifiers are encapsulated in shorter video segments, which is acceptable in live scenarios because pirates don’t have time to figure out what counter measures to apply, as they would were this method used with on-demand content. In on-demand scenarios, more complex coding stretched across longer segments of content thwarts pirate efforts to compromise the system.

But there are issues associated with client-side watermarking even in live streaming scenarios.

For some license holders the client-side approach is not secure enough. The accessibility of client-based code to skillful hackers, no matter how vigorously the code is protected, is perceived as too great a vulnerability. Moreover, even for those who are comfortable with the client-side solution for live content protection but also need to protect time-shifted content, the fact that they must employ both approaches to cover all bases is far from ideal.

The best of all worlds for providers who would rather not resort to client-side watermarking to enhance live content security can be found by combining the fastest of the server-side solutions with real-time streaming over Red5 Pro-equipped infrastructures. With end-to-end streaming at 200-400 millisecond latency in play, distributors can execute watermarking with a server-side solution that adds a four- or five-second delay while still adhering to the need to deliver their live content on par with broadcast latencies.

This is essential to the viability of server-side solutions. Streaming sports programming within six-second broadcast latency boundaries to prevent “spoiler” revelations of events on the field from broadcast TV viewers has become critical to sports streaming success, as reflected in many consumer studies.

For example, research conducted by Limelight Networks found that 57.7% of surveyed consumers worldwide would be more likely to watch live sports online if they could be sure streams wouldn’t exceed broadcast latencies. A study conducted by Sapio Research for Verizon Media found that 19% of consumers regularly accessing online sports coverage cancel services that don’t stream at broadcast latencies.

Equally important, by giving themselves the option to choose a server-side watermarking option that can be implemented without exceeding broadcast latency, distributors also open the opportunity to take advantage of best-of-breed server-side solutions that support the fastest watermarking extraction processes. Such innovations have made it possible to take effective disruptive action against pirate streams on par with the speed of action attained with fast extraction in client-side watermarking scenarios.

These options differ from the most common approach to implementing server-side watermarking with live streamed content. Known as the “A/B” technique, this entails encoding two versions of the same live video sequence targeted for watermarking, each of which is injected with one of two invisible digital codes that remain unchanged for all viewing sessions.

The system algorithmically assigns a unique sequence of watermarked chunks from the two streams to serve as each user’s identifier. The sequence is communicated to the adaptive bitrate (ABR) manifest file used with each client, which then calls for delivery of A and B marked “chunks” in the designated sequence from the server.

This solves the problem of executing on-the-fly injection of the watermarks into each unicast stream. But purveyors of purportedly superior approaches say they’ve chosen those alternatives because the A/B method adds to the workloads on encoders, increases storage requirements in conjunction with temporarily queueing up A/B chunks in the delivery network and consumes more bandwidth over distribution links to the points where the A/B switching occurs.

Now that other solutions have appeared that claim advantages over the A/B approach with no loss and, in some cases, gains in speed both at the injection and extraction steps in watermark processing, the A/B choice for live-stream watermarking can no longer be taken for granted. Options that enable faster extraction of watermarks significantly reduce the time it takes to identify thieves and disrupt their streams, narrowing the gap in time to action between the client-side and server-side methods to where the difference is of little, if any consequence.

Thus, by utilizing real-time streaming to enable server-side watermarking without creating a lag greater than broadcast latency, distributors have an opportunity to choose a watermarking platform that meets the most rigorous security requirements for both live and on-demand programming, thereby avoiding the need for a separate client-side system. Of course, for distributors who prefer to employ client-side watermarking, reliance on the Red5 Pro streaming platform allows them to execute the enhanced security while keeping latency under half a second, well below broadcast levels.

The Red5 Pro platform can either be independently constructed with a hierarchy of origin, relay and edge server nodes running in private and/or public cloud facilities or operated on CDNs that have partnered with Red5 Pro to offer real-time streaming options on their networks. To learn more about the possibilities as watermarking becomes an essential protection mechanism for live-streamed content, contact info@red5pro.com or schedule a call.