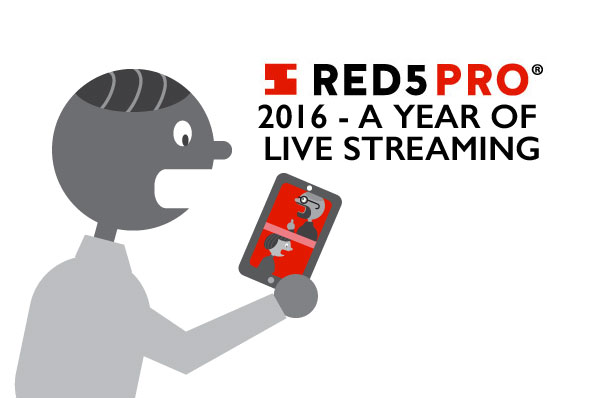 2016 has been an exciting year in the always evolving world of live-streaming. The announcement of Facebook Live, and Youtube Live, propelled live-streaming prominently into the mainstream market. The popularity of these features hold a great potential to drive the future of social media. There are even reports of Facebook paying other companies to make live videos. Is the static selfie image on the verge of being replaced?

The social media giants are not the only ones making waves. The communication protocol leader WebRTC, is gaining ground as the standard for cross-platform compatibility (especially considering how close Safari is to integrating). They are already making gains beyond the tech sector and into the broader business sector. That's good news for Red5 Pro too since we have officially integrated the two platforms.

The Internet of Things (IoT) proved a prominent trend of 2016. This year, Microsoft announced the release of free developer tools and cloud services, the Rio Summer Olympics featured live drone footage, and you can even live stream your brushing habits directly to your dentist. One can only imagine what the future holds... and how many cavities I have.

Most importantly, this year saw the real power that live streaming can have on our lives. In an age of fake news and bias sources, live-streaming provides us with a way of cutting out the middle-man and seeing things for ourselves. Gazing through windows on protests and demonstrations allows us a direct path to seeing what happened. The widely publicized videos of police shootings encouraged a national discussion of social issues. While these videos are in no way the definitive means of proving truth they are an important step towards accountability in protecting citizens. Once the police officers have body cams with live streaming capability, they will be equally protected as well.

However, there is more to it than images of violence. Everyday citizens engaged directly with their representatives in U.S. House of Representatives when Democrats staged a sit-in. Regardless of political opinions, it was a chance to see events personally and the opportunity to form an independent opinion. Therein lies the raw potential of live streaming; the opportunity to engage the surrounding world in an increasingly interactive way. Broadcasts and two-way chats are only the beginning. Live-streaming is going to become more of an enterprise feature and hybrid apps with engaging means of communication are going to become more common. We may be headed towards a world where you can almost literally walk in another person's shoes. What if you could be transported to the International Space Station with Virtual Reality live-stream from an astronaut's body-cam? Now that's the future. Or maybe you have something bigger and better in mind. Let us know. 2017 is shaping up to be a pretty big year, and Red5 Pro will most certainly be there.