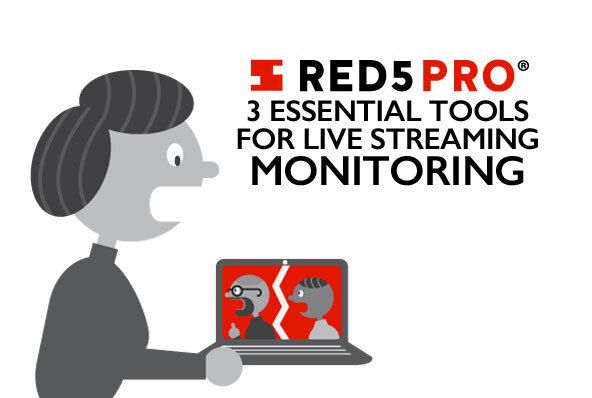 By its nature, video streaming is a quality-sensitive application, especially when it comes to live video. Maintaining a consistent stream is very important. Every video and audio frame has the potential to include key information so mishandling those frames could be very detrimental to the user experience.

In the real world, when things go wrong they tend to happen at the very worst time like the last minute of a big match between two undefeated teams. Any problem at that point can have dire consequences with upset users turning to social media to vent their frustrations and causing permanent damage to the reputation of your streaming platform.

Maximizing stability and ensuring consistent performance means fixing issues as they are discovered. The question is how proactive you can be in identifying problem areas. Waiting for a stream to crash or completely degrade into a garbled mess of lego blocks and static is an easy way to figure out what needs to be fixed. However, it is far from effective. Rather it is much better to proactively identify issues and address them in a timely manner. Fixing problems right as they arise will save money as well. Like a disease, it is better to find a problem in the early stages and prevent the damage from spreading further.

Beyond stream quality, monitoring systems can also collect information like CPU, memory, network, and disk space utilization. The collection of user data can be analyzed to measure different metrics such as the total number of viewers, geographic data, bandwidth usage, and other insights into user behavior. This kind of information can be attained through the use of monitoring services or through API calls designed to gather stream statistics.

The following is a list of three tools that we recommend using to create an effective system for live video stream monitoring. It should be noted that we focused on Red5 Pro autoscaling deployments in this post, but much of this setup could be used for other video streaming systems.

Grafana is a set of visualization and analytics software that displays monitoring data on a graphical interface. According to their website, “Grafana allows you to query, visualize, alert on, and understand your metrics no matter where they are stored.“

Grafana includes an alerting system that can monitor the resources used by the instances and notify system administrators if any problem is detected. In this way, system administrators will always have the most up to date information about their environments and nodes and will be able to quickly respond to any issue that may arise.

For a typical monitoring solution, Prometheus is installed in a central server that acquires the data from a stream source (such as Red5 Pro instances) and manages it. The instances to monitor are specified in a dynamically updatable JSON file that resides on the Prometheus central server.  The instances that need to be monitored install the node exporter software to allow them to capture the data from the operating system and report it back to Prometheus.

Finally, Grafana interfaces with Prometheus to receive the data and display it in a user interface.

Here’s a quick rundown of the steps to deploy Grafana and Prometheus on a Red5 Pro autoscaled system with links to specific documentation.

Prometheus system collects metrics from monitored targets by scraping metrics HTTP endpoints on these targets. To add monitoring targets to Prometheus such as stream manager and nodes you need to use script update_targets.sh.

Now that you have Grafana and Prometheus up and running, we recommend adding one additional tool to your video stream monitoring arsenal: the Red5 Pro Node Checker. Red5 Pro built our own Node Checker specific to live streaming. It is a stand-alone Node.js server that can be implemented into a Red5 Pro Autoscaling environment. Like the solutions above, the Node Checker will monitor the Red5 Pro Edge nodes in your deployment and ensure that WebRTC is properly running.

In practice, the Node Checker periodically retrieves the list of in-service edges and published streams using the Stream Manager API. This is in order to check the health of the edges. If at least one edge and one stream are found, a live stream is randomly selected from the list and an attempt is made to subscribe to that live stream using every edge.

It should be mentioned that the health check is run on a single live stream because it has been observed that when an edge is unresponsive for one stream, it is unresponsive for the others as well. Rather than testing every possible stream, this is a more efficient process.

Monitoring your application is important for making sure that everything is running smoothly. Effective monitoring identifies problems as soon as they emerge and addresses those issues as soon as possible. That kind of efficiency is essential to maintaining customer satisfaction by minimizing any negative effects on the end-user experience. Grafana, Prometheus, and the Red5 Node Checker are all good tools to add stream monitoring to your application.

For more information on how to improve your live streaming, reach out to Red5 Pro. You can send an email to info@red5pro.com or schedule a chat. We’d love to tell you more!