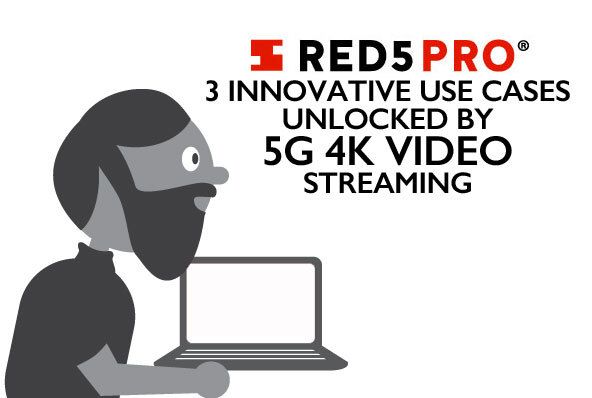 As 5G networks continue to expand across the world, they continue to unlock the full potential of real-time video streaming. With throughput gains of over 20% to 100% over 4G, the high speed connectivity of 5G means you can stream more data and get more out of mobile networks. More data allows for streaming not just higher resolution video such as 4K but also data intensive applications such as VR and 360 degree video.

Increasingly, more and more countries are implementing 5G networks. As examined in one global review of 5G rollouts, all three major carriers in the U.S. now have nationwide 5G footprints, which, as defined by the FCC, means each can access at least 200 million people. Coverage is spreading rapidly in Japan with about half the country served at this point, South Korea is looking to complete full coverage by 202,3 and China’s carriers report they have over 100 million 5G customers.

Coverage is also starting to spread across Europe with commercial operations underway in 18 countries. However some delays have occurred for a couple of reasons; the coronavirus outbreak, and security concerns with the leading infrastructure supplier, Huawei. Another leading growth area is Australia with 5G service now available in most cities.

Additionally, new enhancement codecs such as LCEVC compression will further decrease the size of the video data. As LCEVC is designed to work with a variety of codecs such as VP9, AV1, and others, it will remain a viable piece of technology into the future. With LCEVC compressing the video and 5G increasing the amount of available bandwidth, mobile networks are expanding their support of a variety of real-time streaming experiences.

Of course, faster connection times, means lower latency. Any sort of interaction needs a latency of no more than 500 milliseconds whether it’s conversing back and forth, exchanging chat messages, placing a bid at a live auction, controlling a drone, or a whole host of other applications. WebRTC already supports glass to glass latency of only 500 milliseconds. With faster network speeds that number will only improve making interactive live streaming experiences feel more natural and improving the user experience.

Here are 3 of those streaming experiences that 5G will ease accessibility to:

Virtual reality gaming is becoming increasingly more achievable as well. The large amount of data required for streaming out virtual reality gaming has previously limited these applications to connecting a handful of players over an on-site LAN. Obviously that is a large roadblock to widespread adoption with large groups of players. The increased bandwidth with 5G will help alleviate those restrictions.

Additionally, there are socially oriented multiplayer applications emerging as well. Free apps such as Playroom VR and Rec Room, allow players in avatar mode to interact with each other in settings where they can play paintball, laser tag, darts, and other games. VRChat, another popular app, supports immersive interactions among people watching professional streamers stream game play.

Replicating the in-venue excitement of watching a live game or concert has been a major goal for networks and distributors. The delivery of 180 degree or 360 degree immersive viewing experiences involves streaming a very large amount of data. Prior to the pandemic, VR coverage was beginning to appear intermittently on season schedules in most major sports and was prominently featured during the 2018 Winter Olympics and the FIFA World Cup.

Currently, the biggest proponent of immersive VR broadcasts has been the NBA with dozens of VR broadcasts over the past three seasons. Originally using NextVR, the NBA switched to technology supplied by Verizon’s RYOT after Next VR was acquired by Apple.

Non-immersive (2D) viewing of events is also something under different stages of introduction. Such experiences give the viewer control of which camera angles to view the action from and switching between them. BT, for example, has been offering such viewing experiences with select soccer matches since 2017.

There is also the concern of sports betting. A fast connection speed is needed to ensure that the latency remains low enough to properly synchronize when a bet is placed with what is currently happening in real-time. Any delay opens up the opportunity for cheating as an inside person at the game can communicate with someone on the outside to place a bet before the game shows what happened.

Also, fan walls where panels of screens show the audience members that are watching the event is another way to replicate the fan experience. By having a real-time audience, the athletes or performers can hear the crowd and respond appropriately–or maybe inappropriately depending upon the specific personality involved. Either way, this feedback is what makes live events so exciting which makes recreating that in a virtual setting so essential.

The pandemic has certainly exposed the shortcomings of many virtual education platforms currently available. Fully immersive platforms that could provide a VR experience could prove very useful for a proper recreation of a classroom. Rather than depending upon AI platforms to monitor student behavior and alert the teacher if a student is not focused on the screen, a more immersive experience could allow the teacher to move around a virtual classroom and directly observe the students and their behavior. This could be especially useful for younger children who–more than teenagers–may not have the attention span to focus on a virtual call.

Furthermore, special classes such as art or music will benefit from higher quality streaming as well. Integrating a virtual white board where teachers can write something and share it with the students would be effective for art teachers as well as creating other visual aides in typical classrooms. Creating a direct connection between the instructor can be very data intensive so having more data available would be a very good thing.

Outside the classroom there are training platforms that would benefit from increased data availability as well. Applications such as Sixsense use AR to superimpose a guide over what the trainee sees to help guide them through a surgery or perform a weld. Not only is this safer, but it also prevents disastrous mistakes or loss of extra resources.

More traditional training can be provided as well such as Walmart's use of VR to prepare employees for Black Friday sales by immersing them in a virtual environment with big crowds and long lines.

Of course, the ability to send larger amounts of data at higher quality will improve the user experience across the board no matter what the use case is.

Trends in video-centric social activity, immersive entertainment and live events, remote learning, and much else have made network support for real-time video-rich personal experience a crucial next step in progressing the live streaming industry forward. Not just the industry but for consumers as well. As more and more users start to demand increased access to 5G networks, 5G 4K video streaming, and the real-time experiences that come with it, network providers will feel the pressure to keep expanding 5G availability.

In the meantime Red5 Pro’s cloud-based cluster architecture already delivers fully-scalable, live streaming experiences with sub-500 milliseconds of real-time latency. Currently, we can deliver these experiences over mobile as well as fixed networks across a wide geographic distribution. Our architecture uses a hierarchy of origin, relay and edge nodes to create a delivery network while our mobile SDK–using RTSP–and/or the HTML5 SDK–using WebRTC– transports the video and other data.

Even though we don’t absolutely need 5G to deliver real-time experiences, we certainly welcome its expansion. Afterall, the more data is available the better it is for all of us. The fact that Red5 Pro already supports real-time streaming means that you can get a head start on the competition and anticipate the needs of your users.To learn more about how the Red5Pro platform can be employed to deliver real-time experience over 5G, contact info@red5pro.com, or schedule a call.