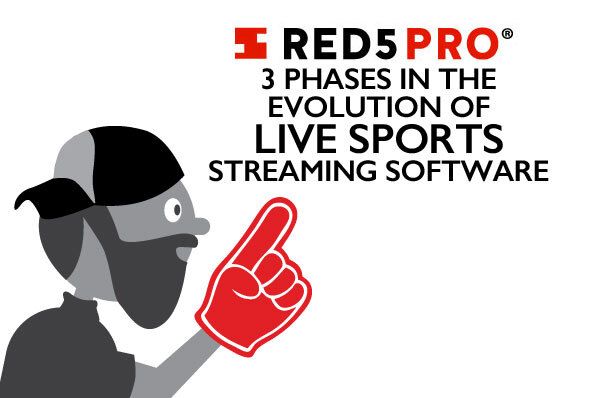 The electric feeling of a live sports event is infectious. The exhilaration of a hard-fought victory or the anguish of defeat all stream through. Broadcasters of sporting events capitalize on that excitement, and trying to replicate an in-stadium experience for fans streaming from home can be a really lucrative opportunity.

How we consume sports content has evolved from passively watching broadcasts with long delays to real-time interactive streaming. When done right, streaming live sports can elevate fans from simple spectators to fully involved participants. For this to happen, though, everything has to flow naturally.

In the early days of the internet (1990s), the only way to deliver video was through plug-ins like RealPlayer, QuickTime or Windows Media Player. The problem is they had to be run outside of the browser or in browsers with a very branded experience that lacked customization. The players themselves had a rather large footprint as they were trying to support a wide array of codecs and features. And playing the video required downloading the file first over often painfully slow dial-up internet connections.

Fast-forward to the early 2000s a new technology emerged. Adobe Flash Player, running a version of Real-Time Messaging Protocol (RTMP), addressed many of these issues and enabled the earliest version of what we would recognize today as internet streaming video. The technology would evolve further with the addition of the video tag in HTML. No doubt the success of Flash encouraged the spread of streaming video and the eventual creation of YouTube.

As a commercial application, however, Adobe Media Server (originally called Flash Communication Server) was quite expensive at around $50,000 per CPU, and an alternative was developed by reverse engineering RTMP. The resulting product was Red5, the open-source predecessor to Red5 Pro and Red5 XDN.

Despite RTMP supporting low latency, Flash would eventually be phased out due to evolving industry trends, including a shift away from burdensome plugins and the need for more mobile-friendly formats. Certainly, Steve Jobs’s infamous “Thoughts on Flash” open letter disparaging Adobe Flash contributed to Flash falling out of favor. Other streaming protocols emerged in the 2010s, including HLS, MPEG-DASH, and eventually CMAF (see our previous posts). Their big advantage, though—scalability—came at the cost of higher latency: 2 to 3 seconds on the low end and 30+ seconds on the high end. High latency may not have been a very big issue when creating experiences that basically simulated watching TV. At around the same time, another approach came about to solve the shortcomings of video chat/communication applications. WebRTC emerged as a web standard allowing for real-time P2P communication. While WebRTC solved the latency issue, it neglected to address the ability to scale the way the HTTP protocols did.

In other words, early post-Flash video streaming efforts can be split into two approaches: high-latency, HTTP-based streaming for one-to-many broadcasts and real-time latency, WebRTC-based streaming for video chats. Since these divergent approaches solved different problems, latency and scalability were seen as equal tradeoffs.

With modern expectations fueling the growth of more interactive experiences for live sports streaming, this trade-off is much less acceptable. Nowadays, the software used to build these streaming experiences must feature sub-500 milliseconds of real-time latency—and then you still have to stream to large audiences, so having to choose between latency and scalability is a problem. That brings us to today’s latest approaches to live streaming.

Modern-Day Streaming and the Demand for Interactive Live Streaming

At the beginning of 2020, the demand for interactive live streaming was already on the rise. Platforms such as Twitch, Youtube, and Mixer (now Facebook Gaming) revealed the consumers’ appetite for watching online competition. The disruption of a global pandemic that shut down stadiums and locked people into their homes only accelerated the need for it: you can’t huddle together with your friends on bar stools or a couch to watch the game, let alone go to the stadium.

Thus, efforts are underway to make virtual experiences as realistic as possible.

One approach is hosting social media watch parties, such as those held by Fox Sports during the 2020 U.S. College Football Championship. Users watching the game on TV or via over-the-top (OTT) streaming watched the second-screen commentary on a Twitter stream that was augmented by real-time overlays displaying the scoreboard, social media posts, stat comparisons and much else.

Early – and some current –  implementations of watch parties and fan walls struggled to fully meet the needs of interactive streaming. Problems arose from patchwork solutions that were cobbled together with disparate technologies. For example, using Zoom or Microsoft Teams to handle the video communication piece and wedging the outputs of these into more traditional CDN streaming approaches.

Sports betting is another time-sensitive aspect that live sports streaming software must address. The bets need to be accurate and registered correctly in the betting system. Individuals placing a bet want the ability to change their bets at the last minute if they learn something new. Gambling organizations want to ensure that everything is fair. If anything is deemed to be unfair, consumers won’t want to continue betting, and organizations could get in legal trouble. The change in U.S. regulations around sports betting has only increased the demand for this feature with all the major sports leagues looking into it.

It goes without saying that these interactive real-time experiences require real-time latency. Any sort of delay results in a stuttered and unnatural experience that lacks the flow of natural in-person interactions. Real-time latency also ensures that all the data stays synchronized. This applies to sports betting as well as watching a live stream as there is other data that must remain up to date such as the score and player statistics. Also of consideration is making sure that different devices and platforms are easily accessible, preferably without a plugin.

All of these factors have led to the adoption of the web standards–based WebRTC protocol. Though WebRTC has been around for a while, its peer-to-peer nature led many people to think it was mostly just for point-to-point communication or a replacement to Skype. As calls for low latency increased, it was increasingly obvious that WebRTC, with sub-500 milliseconds of latency, plugin-free browser support, and encrypted connections, is the only way to meet that need. All that remained was setting-up the right back-end configuration to scale to the modern demands of live sports streaming.

The Future of True Real-Time Streaming

The next step in creating better experiences through live sports streaming software is making it more viable in terms of bandwidth consumption/costs and scalability.

High data costs are a result of the common dependence on content delivery networks (CDNs) to deliver video content. While CDNs are able to deliver video at scale, they are not well suited for real-time live streaming applications. They mostly rely on slower HTTP-based protocols rather than WebRTC. Furthermore, they are designed for unidirectional streaming, sending content to viewers, but they struggle to send viewer data back to the broadcaster. These factors throw up barriers to true interactivity.

Better live streaming experiences such as 360-degree viewing and personalized offerings will involve sending more data. Just because a user has unlimited data doesn’t mean the mobile network will be able to handle it. Of course, many consumers have access to fast and consistent internet. That still causes an issue for companies, though: someone will have to pay for the transmission of all that data.

The solution is to rethink the model entirely. Caching of content across edges in traditional data centers no longer works. A better alternative to CDNs for live video streaming is the recent emergence of an experience delivery network, or XDN. Instead of being limited to unidirectional, high-latency video streams, an XDN supports multidirectional, real-time video at huge scale.

An XDN can be deployed on a cloud infrastructure to become more flexible, better performing, and more economical than physical data centers. Flexibility comes from the fact that server clusters can be spun up in different geographic locations. New cloud instances can be created in order to increase the number of users. Before a large event, a large number of servers can be spun up to deal with an even larger number of viewers. If turnout is lower than expected, any extra servers can be spun down to avoid paying for unnecessary server instances. This flexible, cloud-based hosting model conclusively debunks the myth that WebRTC can’t scale.

In regards to bandwidth costs: a viable option for decreasing data consumption is increasing video compression — sending smaller packets of data obviously decreases the rate of data consumption, but it also increases latency, because the amount of processing the data has to go through delays in how fast the data packet can be transmitted. In other words, finding the sweet spot between a decrease in data consumption and decrease in latency is a balancing act; right now only LCEVC, a new video standard for MPEG, delivers on this challenge.

Furthermore, the increasing availability of 5G networks means that more data will be available to mobile devices. As better live streaming experiences often involve the streaming of more data, 5G networks will unlock more ways to access better streaming experiences. Projects such as AWS Wavelength and Microsoft Azure Edge Zone, provide even more ways to expand mobile connectivity by optimizing the connection between 5G networks and AWS or Azure hosted services. This eliminates the usual latency incurred when that traffic has to traverse multiple hops on the Internet to reach those servers.

This high degree of personalization is possible through WebRTC since the live broadcast is coming through a peer connection to the client from a single virtual machine rather than distributed across different servers as is the case with an HLS-based delivery model.

Singular.live and similar companies have seized on this technology to create customizable, graphic overlays like tickers and scores that will update in real time. Skreens is another great example of a full-featured video studio in the cloud. Such technology increases the potential for more interactive graphics displays for more personalized experiences. By replacing the traditional in-studio kind of graphics packages with a cloud-based offering, it also increases flexibility since video engineers no longer have to be physically present at an event location.

When it comes to watching sports, ensuring that the live stream remains in real-time is important. Though Netflix has made watching TV shows and movies a little more individualistic, sports has remained a shared experience. The roar of the crowd, the chants, and the exclamations of dismay are just as much a part of the game as the athletes. Replicating that experience to fans who can’t be at the game because of a pandemic or for other reasons will increase the enjoyment of those watching as well as the number of those who can join the party. Bringing fans together in small viewing sessions or inserting them directly into the stadium crowd with VR encourages not just interactivity but collaboration. Sports is about creating connections between fans both from the hometown and opposing sides. The joy of sports is what brings them together.

Essentially, sports are all about interactivity. Recreating that interactivity in a virtual setting requires ultra-low latency live streaming with fully scalable, multidirectional delivery: exactly what an XDN provides. Find out more about the new XDN at the upcoming XDN Summit, this February 9–10, 2021, sponsored by DigitalOcean, Verizon, Linode, and Xilinx. The sports panel featuring speakers from Microsoft, Skreens, Singular, and Southworks will be held Tuesday February 9 from 3:15–4:00 pm ET. Let us show you how — and why — you should build an XDN with Red5 Pro.