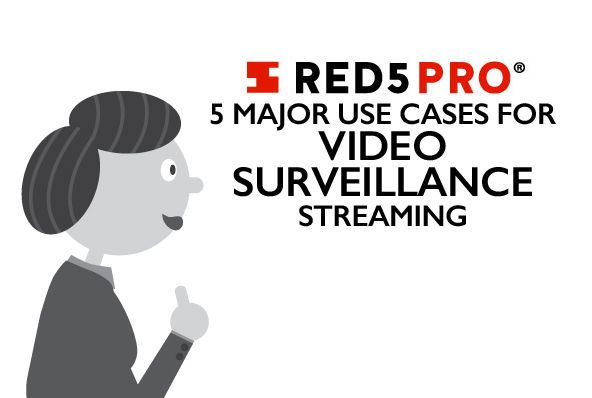 These mission-critical applications require gathering all the necessary information to mount a response as quickly as possible. Effective surveillance solutions use real-time latency to synchronize video and data elements as events unfold. Even with advanced analytics, a high-latency system forces operators to await extraction and pooling of critical tidbits of information from individual video streams to formulate what amounts to an after-the-fact view of developments. In situations where there may be more of a commercial concern (such as factory production, oil drilling, and perimeter security), real-time response is still important to prevent costly damages or thefts.

This high degree of responsiveness is only possible with the recent development of experience delivery network (XDN) technology. An XDN supports the delivery of live streaming video with under 500 milliseconds of latency. A flexible, cloud-based server architecture creates full scalability as well as wide geographic distribution. This is especially useful for surveillance as it is often conducted in different environs such as warehouses, tunnels, buoys, and underwater.

Here are a few different use cases and companies that are using XDN to conduct effective surveillance.

Police need to be able to respond as fast and as knowledgeably as possible to emergencies. Guidance from surveillance administrators tracking wrongdoers in real time can save lives, especially when they can rely on advanced analytics to derive useful information faster from all the relevant points of video coverage.

In a real-time surveillance environment, 911 dispatchers and action coordinators can immediately match the caller’s location with the nearest camera feeds to provide a comprehensive perspective on the perpetrator’s whereabouts. In cases where video content analytics (VCA) is in play, guidance can be enhanced through the automated perusal of multiple live video streams. This provides more information than performing a manual review.

For example, in the event of vehicular flight from a crime scene, the video feeds along multiple routes and from hovering drones can be instantly searched and analyzed to pinpoint a license plate or a vehicle of a certain make or color. When drones are in play, once the fleeing vehicle is found, they can be assigned to track it wherever it goes.

Real-time surveillance will contribute greatly to municipalities’ ability to track accidents, crowd behavior, traffic patterns, and other activities in public spaces. Immediate responses to violations of social distancing and other preventive measures in the COVID-19 era have become an especially significant facet of live video surveillance.

With the application of VCA across multiple live feeds, the smart city vision comes to life. For example, leveraging actionable video intelligence, cities can dynamically update traffic light schedules in response to traffic flows, manage use of high-occupancy vehicle (HOV) lanes, and deliver more timely messaging through digital highway signs. VCA identification of anomalous events as they crop up across a city’s perusal of live camera feeds can trigger preventive action against incipient fires, threatening behavior, robberies, and other emergencies.

FLIR is a leader in surveillance technology that relies on thermal (infrared) as well as visible light captures to provide around-the-clock visibility into the monitored situations. When these components are combined with AI-assisted analytics in real-time surveillance (enabled by an XDN infrastructure), FLIR customers in public safety, transportation, industrial operations, and other use cases gain the situational awareness essential to effective responses to events, noted FLIRs project manager David St. Claire.

Whether surveillance managers are engaged in monitoring and reacting to the “natural flow of traffic and fender benders or major emergencies like fires, hurricanes, and earthquakes, we have a growing need for this kind of [analytics-generated] metadata combined with video to enable real-time reactions to the overarching situation,” St. Claire said. Recognition of such needs is new in some areas like traffic management, he noted.

“The transportation sector has adopted video technology predominantly disseminating video for situations where latency doesn’t matter,” he said, in reference to the widely deployed analog CCTV devices that dot the world’s streets and highways. But conversions to digital cameras are gaining momentum, driven in part by the “opportunity to employ instant management in emergency operations,” he added.

A case in point is the work underway at the California Department of Transportation (Caltrans), which is using FLIR technology with XDN support for real-time traffic surveillance in the highly congested District 7 area of operations serving Los Angeles and Ventura Counties. The benefits to the state are amplified by FLIR’s Cameleon Intelligent Transportation System (ITS) software solution, which supports control over all ITS devices, including dynamic message signs (DMSs), gates, detector stations, and other elements.

The management software also allows Caltrans operators to easily share information with other agencies while maintaining control over their systems. Caltrans has recommended broader conversion to such capabilities across the state.

Real-time intelligent video surveillance becomes more difficult with the volatility and size of target areas in these scenarios. Drones are a big part of the solution.

They are playing major roles in efforts to combat fires, floods, and other emergencies, providing coverage outside the range of fixed cameras and, in the case of smoke-choked air space, outside the range of helicopters and airplanes. And reliance on real-time responses to drone-delivered video has become intrinsic to military and border patrol operations worldwide.

But drones raise the bar in terms of the precision that must be applied with their video output. Synchronous aggregation of those feeds is essential to avoid errors in situational analysis that can occur even with minute distance-related time disparities in ingestion by distribution servers. Again, this is where the real-time streaming of an XDN comes into play.

Matrox provides a wide array of components for surveillance applications, including IP cores, application-specific integrated circuits (ASICs), circuit boards, as well as a variety of imaging-related products such as video controllers, frame grabbers, and 3D sensors. The 3D sensors enhance surveillance performance by applying a dual-camera, single-laser design with embedded vision algorithms in laser triangulations to represent objects and scenes through the generation of individual profiles and depth maps.

Customers of Novetta, a provider of actionable intelligence solutions, are using the XDN platform with systems employed in defense, federal law enforcement, and government intelligence. U.S. Border Patrol units as well as a major U.S. military branch are among the high-profile entities that use Novetta’s real-time multi-intelligence solution, Ageon ISR, to deliver actionable insights derived from sensors and radar as well as video feeds from drones, Humvees, underwater vehicles, body cameras, and even canine patrols to remotely dispersed command centers.

Video surveillance in business has moved beyond security to uses in myriad other applications where real-time visibility will play an ever-greater role.

Video-aided insight complementing data readouts from sensors, meters, and machine components have become essential to tracking and analyzing operational performance in large-scale industrial scenarios such as factories, construction, mining, drilling, nuclear plants, and agriculture. The same is true when it comes to responding to supply chain disruptions at loading docks, storage facilities, and other points of vulnerability to fire, accidents, and other events.

Commercial space operations, too, call for access to feeds from video cameras as well as sensors and other sources onboard spacecraft. Large flows of video and data from myriad monitoring points need to be captured by terrestrial systems and distributed in sync at ultra-low latency to all observation centers.

Where security is concerned, real-time visibility with heavy video coverage indoors and out will not only help catch bad actors but also contribute to deterrence, especially if workers and others understand activities are being viewed in real time.

The same principles regarding security maintenance in government and commercial operations apply with use of real-time video surveillance in and around households. Whole neighborhoods served by a given surveillance provider will generate high volumes of live video feeds that can be ingested for real-time distribution to providers’ monitoring stations.

Real-time surveillance is also a key component to growing reliance on remote monitoring of the elderly and others in need of regular medical scrutiny. Live video will be an essential complement to sensor data when it comes to keeping tabs on people’s well-being 24/7.

As you can see, surveillance is more than just security — although that certainly is a large use case as well. Along with traditional applications like law enforcement and military patrols, video surveillance streaming is used to ensure that traffic is flowing smoothly, daily business operations are progressing efficiently, and at-risk populations receive the support they need.

At some level, all surveillance is about maintaining safety. It's important that information moves quickly and gets to where it needs to go. Compiling information in real-time with a high degree of accuracy is essential for safety and damage mitigation.