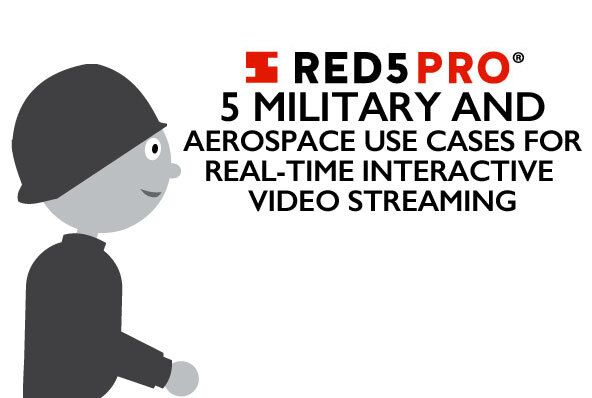 Support for real-time interactive video streaming in any configuration at any scale and any distance is proving to be invaluable to ever more applications tied to military and space operations.

Security requirements obscure much of this activity. But there’s enough that can be said to make clear that performance meeting military-caliber standards is now a viable option for any business, institution or government entity in need of one-to-many, many-to-one or many-to-many video solutions, no matter what the application might be.

Suppliers named here all have in common the fact that they’re providing government defense and space agencies solutions that employ interactive video streaming anchored by Red5 Pro’s Experience Delivery Network (XDN) technology. The availability of such options is enabling turnkey implementations of real-time holistic visibility across battlefields, submarine seascapes and rocket flight monitoring stations that would once have been impossible to achieve.

Wherever dispersed cameras are mounted to monitor developments at large scales, their streamed outputs must be aggregated for relay to command posts, which traditionally results in reception of the streams at variable latencies behind what’s happening in real time. Even with the assistance of advanced analytics to create a composite view, operations managers must await extraction and pooling of critical tidbits of information from the separate video streams to formulate what amounts to an after-the-fact view of developments.

Overcoming these issues gets even harder with use of drone-mounted cameras, which has become a mainstay in the military’s ability to monitor action on a broad scale. There’s a greater risk of errors in situational analysis when distance-related time disparities among camera feeds are constantly changing.

Whether cameras are stationary or in motion, the way to make better use of video monitoring lies with new approaches that aggregate and stream the camera feeds to observation posts in real time. Because today’s digital IP cameras employ real-time transmission protocols, usually Real-Time Streaming Protocol (RTSP) and sometimes Secure Reliable Transport (SRT), the implementation of XDN-based streaming on the final leg results in end-to-end transmission at imperceivable latencies in the 200-400ms range over great distances and often lower at distances typical of military applications.

Whether frame-by-frame synchronization of the feeds is performed at the point of aggregation or reception, real-time streaming makes it possible for commanders to initiate faster, smarter reactions based on their ability to analyze a synchronized holistic view of the action, often with the help of AI-assisted intelligence. And, because the real-time streaming works interactively, they can employ video communications with graphic elements to coordinate with other military units and direct their forces.

Here are examples of how five leading players engaged in support for military and space operations are leveraging the real-time interactive video streaming capabilities of XDN infrastructure:

1. Matrox Video
One of the defense suppliers employing the XDN platform to facilitate monitoring of battlefield operations is Matrox Video, which offers a broad portfolio of cutting-edge products serving the military and other sectors, including commodity and application-specific integrated circuits (ICs), specialized circuit boards and a variety of imaging-related products such as video controllers, frame grabbers and 3D sensors. For example, the Matrox 3D sensors enhance surveillance performance by applying a dual-camera, single-laser design with embedded vision algorithms in laser triangulations to represent objects and scenes three dimensionally.

Matrox has also built highly dense video capture modules to facilitate customers’ use of XDN technology, according to Matrox Video vice president Sam Racine. The unit encodes multiple video and data feeds from drones into a single stream, which is then delivered in real time to distant monitoring locations.

The ability to “spit out many different resolutions, protocols, timing formats” results in a significant reduction in transcoding latency across a high volume of streams, Racine says. “We’re really pushing the envelope with ultra-low latency delivery of high-fidelity video transparently combined with data,” he adds.

AgeonISR, which serves as the Army’s Sensor Command and Control (C2) system, is a cross-platform web application supporting enhanced planning tools, sensor control, video processing and automated triggers, alerts and filters to deliver enhanced 2D/3D visualization of events with interpretive intelligence across the fields of command. Through integrated chat services, report sharing and real-time access to the intelligent visualization outputs, hundreds of simultaneous operators can work together to understand and quickly react to what’s happening in their areas of responsibility.

Simultaneous delivery of video streams is essential to these operations, according to Christopher Regan, Novetta’s director of engineering for C4ISR (the Defense Department’s acronym for Command, Control, Communications, Computers, Intelligence, Surveillance, and Reconnaissance). “If we can't provide that video solution, low latency, high quality, live streaming to a browser, overall we’re kind of dead in the water,” Regan says.

Regan’s reference to live streaming to a browser has to do with the fact that the XDN platform relies on the interactive WebRTC (Real-Time Communications) streaming protocol as the primary mode for real-time delivery of video content. WebRTC, which XDN architecture is designed to scale to an unlimited number of end points with no diminution in video or audio quality, needs no plug-ins because it is supported by all the major browsers.

In cases where RTSP, which is not supported in browsers, is enabled in client players, RTSP-based camera outputs can be streamed in that format over the XDN. Otherwise, the XDN repackages content ingested from RTSP streams for distribution via WebRTC without adding latency. This holds true for the higher resolution SRT-based camera outputs as well.

3. OnAir Systems
Another military-related application in which real-time streaming over XDN infrastructure is playing a big role is entertainment based rather than battle related. This has to do with the viewing experiences OnAir Systems, Inc. has been contracted to provide the thousands of visitors that attend air shows staged by the Air Force’s Thunderbird and Navy’s Blue Angel squads.

As described by Jonathan Hoggard, president of OnAir Systems, the company provides air-show attendees unique viewing experiences by using their smartphones to seamlessly shift across views delivered from cameras mounted in the cockpits and on aircraft wings. At the same time, they’re able to retrieve information about the pilots, air speed, each plane’s position in the formation and other aspects of what they’re seeing.

All the camera streams are fed into OnAir’s ground station where they are processed and ingested onto an XDN server for streaming over the Internet to the nearest peering points with the respective cell services. All of this must happen fast enough to prevent discernable disparities between what viewers see on their screens and what’s happening in the air.

“This is a killer piece of technology,” Hoggard says. “Upwards of 60 to 80 thousand people, sometimes as many as 500,000, are able to watch video streaming real time from the cockpits as planes fly overhead.”

4. Aerospace Corp.
On another front, Aerospace Corp. is utilizing terrestrial real-time streaming via XDN infrastructure in conjunction with video surveillance of operations in space. NASA has contracted with Aerospace, operator of a federally funded space research and development center, to provide agency-wide specialized engineering, evaluation and test services, including expertise in support of mission success.

In order to monitor all video and data streams from rockets on launchpads and in transit, Aerospace’s ground stations capture raw camera and sensor feeds from various locations on the spacecraft for ingestion onto the XDN platform. These inputs are streamed in real time for simultaneous reception at monitoring sites, where personnel employ advanced analytics to deliver immediate assessments of onboard developments.

5. A Commercial Space Transport Operator
Another space-related application of XDN technology implemented by a private supplier of commercial transport vehicles involves transmission of onboard camera outputs from ground-based receivers to multiple company locations. This allows thousands of staff members to simultaneously view the live feeds at launch and during flight.

An executive describing the setup, who doesn’t want the company to be named, said reliability, simultaneity and sub-half-second latency are vital to operations. “You no longer feel like you’re part of a shared experience when you’re watching something out of sync with the person sitting right next to you,” she said.

“More than anything,” she added, “we need a stable platform. With thousands of people watching hundreds of feeds, you can end up very quickly with ten, twenty thousand concurrent views. I need a platform that can scale and grow with that, that won’t topple over as you expand the network and increase the load on it.”

Future Needs for Real-Time Streaming Support in Space Operations
The rapidly expanding space operations agendas of governments and commercial operators point to the likelihood that real-time streaming is destined to become a routine aspect of proliferating day-to-day management workloads. Thousands, if not tens of thousands of new satellites will populate low-orbit constellations in the years ahead as ever more rockets carry satellites to higher orbits and deliver payloads to a multiplying number of space stations.

Ground systems will have to keep pace with the demand for tracking and communications support. One aspect to what’s in store can be seen in a new prototype telescope and ground communications system known as Monocle developed by Aerospace. The trash can sized plug-and-play appliance is environmentally hardened for placement just about anywhere to provide telescope-caliber visibility along with on-board sensor-based awareness to a project’s management groups wherever they might be.

Equipped for Wi-Fi Internet connectivity and powered from a standard 120-volt wall outlet, the device is a prototype for what will likely be large collections of interconnected monitoring systems that can be orchestrated to provide real-time 3600 coverage of any given space operation 24/7. Clearly, the XDN platform is well positioned to be the terrestrial backbone for this new chapter in the Space Age saga.

The white paper entitled “The World Needs a Real-Time Interactive Streaming Infrastructure” is a good resource for learning more about the XDN platform and its role in supporting a multitude of enterprise, government and consumer use cases worldwide. And feel free to contact us for more information at info@red5pro.com or schedule a call.