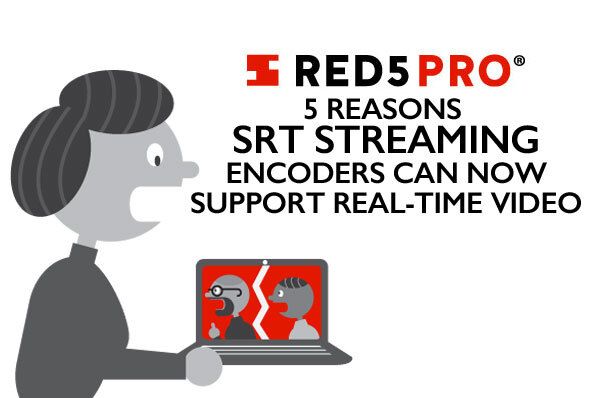 Encoding vendors and their customers who are relying on playout of live-streamed video over Secure Reliable Transport (SRT) to CDNs as the best way to minimize latency actually can do much better if they want to achieve end-to-end distribution in real time.

This may come as a surprise to those who believe they have gone as far as they can with use of SRT in the quest for ultra-low latency. But because SRT is strictly designed for the contribution leg of content distribution, the format has no impact on the latency performance over the rest of the path to end users.

Once ingested into CDNs, the SRT-delivered content is packaged for adaptive bitrate (ABR) streaming, typically via HLS (HTTP Live Streaming) or MPEG-DASH. As a result, even when CDN operators apply the most advanced latency-reducing techniques available with ABR streaming, they add several seconds to lag time between video capture and rendering on users’ devices.

For content providers who would much rather be in a position to reach end users within less than half a second from the moment of video capture, there’s a better way, thanks to improved prospects for achieving real-time streaming with the help of SRT streaming encoders. The reasons these core encoders can now contribute to driving end-to-end latency to the vanishing point include:

These developments have major implications for anyone who relies on distribution of live video content over the Internet, including those involved in remote production and postproduction collaborations as well as people responsible for distribution to end users. Indeed, now that it’s possible to reach millions of globally dispersed viewers simultaneously with no perceivable latency, there’s no reason to think this won’t become the norm in live video operations.

Sports viewers need better-than-broadcast latency performance to avoid the spoiler impact of push notifications or texts from friends at the live venue. Esports viewing, by nature a social activity, is intolerant of latency. Interactive applications, including polling, betting and online auctions, require responses tied to action viewed in real time. And real-time streaming is essential to many emerging applications, such as 3600 viewing, augmented reality, immersive VR and holographic displays.

It all adds up to a compelling case for aligning SRT streaming encoders with Red5Pro. When there’s no discernable latency between the encoding of camera feeds and ingestion of the encoded content on the Red5 Pro platform, every viewer on every device no matter how large or dispersed the audience might be can receive the content at the same instant with no diminution in quality.

Of course, it’s up to the ultimate distributor or distributors of a given live program whether they want to take advantage of Red5 Pro’s platform to achieve real-time delivery to their viewers. But for suppliers of SRT-enabled encoding systems, be they hardware or software based, there’s an obvious advantage to letting customers know their encoders support a much faster alternative to the multi-second latency incurred with CDN distribution.

Critically, there’s no heavy lifting required for establishing a direct flow from SRT-enabled encoders to cloud-hosted Red5 Pro origin servers. The Red5 Pro platform can ingest any stream delivered via SRT as well as other formats, including RTMP (Real Time Messaging Protocol) RTSP (Real-Time Streaming Protocol), MPEG-TS and WebRTC (Real-Time Communications). In all cases, the ingestion onto Red5 Pro origin servers for distribution across the platform’s hierarchy of relay and edge nodes is seamless and delay free.

The fastest end-to-end connectivity occurs when SRT is paired with Red5 Pro’s instantiation of WebRTC. Both transport modes rely on UDP (User Datagram Protocol) as the underlying transport layer with modifications that make UDP a better choice in terms of speed and quality of performance compared to TCP (Transmission Control Protocol) as implemented with ABR video streaming.

But, whereas SRT, by design, is not meant to serve in last-mile distribution scenarios, WebRTC fits the bill as an HTML5 open-source specification supporting peer-to-peer real-time media communications directly between browsers and devices. Content streamed via WebRTC can be rendered in all the major browsers, including Chrome, Edge, Firefox, Safari and Opera, without the aid of plug-ins or purpose-built hardware.

This not only ensures ubiquitous reach for WebRTC streams; it also contributes to latency reduction, insofar as all the decoding is performed directly in native code rather than through protocols like MSE that rely on JavaScript to translate and display the data on the stream.

Moreover, link security provided by SRT through key-based 128- or 256-bit AES encryption is extended by WebRTC. This is an especially rigorous version of link security that utilizes the combination of DTLS (Datagram Transport Layer Security), a derivative of SSL (Secure Sockets Layer), to encrypt the data channel and SRTP (Secure Real-Time Transport Protocol) to encrypt the audio and video channels.

Red5 Pro’s implementation of WebRTC supports other compatibilities that are essential to seamless interaction with live video encoded for transmission over SRT. For example, when the SRT-enabled encoder compresses the content into multiple streams replicating the dynamic bitrate profiles used with ABR transmissions, those configurations are preserved with distribution via Red5 Pro to edge nodes, where the platform streams the content over WebRTC to each user at the bitrates most suited to network conditions and device parameters.

The Benefits of Multi-Protocol Compatibility

Equally important, Red5 Pro extends multi-protocol flexibility to distributors who are targeting mobile devices with live content. In cases where they want to exploit the client-server architecture employed in mobile communications with elimination of complexities intrinsic to peer-to-peer modes used with WebRTC, Red5 Pro gives them the option to use RTSP as the transport protocol.

Given that RTSP, like WebRTC, is based on RTP (Real-time Transport Protocol) and delivers security via SRTP, real-time streaming and link security are preserved. In fact, RTSP is the preferred format for building apps to run on the Red5 Pro platform utilizing the Red5 Pro Mobile iOS, Android or Linux SDKs.

The movement toward alignment of industry encoders with Red5 Pro is well underway. Red5 Pro is partnered with Haivision, inventor of SRT, in support of direct connectivity with Haivision’s Makito encoders. Videon, a leading supplier of compact encoders used in production, has integrated Red5 Pro with its VersaStreamer encoders. And more such affiliations are in various stages of preparation.

To learn more about the possibilities, contact info@red5pro.com or schedule a call.