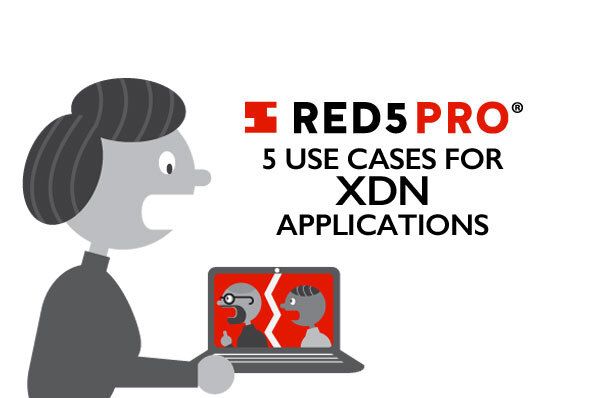 Live-streaming video has changed the way we interact online. Especially over the past year, the increasing demand for interactive video streaming has exposed many issues with outdated streaming solutions.

The internet was designed to use HTTP to send emails, fetch web pages, and cache other static content. Advancements in the delivery infrastructure in the form of content delivery networks (CDNs) opened up the possibility for streaming more data such as recorded content for VOD use cases. However, HTTP was not designed to deliver live video and other dynamic content efficiently. And since CDNs were built on top of an HTTP architecture, they were doomed from the start.

You can't build a skyscraper on a one-bedroom foundation — it just wasn’t designed for that.

Red5 Pro set out to pour a new foundation for live-streaming video. Thus we developed the software behind the concept of an experience delivery network (XDN). Using technology that supports cross-cloud autoscaling for multi-way communications, XDNs provide the infrastructure necessary to distribute synchronized video for advanced live-streaming applications.

An XDN can simultaneously deliver millions of multidirectional live streams with under 500 milliseconds of real-time latency to anywhere in the world. This improved infrastructure unlocks truly interactive experiences previously unavailable with CDN-based technology.

Here are a few applications that demonstrate how XDNs can help reshape our expectations of what it means to participate in an online event.

Some of the businesses hardest hit by the pandemic were concert venues, theaters, and stadiums. Large groups dancing to a mixture of music or cheering their favorite teams are not conducive to combating a pandemic.

Recreating those experiences required natural interactions and smooth exchanges between all the participants involved. Another challenge is the fact that live events often require high-quality video and can involve tens or even hundreds of thousands of people. Otherwise, the experience is choppy and unpleasant. If their “basic” expectations cannot be met, most people would rather skip those events rather than waste their time or money on them.

Thus, a team of veteran live event professionals developed the StageConnect platform. It involves the creation of fan walls where panels of screens show the audience members as they watch the event. Each audience member streams their own video feed — essentially a selfie video. This establishes a gigantic two-way stream between all the audience members and the athletes or performers. The fans get to cheer — or jeer — as they normally would and the entertainers experience the full energy of a live audience. This kind of interaction is especially important for stand-up comedy, since comedians feed off the energy of their audience so they can avoid jokes that don't resonate and lean into those that do.

Corporate events, conferences, and awards shows have also been deeply affected by the pandemic. Pretty much anything involving a gathering in the same physical location became very problematic.

To ensure that the show goes on, Addison Interactive created Eventuall™, an engaging online venue for staging virtual events — including press interviews, theatrical experiences, and conference-style panel discussions — as well as proprietary log-in with ticketing, live chat, break-out rooms (fig. 1), and a managed queue system that brings audience members on the virtual stage to join the conversation.

Eventuall was used for a major international award show that involved the configuration of a managed Q&A system enabling members of the press to interview the nominees and winners, just after their acceptance speeches.

For anyone that has watched an awards show, the red carpet is always a busy and confusing place, so maintaining order was essential. Video chats struggle when two or three people speak at the same time, let alone when a bunch of hopeful interviewers are calling out questions. To pull off this complex feat, they engaged Red5 Pro to create some bespoke tech on top of their robust WebRTC SDK that included stream switching and live compositing.

Furthermore, Addison enhanced the Q&A features of their platform by designing a multi-room system — one for the general press and several others for members of Access Hollywood and other premier entertainment outlets. The press outlets stayed in their own virtual rooms while video feeds from the winners were rotated in. Addison also expanded their screening room tech to include 4K, 5.1 audio, DRM, watermarking, single active sessions, as well as constant user authentication. In short, by providing a secure way to premiere movies coupled with premiere Q&A technology, Addison delivers the kind of really cool — and tech-savvy — premieres that Hollywood craves.

Many office workers have now experienced an entirely virtual workplace. While it certainly has positives and negatives, the benefits of such setups have fully revealed themselves especially in regard to saving money on office space and travel expenses.

A good example of this is recreating broadcast studios and editing booths. Rather than sending a team of video editors to each physical location to broadcast on-site, enabling those technicians to work virtually is much cheaper.

Smooth communication is essential to creating a fully operational remote workflow. A key component of natural, free-flowing conversations is real-time latency such as that offered by XDN technology. The real-time transmission of dynamically updated data elements with video and audio frames ensures that everything stays synchronized so that all team members can see the same thing and discuss it as needed. This enables an editing team to clearly comment on a particular scene or switch to a new camera angle at the right time.

Skreens is an example of a company that uses XDN technology to curate live content on the fly. The company’s platform-as-a-service (PaaS) technology provides browser-based access to an ultralow latency, broadcast-caliber production studio that supports website implementations of just about any video-rich application. Operating 100% in the cloud, they use accelerated semiconductors — Xilinx FPGAs (field-programmable gate arrays) — that support the ability to edit many videos extremely fast, and produce outputs for mobile at standard resolutions all the way up to 4K and even 8K 60 fps. The most exciting part is that the entire process of combining a large number of videos and sending them (as a single stream) to a destination occurs in under 200 milliseconds.

Singular.live, by virtue of enabling browser-based control over the creation of rich graphics overlays in real-time, has been a leading force in leveraging remote production to bring a new level of enhancement to the user experience. Leveraging XDN technology, the platform creates personalized HTML-based interactive graphics such as name overlays among other rich graphics of real-time information for live events.  Producers can switch these graphics on and off and even add animations using an intuitive control panel that is part of Singular.live's tech. When integrated with a live video production suite, on-site or in the cloud (such as Skreens), it can even be used to trigger graphics input from anywhere in the world in under 200 milliseconds on average, regardless of distance or the size of the audience. Moreover, Singular.live uses so-called adaptive layers, which enable it to personalize the information it presents based on a recipient’s device’s language setting, location, and other details culled from their browsing history via queries embedded in the output URL.

Ongoing trends have seen consumer behavior increasingly shifting to online shopping. A typical livestream shopping experience involves live broadcasts of pitches by salespeople or entrepreneurs and, occasionally, by a celebrity host. The underlying platforms support direct in-video purchasing options and chat links that presenters can respond to live as part of the webcast. This extra level of interactivity replicates and even improves upon an in-store shopping experience, reestablishing the effectiveness of good person-to-person sales tactics.

The live-streamed commerce space Whatnot is a good example of one such operation. The Whatnot app is a live auction platform that offers additional functionality, not just a way to buy and sell stuff. Describing itself as a “community marketplace,” Whatnot enables its community to connect and interact in real time during live streams and auctions. The startup's aim is to bring people together, both on an individual basis as well as within already existing communities with shared interests and hobbies. Their process of verifying collectibles makes it easy and safe to connect, buy, and sell. This combination of features creates extra levels of interactivity, all made possible with XDN technology.

Drone surveillance has become a major factor in efforts to combat fires, floods, and other emergencies by providing coverage outside the range of fixed cameras. Furthermore, reliance on real-time responses to drone-delivered video has become intrinsic to military and border patrol operations worldwide.

XDN technology is perfectly suited for these critical applications. Here are a few companies who built their own XDN infrastructure for a variety of surveillance applications.

Customers of Novetta, a provider of actionable intelligence solutions, have built XDN applications employed in defense, federal law enforcement, and government intelligence. For example, Department of Defense and Border Patrol units are among the high-profile entities making use of Novetta’s real-time multi-intelligence solution, Ageon ISR, to deliver actionable insights derived from sensors and radar as well as video feeds from drones, Humvees, underwater vehicles, body cameras, and even canine patrols to remotely dispersed command centers.

Streaming over an XDN infrastructure also helps them monitor and manage the productivity of workers, tools, and materials in real time. Video monitoring complements data readouts from sensors, meters, and machine components to tracking and analyzing operational performance. The same is true when it comes to responding to supply chain disruptions at loading docks, storage facilities and other points of vulnerability to fire, accidents, and other events.

Matrox is another company with ties to the military. They provide a wide array of components for surveillance that include IP cores, application-specific integrated circuits (ASICs), circuit boards, and a variety of imaging-related products such as video controllers, frame grabbers, and 3D sensors. The 3D sensors enhance surveillance performance by applying a dual-camera, single-laser design with embedded vision algorithms in laser triangulations to represent objects and scenes through the generation of individual profiles and depth maps.

FLIR relies on thermal (infrared) as well as visible light captures to enhance surveillance no matter the lighting conditions. When these components are combined with AI-assisted analytics in real-time surveillance enabled by an XDN infrastructure, FLIR customers in public safety, transportation, industrial operations, and other use cases gain the situational awareness essential to ensure effective responses to events, especially in emergency situations such as fires, hurricanes, and earthquakes.

A case in point is the work underway at the California Department of Transportation (Caltrans), which is using FLIR technology with XDN support for real-time traffic surveillance in the highly congested District 7 area of operations serving Los Angeles and Ventura Counties. The benefits to the state are amplified by FLIR's Cameleon Intelligent Transportation System (ITS) software solution, which supports control over all ITS devices, including dynamic message signs (DMSs), gates, detector stations, and other elements.

The management software also allows Caltrans operators to easily share information with other agencies while maintaining control over their systems. Caltrans has recommended broader conversion to such capabilities across the state.

XDN technology has already made a real-world impact; bringing fans “back” to stadiums and music venues, organizing award shows, enabling people to work from home, expanding online shopping, and improving drone surveillance. With flexible APIs, Red5 Pro has simplified the process of configuring customized implementations of XDN applications to meet current and future needs. Live streaming continues to be a space full of innovative use cases. By establishing an XDN foundation those innovations will continue to expand.

Interested in setting up your own XDN with Red5 Pro? Contact us at info@red5pro.com or schedule a call. We'd love to show you how you can become part of the next generation of interactive live streaming.