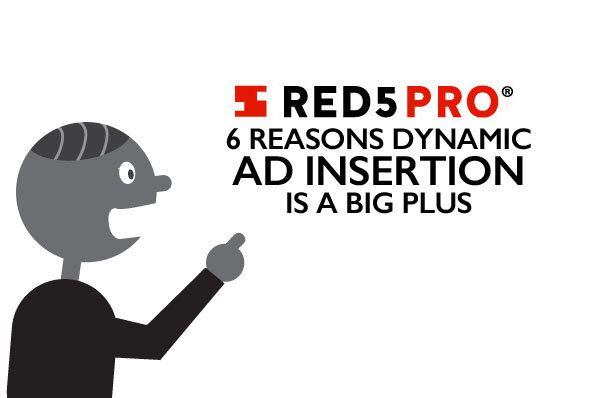 As addressable advertising — that is, the ability to present different ads to different households while they’re watching the same program — gains momentum in the premium video streaming market, providers of real-time video experiences need to be able to support an approach to instantaneous server-side ad insertions that squares with their ultra-low latency mandates.

This important monetization opportunity can be enabled by an experience delivery network (XDN) architecture that supports interactive real-time video applications at massive scale. By virtue of how it orchestrates multidirectional delivery of video streams, such an architecture is inherently optimized to enable real-time dynamic ad insertion (DAI) on a per-stream basis at network edge points.

No matter where a video might be coming from or where it is going, the XDN’s stream management system can direct ads streamed from ad servers over the XDN in real time to strategically positioned DAI mechanisms for synchronous, precise rendering in targeted content streams. As a result, it’s easy to imagine that personally targeted ads could become a routine component of the transformative impact real-time video is destined to have on Internet communications and commerce.

The opportunity for providers of real-time video experiences stems in part from the fact that advertisers, facing diminishing returns on traditional linear TV placements, are feeling greater urgency than ever to reach online audiences. This, in turn, is leading them to take a broader view of digital video advertising with inclusion of high-value video content that isn’t part of the inventory available with Internet-streamed TV programs.

Comcast’s advertising support firm FreeWheel, in a survey of more than 200 advertisers and agencies, found that 52% of agencies were buying digital video as well as traditional TV inventory in 2018 and 91% planned to do so by 2021. Similarly, a survey of advertisers conducted by the Kagan research arm of S&P Global Market Intelligence found that the percentage of respondents who said they were spending 21% to 40% of their TV ad budgets on digital video platforms would jump from 11% in 2018 to 67% in 2020.

This is a phenomenon very much tied to the rise of live sports and other high-value linear content viewed online, much of which — such as esports — isn’t available on TV. Live video traffic, which accounted for just 19% of all IP video traffic in 2018, is projected to account for 52.5% of the total by 2024.

2. Ever More Video Is Moving to Real-Time Streaming

Ever more of this live traffic will be delivered in real time utilizing technology like the XDN platform provided by Red5 Pro. As discussed at length in a previous blog post, there is growing demand for the socialized, real-time video experience applications enabled by XDNs, including the ability to bring audience members together on-screen with live event participants, enable remote video contributions to be shared in real time, engage people in multiplayer games, support networked virtual reality applications, and much else.

3. Addressable Advertising Is a Major Force in Online Strategies

The advertising opportunity for providers in the real-time video space is taking shape as the ability to target ads to each viewer has become a big incentive behind advertisers’ shift to online video. With unicast delivery of streamed video, dynamic insertion of ads based on geographic, demographic or more personalized profiles is easier to execute and scale than was ever the case in TV advertising.

The move to addressability online is outpacing the growth in conventional TV advertising by large margins, according to FreeWheel. In the United States addressable ad buying accounted for 6.25% of the ad campaigns on streamed TV programs, representing a 50% year-to-year increase compared to 20% growth in traditional TV ad sales. In Europe, the targeted campaign growth rate hit 56% with targeting accounting for 25% of streamed TV ad campaigns.

Researcher Rethink Research recently reported that global spending on traditional TV and online video addressable advertising, pegged at $15.6 billion in 2019, would jump to $85.5 billion by 2025, largely driven by DAI online. And this doesn’t count sums paid for targeted ad insertions in TV and other long-form video content consumed on mobile devices or PCs, which gets lumped in with digital video advertising in general.

The pace of growth in addressable TV advertising online reflects consensus among agencies and their clients that the higher returns on ad investment are well worth the costs, including paying higher cost per mill (CPM) rates. According to a  recent survey conducted by the Video Advertising Bureau , 71% of surveyed buyers said they are willing to pay higher CPMs with targeted placements.

The economic rationale is obvious. If, for example, an advertiser pays, say, $32 CPM for a 30-second spot, which by one estimate is the average paid for national TV ads in upfront negotiations for the 2018–2019 US broadcast season, and the ad reaches one million viewers, total cost would be $32,000. But if only 20% of the audience falls within the targeted demographic, then the effective CPM (eCPM) paid for reaching that audience segment through the traditional mode comes out to five times the baseline CPM cost, or $160.

The CPM for an ad only reaching targeted consumers, were it 50% greater than the average CPM, would be $48. Even at two to three times the baseline $32 CPM, the addressable CPM is a bargain compared to the eCPM.

Clearly, addressable advertising presents a major monetization opportunity in the multidirectional real-time streaming environment. The question is, what’s the best approach to doing this?

The focus on server-side DAI in the online premium video market is a relatively new phenomenon reflecting advertisers’ expectations for ad performance that measures up to TV standards with broadcast-caliber video. The browser- and plugin-based approaches to client-side DAI that have long been used in the traditional online video market fall short of those expectations. Not only are such ads vulnerable to ad blockers; placement inaccuracies are common when preset interstitial ad breaks have to be adhered to as opposed to the less precise placements occurring with preroll or intermittently timed ads in video delivered through outlets like YouTube.

But server-side DAI in HTTP streaming scenarios introduces complexities that can and often do create problems as well. The reliance on manifest manipulation to ensure each client calls for the right ad for delivery from remote ad servers for insertion at CDN edge points leads to costly placement misses and adds seconds to stream latency.

The scope of the problem is reflected in statistics that show HTTP-based ad performance whether or not DAI is involved falls far short of the long-established norms in legacy TV advertising. One recent report tracking in-stream over-the-top (OTT) video advertising worldwide across all viewing platforms in Q4 2019 revealed that ads failed to play as intended at least once in 36.5% of the viewing sessions. Most of these failures involved long buffering delays but also included complete misses stemming from mismatches in formatting or errors in ad selection.

6. Real-Time XDNs Offer Much Better Support for DAI than CDNs

There are no manifest manipulations or delays when dynamic server side ad insertion is implemented on an XDN, because the technology employs a push rather than pull approach to getting streamed content to users. (See this white paper for a full explanation of Red5 Pro’s multidirectional real-time streaming platform.) With real-time synchronization of ads streamed from ad servers with individual content streams as they are dispersed from XDN edge nodes, the dynamic ad inserter simply reacts to instructions that link a given ad with specific spot breaks in a given stream, much like what happens when addressable ads are queued up for dynamic insertion into content delivered to individual users from VOD storage over legacy pay TV networks.

Of course, the telemetric messaging involved in associating targeted ads with live video streams is more complex than it is with VOD content, and the ads are being delivered from distant servers. But distance isn’t an issue when the ads are streamed to the DAI platform in real time.

The simplicity, lower susceptibility to errors and elimination of additional latencies makes XDN-based DAI a clear choice over attempts to dynamically place ads through just-in-time packaging used with HTTP-based streaming. This is sure to be an advantage that real-time video providers can leverage in competing for ad dollars as addressability gains momentum.

Stay tuned as Red5 Pro brings to light the details of new DAI support mechanisms we’ll be introducing in the months ahead. Meanwhile, feel free to direct inquiries to info@red5pro.com or schedule a call. If you want to learn even more and see the new XDN technology in action, join our upcoming XDN Summit.