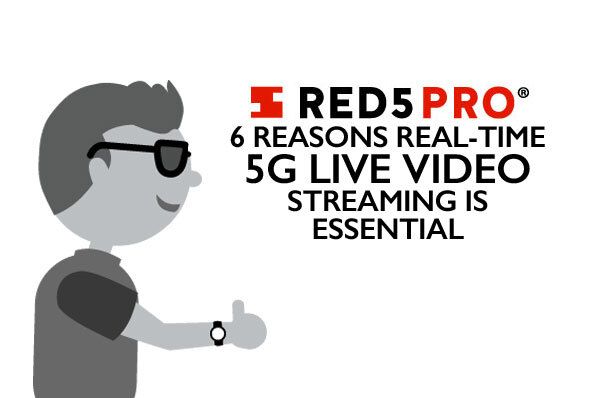 Now that 5G service coverage is reaching mass scales in the U.S. and other parts of the world, carriers have an opportunity to fuel demand for next-gen smartphones and higher speed connectivity by exploiting the power of real-time 5G live video streaming over their airwaves.

Beyond throughput gains that range from 20% to 100x over 4G access rates, depending on the amount and type of spectrum used, 5G brings into play reductions in transmission latency that enable mobile network support for a wide range of applications that 4G isn’t suited for. These include consumer and commercial services that depend on real-time video streaming in the 200-400 ms. range.

As discussed at length in a recent blog, trends in video-centric social activity, immersive entertainment, education, telemedicine, and much else have made network support for real-time video-rich personal experience the defining feature of a new era in cyberspace. And real-time video transmission is becoming a vital component of myriad applications in commercial life as well, from dispersed workforce engagement to video surveillance to immersive collaboration in engineering design, architecture, training, surgery, and other pursuits.

These, along with a host of narrowband Internet-of-Things applications, comprise the types of applications 5G was meant for. But not everything is doable at once, owing to the limited capabilities and goals set by most carriers for the initial rollout phase.

As tabulated in one global review of 5G rollouts, all three major carriers in the U.S. now have nationwide 5G footprints, which, as defined by the FCC, means each can access at least 200 million people. Few other countries have nationwide coverage, one notable exception being South Korea. But coverage is spreading rapidly in Japan with about half the country served at this point, and China’s carriers report they have over 100 million 5G customers.

Coverage is also starting to spread across Europe with commercial operations underway in 18 countries following delays imposed by the coronavirus outbreak and security concerns that have undermined reliance on the leading infrastructure supplier, Huawei. Another leading growth area is Australia with 5G service now available in most cities.

The Need for More 5G Subscribers

But take rates are dependent on 5G phone sales, and there the numbers underscore the need to build demand. This year, 5G sales in the U.S., boosted by a $300 year-to-year drop in average price to $730 as of July 2020, reached 14% of all smartphone sales in August, up from 3% in January and on the way to a projected 20% for the entire year. This factored in expected sales of the new iPhone 12, which at a list starting price of $829 was in the new 5G phone  ballpark.

But total 5G users so far, calculated at 190 million worldwide, translate to a subscriber base representing just 2.3% of all mobile service subscribers. If the industry hits the 750 million 5G smartphone sales mark by YE 2021, as predicted by Qualcomm, the penetration rate among mobile phone users will still only be in the 9% range.

Despite heavy advertising, the sales case for 5G right now is limited by what operators can deliver. The vast majority of carriers here and abroad are rolling out 5G on non-standalone architecture (NSA), which employs software upgrades to expand the control plane functions of existing LTE Evolved Packet Cores (EPCs) to support 5G radio access networks (RANs). These NSA deployments are fine for driving higher throughput with enhanced mobile broadband (eMBB) services but are incapable of supporting the slicing, high cell density, and Ultra-Reliable and Low Latency Communications (URLLC) that will be essential to enabling many of the most promising use cases.

Moreover, while some carriers are using millimeter wave (mmWave) spectrum above 20 GHz and various mid-band tiers in the 2.5-4.2 GHz range as they’re made available by regulators, the larger 5G footprints rely on small swaths of low-band spectrum at the sub-1 GHz level, often through Dynamic Spectrum Sharing with 4G. This restricts users’ access rates to levels that typically top out at about 20% above 4G access rates, which dampens demand for 5G phones.

Costs of Reaching Next Level in 5G Functionality

Getting beyond the NSA eMBB level of service and low-band spectrum limitations with deployments of 5G SA infrastructure and greater use of the abundant amounts of spectrum available at mmWave tiers will cost carriers far more than what’s being spent on the first wave. Along with SA 5G cores, they’ll need to implement more distributed architectures that move intelligent resources to the edge and divide the functions of next-generation 5G node base stations (gNBs) between central baseband units (CUs) and distributed units (DUs) at remote small cell radio locations.

And, with the limited range available with mmWave connectivity, they’ll need to deploy small cells at high levels of concentration. As already measured where mmWave deployments are in operation, these instances are where individual access rates soar above 1 Gbps.

Once more people have 5G phones, carriers will have greater incentive to invest in the infrastructure essential to delivering the marquee gigabit levels of throughput and SA capabilities touted for 5G. Thus, the challenge is to leverage the available infrastructure to deliver applications people want but can’t get over 4G or via fixed broadband services.

This is where the low-latency advantage of 5G over 4G together with even just the current small gains in average throughput to around 50-60 Mbps can be parleyed into driving demand for 5G phone access on existing infrastructure. And with ever more mid-band spectrum opening up for 5G, eMBB deployments leveraging NSA infrastructure at those tiers will likely increase throughput to the 120-240 Mbps levels measured in other countries where mid-band spectrum is in use.

While URLLC technology used with SA infrastructure will get the latency contribution of 5G RANs down to the 1 ms. level that’s essential to autonomous vehicle operations, the ultra-low latency contribution levels achieved with NSA deployments, calculated at 4-10 ms., are low enough to use real-time streaming over a platform like Red5 Pro to support services that will attract more users to 5G phones.

Indeed, as indicated at the outset of this article, the need to support real-time experiences is becoming the leading force behind service evolution across the Internet. Now that exchanges of user-generated videos are fueling a big share of interactions on social media, the ability to engage in real-time on 5G phones could make a big difference to tens of millions of people.

Carriers would be able to create this usage environment for 5G subscribers by setting up their own cloud-based streaming infrastructures rather than relying on traditional CDNs to stream video-rich content into their RANs. This would draw professional providers of every description who are looking for a real-time streaming path to end-users for their applications.

Such services could be delivered independently to mobile users as OTT video services are today or bundled into mobile carrier-branded value-added 5G service packages. For example, as explained in this blog, there’s a growing market of virtual reality headset owners for whom immersive multiplayer gaming and socialization represent attractive use cases that require real-time streaming. Streamed VR applications, with their high bandwidth requirements, could become an especially important incentive for driving signups to eMMB services offered over mmWave footprints without waiting for SA slicing capabilities to kick in.

Red5 Pro’s cloud-based cluster architecture, employing a hierarchy of origin, relay and edge nodes, is designed to deliver such experiences with live-streamed video over mobile as well as fixed networks with scalability at any distance to millions of simultaneous users. This means carriers who operate fixed as well as mobile networks can use the same real-time streaming platform to deliver this new class of services over all connections.

On the fixed usage side, the transmission protocol most commonly used with Red5Pro is WebRTC (Real-Time Communications), client support for which is activated through all the major browsers, including Chrome, Edge, Firefox, Safari, and Opera, without the aid of plug-ins or purpose-built hardware.

It all adds up to the fact that mobile operators have an opportunity to differentiate their 5G services with delivery of a wide range of market-pleasing real-time video applications long before they move to SA 5G. That’s a lot of lead time to drive ROI on infrastructure sooner than later, given the fact that, according to one survey, only 37% of mobile operators worldwide intend to have SA architecture in place by 2022 and just half say they’ll get there by 2024.

To learn more about how the Red5Pro platform can be employed to deliver real-time experience over 5G, contact info@red5pro.com, or schedule a call.