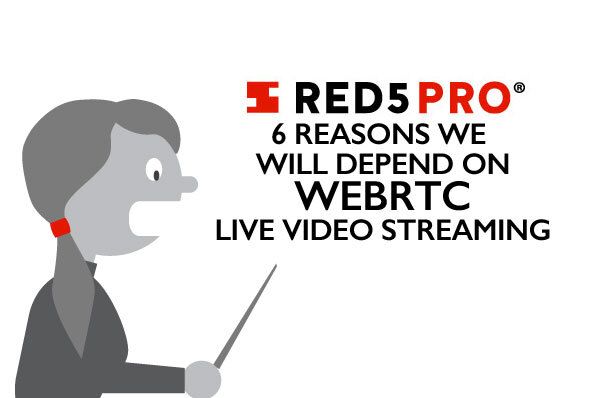 Recent research predicting a massive increase in live video traffic streamed via WebRTC offers another affirmation that interactive video streaming at massive scales is destined to play an ever larger role in consumer use cases over the coming years.

Rethink Technology Research predicts "pure WebRTC" streaming will total 650 exabytes (EB) by 2025 compared to 16.8 EB in 2020. Based on the researcher's assessment that live video delivered over content delivery networks (CDNs) will reach about 3,628 EB by late 2024, pure WebRTC traffic would represent a better than 18% share of total live video traffic by 2025.

Pure WebRTC is defined as real-time video streaming that excludes traffic attributable to video conferencing or the growing volume of instances where CDN operators are using WebRTC to offload live video traffic. "Pure WebRTC is growing much quicker than conventional CDN traffic," said Alex Davies, senior analyst for Rethink TV, the research arm of Rethink's Faultline newsletter. "We think WebRTC makes a lot of sense for conceiving use cases for video content rather than just video conferencing."

Indeed, WebRTC, by virtue of the capabilities embodied in Red5 Pro's experience delivery network (XDN) architecture, can scale at sub-half-second latency across virtually any number of users at any distance. Moreover, the protocol is supported by the five leading browsers, eliminating the need for plug-ins. As Davies put it in a recent blog, "The footprint for potential WebRTC clients has never been better."

At the XDN Summit in early February and in a separate webinar, Davies and Rethink analyst and Faultline reporter Rafi Cohen shared findings pertaining to WebRTC that were part of a report issued in October on CDN trends. Davies also spoke with Red5 Pro to provide further insight into what Rethink sees as the driving forces behind WebRTC usage. Some of the findings reported here are based on extrapolations from the metrics researchers selectively shared from the proprietary study,

The researchers did not look at WebRTC-based video conferencing, but they discussed how operators of private and public CDNs use the streaming protocol to offload live video traffic, which, they said, currently dominates WebRTC usage and will continue to do so through 2025, albeit by a diminishing proportion. Rethink projects the pure WebRTC share of total WebRTC traffic, exclusive of video conferencing, will go from 2.83% in 2020 to 12.8% in 2025.

The surging use of WebRTC as a CDN offload mechanism is a bit of a "dirty secret" within CDN ranks, Davies said, noting the offload strategy doesn't comport with messaging that emphasizes secure, low-latency distribution of live video. "You don't find many CDN providers talking about offload, but the economics seem to make sense," he added.

That's because, when multiple users are watching a live video stream, "instead of sending multiple packets of the same video to everybody, you're sending one copy shared via WebRTC peer-to-peer mechanisms," Davies said. Rethink predicts that by 2025, the volume of live video offloaded by CDNs via WebRTC will equate to 61.21% of the live video traffic streamed by CDNs. Then, as now, some 76% of the offloaded traffic will be siphoned from private CDNs.

Rethink looks at pure WebRTC as part of a larger multi-CDN phenomenon involving any combination of public and private CDNs with or without pure WebRTC instantiations, which is coming to dominate CDN usage for both live and on-demand video traffic. By 2025 revenue generated by multi-CDN usage will total $23.9 billion or 72% of the projected $33.1 billion generated by CDNs' live and nonlive video traffic, compared to $4.78 billion or 55% in 2020.

The researchers believe pure WebRTC usage will really begin to surge during 2023 with the potential to generate $3.7 billion in revenue by 2025, compared to somewhere in the neighborhood of $100 million in 2020. That would equate to nearly 18% of the projected 2025 spend on live video streaming.

It's a trajectory that will likely continue. By 2027 or 2028, it looks like "WebRTC will be taking up more traffic than public CDN offload," said Rafi Cohen.

That seems reasonable from today's perspective on streaming protocol options, but it's important to note that the key factor behind Rethink's expectations is market demand for use cases that require infrastructure support for highly scalable, real-time interactive video streaming. Currently, that's best accomplished with WebRTC, but who knows where things will be in 2025, given the pace of Internet technology innovation?

While WebRTC is the dominant streaming protocol used with an XDN infrastructure today, if something else comes along to supplant it, this won't be a problem for XDN users. The multicloud XDN architecture is highly adaptable, as evidenced by the platform's current support for real-time delivery of video formatted for transport over multiple protocols, including Real-Time Streaming Protocol (RTSP), Secure Reliable Transport (SRT), Real-Time Messaging Protocol (RTMP), HTTP Live Streaming (HLS), and MPEG-TS. In all cases, end-to-end latency is maintained at 400 milliseconds or less through reliance on the Real-time Transport Protocol (RTP), the voice communications protocol on which both WebRTC and RTSP are based.

For now, though, Rethink's focus on WebRTC is well advised. As explained by Davies, a big driver behind Rethink's expectations for pure WebRTC deployments is the situation taking shape in developing countries, where private CDNs dominate because of a dearth of public CDNs. "If you're launching or expanding a video service in one of those markets, you're a much better candidate to go for a pure WebRTC offering, because live video is becoming more important to your delivery," he says.

In other words, why not go for a real-time streaming platform that overcomes the latency and one-way transmission liabilities of a traditional CDN infrastructure? This reasoning points to the advantages of deploying a real-time streaming infrastructure that can accommodate the popularity of sports, esports, and other live event watch parties as well as any other scenario "where there's a social interaction element that lends itself to the real-time video part," as Davies put it. Growth in these areas is "occurring rapidly," he said.

Other, more niche elements on the consumer side are also adding momentum in this direction, he added. For example, esports as well as sports producers "are going to work more closely with betting," he said.

There's also a growing need for real-time streaming in multiplayer game scenarios where participants who get eliminated as well as virtual bystanders want to watch. Typically, that requires the use of webcams, which means people are going outside a social gaming environment like Discord for streaming support.

"It seems like it would be appealing to Discord to retain the video streaming within its ecosystem, which can be done most cost effectively through something like WebRTC," Davies said. Providing users a high-quality, real-time video streaming option within the environment would significantly add to the social platform's appeal, even if it's unlikely any money can be made through usage fees, he noted.

Another niche arena where Davies believes real-time streaming might come into play involves livestream shopping, which, as described in an earlier blog post, is an online replication of traditional TV shopping channels featuring in-person product pitches and chat links between audiences and presenters. "There's definite value in having a digital version of a personal shopper," Davies said. But, he added, the impact on overall WebRTC usage from such applications "seems really limited."

As for the use cases involving live audience interactions with personalities during concerts or other live events, which can be other possible drivers to WebRTC adoption, Davies was skeptical. "The idea of people queuing up to be on a video wall where, if you're lucky your question will get answered, seems really limited," he said.

6. The Need to Find a Real-Time Streaming Alternative to CDNs in Developed Markets

But, Davis stressed, with the live video scenario evolving so fast, Rethink TV will be doing more research to better understand developments impacting demand for real-time video interactivity. Interestingly, while the initial findings point to developing regions as the places where pure WebRTC traffic volumes will be greatest by 2025 with cumulative average growth rates in the 60% to 65%, range, the CAGRs for pure WebRTC usage will be much higher in Europe and North America at 101% and 83%, respectively, over that time period.

The difference in usage volumes stems from the fact that the 2020 baseline was much higher in the developing markets. Ultimately, the emergence of real-time video interactivity as an intrinsic aspect of the live-video viewing experience everywhere could push distributors in developed as well as developing markets to bring everything together on a single streaming infrastructure.

Rafi Cohen suggested as much when he posed these questions: "Are we going to reach the point in the next five to ten years when we can have total WebRTC with a similar amount of exabytes compared to total CDN [video traffic], excluding the offload? Could they both be neck in neck in terms of capacity and capability?"

Whatever streaming protocol proves best suited to meet real-time connectivity requirements in the future, the likelihood is that current CDN HTTP-based unidirectional streaming technology will be supplanted by XDN infrastructures that can provide the support essential to what the market demands. And, of course, that applies to all the use cases beyond the consumer domain where real-time interactive video streaming is taking hold.

The Rethink team has performed a great service laying to rest any notion that anything less than real-time streaming will suffice in the emerging consumer video environment. A broader perspective on what's in store across consumer, public safety, military and enterprise market segments can be found in our white paper: "The World Needs an Interactive Real-Time Streaming Infrastructure."

To learn more about XDN technology and how to use WebRTC live video streaming, contact us at info@red5pro.com or schedule a call.