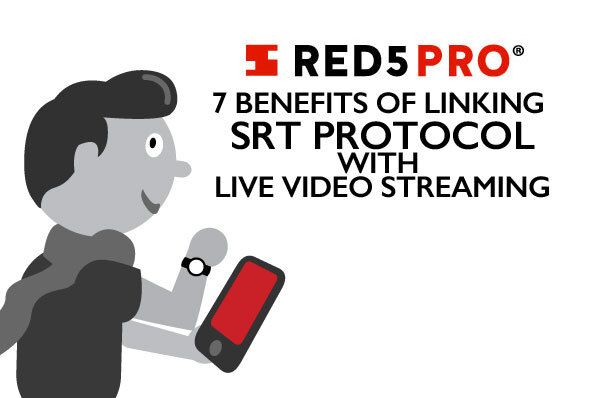 The prospects for streaming sports and other live event programming at ultra-low latency end to end are greater than ever thanks to the synergies between the Red5 Pro platform and SRT (Secure Reliable Transport).

SRT is the protocol developed for video transmission over the Internet that is fast becoming professional video producers’ preferred conduit for linear output to distributors. Red5 Pro’s adoption of support for SRT enables distributors as well as producers pursuing direct-to-consumer strategies to seamlessly ingest SRT-packaged live streams into the Red5 Pro cloud distribution cluster for streaming at ultra-low latency to end users.

As a result, events captured anywhere in the world can be streamed to audiences at global scales within a few hundred milliseconds of production playout. This takes into account the 200-400 ms it takes to reach viewers from ingest to playback through the Red5 Pro cloud cluster plus the time consumed by encoding and first-mile transport via SRT protocol in the live video streaming workflow.

SRT, initially developed as a proprietary solution by Haivision, has become a liberating force for producers of sports and other live content since its introduction as an open-source platform in 2017. This has allowed producers to get their productions into distribution pipelines quickly, securely and at legacy broadcast quality without relying on costly satellite and dedicated fiber links or RTMP (Real-Time Messaging Protocol), the traditional mode used for first-mile contribution over the Internet.

Now widely supported in contribution encoding and player hardware, SRT is readily available for anyone to use with live video playout. Aligning SRT with Red5 Pro creates a direct path to end users that combines the superior speed, security and other benefits that SRT provides on the contribution links with the ultra-low latency, security and browser-based access supported by Red5 Pro on the distribution side.

It’s no coincidence that SRT and Red5 Pro have appeared in the same timeframe to radically alter the premium video industry’s perspective on live streaming. Both, like many other relatively new approaches to streaming video, have benefited from advances in IP-based transport that have made UDP (User Datagram Protocol) the better choice over TCP (Transmission Control Protocol), which, ironically, was invented to overcome the disruptions to streaming IP packets that were common with UDP.

With UDP as the underlying transport layer, SRT is designed to carry programming that is processed for delivery in the legacy TV mode, which is to say, over MPEG-TS (Transport Stream). SRT-capable hardware encoders process the MPEG-TS video for playout, apply 128- or 256-bit AES encryption and map the completed payload to UDP.

SRT, which has been submitted for consideration as a potential IETF (Internet Engineering Task Force) standard, uses Adaptive Repeat reQuest (ARQ) retransmission technology in conjunction with information derived from reception points to dynamically adapt to packet loss, fluctuating bandwidth and jitter. With hardware-based encoding, SRT can deliver content across the world within 500 ms. at 1-3% packet loss rates, according to the SRT Alliance.

Side-by-side testing performed by Streaming Media between various endpoints in multiple countries has demonstrated SRT is 2.5-3.2 times faster than TCP-based RTMP, which is no longer supported by Adobe and many CDNs but remains in use in some live production scenarios. Other factors contributing to RTMP’s demise in professional video production include the industry’s demand for link-level security as provided by SRT, difficulties of provisioning RTMP through firewalls and lack of support for HEVC.

Vastly superior performance over RTMP has made SRT ideal for use on content producers’ contribution links and in other aspects of live production. But the protocol wasn’t designed for use in distribution to end users, which would require an embedded base of SRT-optimized consumer hardware.

Instead, distributors must rely on streaming platforms that can work with SRT-delivered content. To that end, most adaptive bitrate (ABR) transcoding and packaging solutions used by OVPs, MVPDs and CDNs have been adapted to support SRT ingest.

But the conversion from UDP to TCP for ABR distribution is counter-productive to the goals set for the SRT protocol with live video streaming. Even the fastest platforms employing the latest TCP-based latency-reducing techniques will add 2-4 seconds of latency to the end-to-end transmission. The increasingly prevalent need to meet content providers’ requirements for link-level security, which is not natively provisioned with ABR streaming modes, contributes additional delay.

How do you solve this delivery latency problem, and what are the other benefits of linking the SRT protocol with live video streaming through Red5 Pro? Let’s dive into our list of 7 points in no particular order.

In contrast to TCP based delivery approaches, Red5 Pro supports the ultra-low latency attributes of UDP-based distribution with AES encryption built into the encoding process. But, unlike SRT, it does so in a way that ensures every viewer on every device no matter how large or dispersed the audience might be will receive the content at the same instant with no diminution in quality.

Of these, WebRTC is especially prominent in Red5 Pro implementations. The fact that both SRT and WebRTC rely on enhanced UDP mechanisms expedites the transition from one to the other. But WebRTC has the advantage of being a browser-based protocol that can be played from any of the major browsers, including Chrome, Edge, Firefox, Safari and Opera, without the aid of plug-ins or purpose-built hardware.

This greatly simplifies scaling the reach of live streamed content to all targeted users. With a hierarchical architecture that supports instantiation of edge nodes wherever needed, Red5 Pro makes it possible to stream live content for simultaneous reception at ultra-low latency to millions of users worldwide.

4) Compatibility with last-mile distribution via MPEG-TS

The SRT-Red5 Pro combination can also be used to facilitate direct low-latency distribution of broadcast content to set-top boxes that can only receive content over MPEG-Transport Streams (TS). With MPEG-TS as the native transport format for SRT, the Red5 Pro MPEG-TS option can be used to complete end-to-end MPEG-TS transport when content is targeted to such STBs.

Rigorous AES-based security is a mandatory feature of WebRTC. The protocol utilizes the combination of DTLS (Datagram Transport Layer Security), a derivative of SSL (Secure Sockets Layer), to encrypt the data channel and SRTP (Secure Real-Time Transport Protocol) to encrypt the audio and video channels.

Even though SRT and WebRTC/RTSP are UDP based, all these protocols can be used to replicate the dynamic bitrate profiles used with ABR transmissions. Video can be compressed at the multiple bitrates of an ABR ladder either at the point of encoding for SRT playout or at the Red5 Pro origins in conjunction with converting SRT-delivered mezzanine encodes for delivery over WebRTC and/or RTSP. From the edge nodes, Red5 Pro streams to each user at the bitrate most suited to network conditions and device parameters.

7) Optimal use of hardware and software encoding/decoding resources

Whether or not ABR transcodes are employed, both SRT and Red5 Pro align to support whatever level of compression fits the profile used by a given distributor. For example, SRT flows hardware encoded at bit rates supported by HEVC will be conformed accordingly by future versions of Red5 Pro’s software encoding platform. Other optimized protocols like AV1, once it’s ready for real-time encoding, may also be transported over SRT and eventually delivered via a WebRTC-based workflow. Simply put, being locked into h.264 because of a reliance on RTMP is not a long-term strategy.

Clearly, a new paradigm in live video streaming is now in reach with the pairing of SRT-based producer playout and Red5 Pro cloud-based cluster distribution. In summary, the 7 benefits of  live content producers and distributors gain from marrying contribution via SRT with distribution via Red5 Pro include:

Want to learn more about what Red5 Pro combined with SRT can mean for your live streaming use case? Send an email to info@red5pro.com or schedule a call.