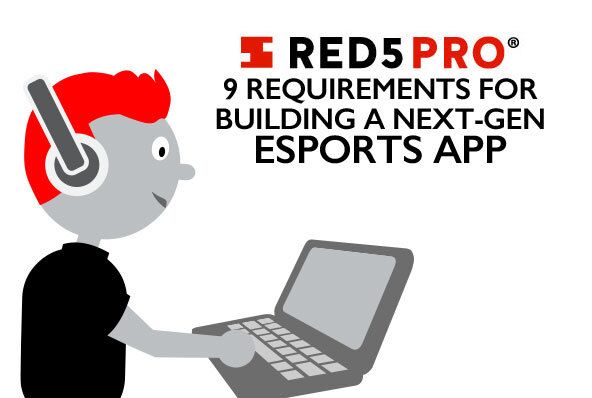 Differentiation that Can Make All the Difference in a Crowded Marketplace

With more esports events competing for attention more than ever is there still an opportunity to create an esports app that stands out?

Absolutely. There’s plenty of room for innovation on the part of any producer who wants to gain an edge by offering users a much more engaging experience than they typically get from what amounts to a replication of traditional sports broadcasts with chat enhancements on the leading esports hosting platforms.

Obviously, any esports production’s prospects for success begin with the game’s (or games’) market appeal and an ability to draw noteworthy players. But, beyond star power, whether the app is focused on a specific community like students cheering on their college esports team or a global audience, app builders will fair best who can deliver a new kind of esports audience experience that makes better use of Internet networking technology than has been the case so far.

Call it the next-gen esports app.

The ability to differentiate through innovation is especially critical at a moment when esports providers are reacting to the downside of being lost in the crowd. It can be hard to justify launching an app on Amazon’s Twitch, where anywhere from 2.2 million to 3.2 million broadcasters, ranging from individuals to professional esports outlets, are streaming videos of game-playing every month. Saturation is also a growing problem with the two other leading providers of esports streaming platforms, YouTube Gaming and Facebook Gaming, which has expanded its esports client base with acquisition of Microsoft’s Mixer platform.

But avoiding getting lost in the crowd is not the only reason to take a build-it-yourself approach. Taking total control over the user experience creates an opportunity to do things that would otherwise be impossible. Producers are finding they need to take control over streaming their own content if they want to control user experience.

Red5 Pro provides an affordable way to create an esports distribution infrastructure that allows high-quality video content to be streamed from any location to all targeted users worldwide at ultra-low 200-400 ms. latencies, which is faster by up to several seconds compared to latencies common to esports distribution. As explained here and elsewhere on the Red5 Pro site, the platform orchestrates clusters of origin, relay and edge nodes running across multiple cloud- computing locations utilizing any of five major transport protocols, including WebRTC (Real-Time Communications), RTSP (Real-Time Streaming Protocol), RTMP (Real-Time Messaging Protocol), MPEG-TS and SRT (Secure Reliable Transport).

To get a sense of the scope of potential differentiation in esports apps that can be achieved with Red5 Pro it’s useful to consider the characteristics that typify online esports services, which are drawing the vast majority of the 480 million users worldwide now calculated to be regular viewers of esports. Unlike esports coverage provided by TV outlets like ESPN, these platforms are able to benefit from the two-way communications capabilities of the Internet, lending a social networking advantage that isn’t available in one-way broadcasting.

Developers looking at the requirements to build a next-gen esports app, along with bringing new capabilities into play, need to match or improve on any of the capabilities already common to leading esports streaming platforms that line up with project goals. These baseline attributes include support for:

Low-latency, high-quality live streaming conveying gameplaying from all corners of the Internet, including multiplayer competition and commentary from professional, collegiate and other esports venues as well as individual play from amateurs and professional streamers, who set up revenue-generating channels to let fans watch them in action.

In-stream chat options, including private as well as public communications, enabling users to communicate with players and fellow viewers during multiplayer events and over individual streamer channels.

Easy, portal-based streaming setup and operation, including implementations of partner channels that enable streamers to record their play for on-demand access by viewers, push notifications to users, personalize their UIs, display selected content when they’re offline and adjust streaming settings for optimal results.

Posting ancillary information complementing tournament play with team and individual scoring updates, player profiles and other data curated for the audience as a whole. Monetization through various means that can include subscription fees, advertising, payments for accessories and voluntary donations.

Requirements for building a next-gen esports app as enabled by the Red5 Pro platform can be broken into two categories: those that entail improvements on the existing capabilities outlined above and those that bring features into play that aren’t supported by the leading esports platforms.

Here are the ways developers can use Red5 Pro to improve on existing capabilities:

Establish synchronized reception of streamed esports content to all users at ultra-low latency. Eliminating timing disparities and cutting video distribution lag times to comport with chat communication latencies transforms the esports online experience into one that’s better suited to the frenetic pace of gaming competition as opposed to passive sports viewing. When distribution is built on the Red5 Pro platform, nobody will be reading on a chat feed about what’s yet to be seen on screen.

Significantly reduce the hassles and costs of scaling resources. This is essential to accommodating peak usage surges and the addition of ancillary video content such as curated gaming highlights and news feeds that can add to the appeal of the esports app experience. The Red5 Pro platform can be deployed in containerized or hypervisor-based virtualized cloud computing environments to support flexible utilization of datacenter resources on an as-needed basis.

Enhance the value of real-time communications in an expanded socialization environment. For example, developers can enable users to create in-app chat rooms tied to specific games or game-related topics. Or they can create an automatic signaling system that lets people know when someone replies to their comments. Capitalizing on Red5 Pro’s real-time communications architecture, developers can choose from multiple commercial chat platforms to find a chat environment suited to their needs or they can build their own chat platform to operate on Red5 Pro’s real-time data channel. These capabilities are exemplified in an esport provider’s engagement with Red5 Pro that supports a co-viewing experience where friends can watch a tournament live with each other, creating a multi-user chat experience centered on the game playing.

Facilitate personalization of the user experience by enabling users to configure ancillary information feeds about players and games. Developers operating their own infrastructure on the Red5 Pro platform can give users a greater sense of engagement by shaping the content of every stream in real-time response to user requests for information.

Enable targeting of event and other push notifications matched to users’ interests. Developers can use their own or third-party data analytics engines to formulate usage patterns from data collected with unicast streaming from Red5 Pro origin, relay or edge nodes to enable more personalized targeting of notifications to end users.

Beyond these gains, developers can employ the Red5 Pro platform to satisfy additional requirements for building a next-gen esports app. Specifically, they can add:

Provide users a richer experience by giving them multiple video streams to choose from as they view a multiplayer competition. In this scenario, users will be able to switch from the curated master flow to watching individual players in response to whatever options are available at any moment in time. Wherever production is performed, there’s no need to limit output to one video stream over the Red5 Pro platform. By virtue of its ability to synchronize all streams for simultaneous delivery, users can switch seamlessly from one stream to the next as often as they want without missing a beat in the action. Users’ choices of camera angles or other streamed content can be activated by app player for unicast streaming from any point in the Red5 Pro hierarchy or all options can be streamed to end users for selection on the client device.

Expand time-shifting beyond the current support for streamer-induced recordings of select game sequences to include availability of replay and personal recording options to all users. In cases where multi-stream viewing is in play, as discussed above, recording options can include the ability to choose which streams to replay and/or record.

Make the game-focused app environment an aggregation point for linear video entertainment as a means of expanding consumer engagement and drawing more advertising support. When users aren’t watching esports or streaming their own gaming exploits, they can be drawn to the site to watch interesting content suited to their demographic which may not be part of the common OTT service lineups. By employing the Red5 Pro infrastructure to support their esports app, developers have an ultra-low latency distribution system that can be used to stream sports and other live content from affiliated providers.

Significantly reduce costs in the case of apps supporting coverage of big tournaments at live venues by eliminating the need to mount a dedicated production operation co-located at each facility. Red5 Pro makes it possible to capture the raw A/V feeds, including on-site announcers’ commentary, from the venue for production at a core facility or in the cloud on Red5 Pro’s production support platform without losing the benefits of end-to-end ultra-low latency. Video from the venue is fed to production over the open Internet using the Red5 Pro transport mechanisms. From there, the processed output can be ingested by Red5 Pro origin servers for distribution over the cloud-based infrastructure to end users.

Developers can bring all these capabilities to life on the Red5 Pro platform utilizing SDKs suited to specific operating environments. For example, if the goal is to leverage browsers rather than plug-ins to support access to the app, developers can build their esports app using the Red5 Pro HTML5 SDK. If they want to conform their apps to the requirements set for apps targeting Apple and Android devices, they can use Red5 Pro’s iOS and Android SDKs. Or they can use the Linux SDK to build an app that can run directly on any device hardware with x86-64 or ARM cores. By using multiple SDKs, developers can build a cross-platform esports app that users can access no matter what devices they’re using.

When all the requirements for building a next-gen esports app are taken into account, the advantages to be gained through utilization of the Red5 Pro to bring a new esports experience to the marketplace are clear. Multiple viewing options; a richer social environment closely synchronized with game play; unfettered time-shifting; personalization of information feeds; the flexibility to expand gaming portfolios and add different kinds of content, and lower production costs – it all adds up to an opportunity for innovation that goes far beyond the capabilities of today’s esports platforms.

Developers who take these steps will find it’s pretty hard to get lost in the crowd.

Interested in building your own esport platform? Let us show you what Red5 Pro can do by sending an email to info@red5pro.com or schedule a call.