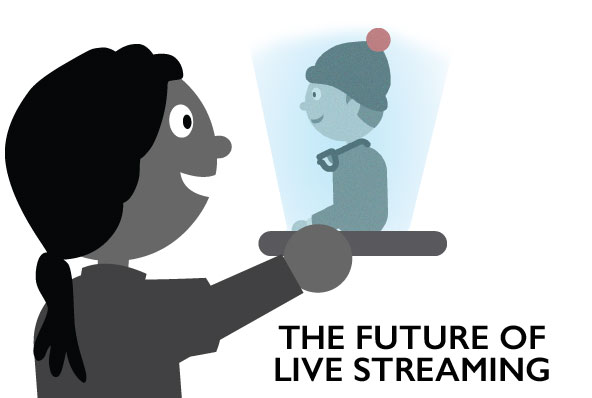 This past Saturday, Chris Allen, Co-Founder and CEO of Red5 Pro and live streaming guru Ryan A. Bell, founder of the Periscope Summit and partner at the video consulting firm Backlamp, hosted a Blab broadcast discussing the democratization of live streaming and the huge implications of future use cases. Here are the five key trends Chris and Ryan believe will shape the future of live streaming.

Live streaming could provide existing non-video applications with an additional layer of virtual interaction. They noted there is an obvious use in adding a video component to the wildly popular dating apps such as Tinder and Hinge. As Chris explained, there’s a company in Boston doing just this with a video-first dating app- “The idea they’re working on is really compelling. They want to help people skip over the likely awkwardness of a ‘blind’ first date via the existing chat-based apps by allowing users to have live video conversations. The video interaction could help take away much of the uncertainty before an eventual date.”

From watching live streams of extreme sports via GoPro’s integration with Periscope, to POV live streaming from concerts and the recent feed from the floor of the Consumer Electronics Show in Las Vegas, giving the average person a front-row experience to share along with other fans has been central to the rise of live streaming. Sure, there are limitations to these new applications of live streaming technology, such as high latency (delayed broadcast) over HLS streams and network connection lapses (Patriot’s Microsoft Tablet fiasco at the AFC Conference Championship game), but that is an inherent part of pushing the boundaries of tech innovation. Perhaps the music industry will follow the success of the Pay-Per-View model, providing fans from around the world instant and dynamic access to sold-out shows; the possibilities here are endless.

After the recent slew of cop-related violence was publicized in 2015, many have demanded that police forces become more accountable for their actions. One obvious solution? Body cams. According to a recent poll, nearly 80% of officers polled “either have body-worn cameras, are testing them currently, or are looking into them.” Regardless of one’s personal stance on the divisive topic, it’s clear that providing live streaming/recorded footage of an officer’s daily activities would transform the law enforcement industry in terms of increased transparency and accountability. From another perspective, if a dispatch team could view their officers’ live streams, they could efficiently jump to action if they noticed an officer was in peril. In either instance, the integration of live cams into the police force would be both a deterrent to unnecessary violence as well as a touchless call-to-action when additional support is needed.

The next two topics discussed have long been considered the most enthralling frontiers of live streaming--integration into 3D experiences and Virtual Reality. This section of the market is still in its infancy, yet many intriguing examples of how the technology will augment traditional content viewing have surfaced.

Tech behemoths like Intel have fought to maintain relevancy by adding cutting edge technology like 3D RealSense cameras into their smartphones: “The 3D camera can go deep inside images to determine the size, shape and contours of objects. As a result, it can capture and identify real-life objects and export them to virtual worlds. The smartphone can be plugged into a headset—like a Google Cardboard—and real world images taken with the smartphone’s camera can be played back as a 3D VR experience.The 3D camera’s gesture and motion control features allow users to hold or interact with objects in a virtual world.”

Last, but certainly not least, the real-life application (we hope) of a cinematic technique which has captivated the masses for decades in such classic flicks as Star Wars, Star Trek and Avatar….

CNN famously beamed people into the studio during the 2008 US presidential elections. Originally inspired by Star Wars in 1977, holographic technology--or at least its application--has been slow-moving, yet the endless possibilities for the beaming of holograms remain intriguing, as evidenced by the influx of capital flowing into virtual/augmented reality startups in the past few years.

YOU can do this today using an old 19th century hack known as “Pepper’s Ghost” which, when employed correctly, creates ghostly objects which fade in and out or transform into different objects via plexiglass and lighting techniques. Click here and here for a few examples of the old school trick. Now just add video streaming using an intel RealSense depth camera and the Red5 Pro streaming SDK and you could be hologram chatting with your boss like Darth Vader.

Don't want to build a glass pyramid, or tired of wearing that cumbersome VR headset to view your live streamed hologram? Let’s hope Magic Leap rolls out their Mixed Reality Lightfield technology soon. Not sure what “Mixed Reality” actually means? Here’s an explanation of the wildly futuristic technology and its differences from VR and AR by Magic Leap founder, Rony Abovitz- "Augmented reality really got attached to looking through the video screen of a mobile phone or tablet or something like Google Glass. And then virtual reality, which has largely been associated with stereoscopic headphone, whether it's Google Cardboard, or some of the other types of devices." In mixed reality, computer-generated images are layered on top of the real world.

Magic Leap has teased the public with some amazing demos, though the company has been tight-lipped about how it will apply its mixed reality lightfield technology in the real world...we hope for answers soon.

While all of these concepts are currently being developed, they only represent the beginnings of what we see as a live streaming revolution. Who knows what else the future holds for live streaming? What do you think? We’d love to hear your thoughts!