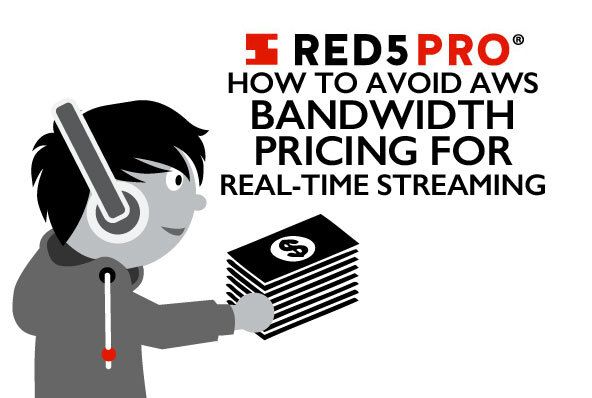 With market demand driving the flow of real-time video traffic ever higher, the need to minimize cloud-to-Internet egress charges imposed by infrastructure-as-a-service (IaaS) providers has become a top priority for anyone engaged in satisfying that demand.

Such charges, which apply to all types of video and other data transiting from the cloud to end users, haven’t necessarily been top of mind in the early phases of market segment transitions to real-time video communications. But with video-based interactivity among dispersed users becoming a major factor in employment, education, social life, and live entertainment, providers of the services and applications supporting these use cases can no longer afford to ignore opportunities to reduce egress cost.

fees have drawn more attention than usual, owing to video surging in all facets of Internet engagement. At the high end, AWS is often the focus of criticism by virtue of its market dominance. AWS has over a million customers in 240 countries served from datacenters clustered in 81 availability zones across 25 geographic regions.

Obviously, they’re a vital player offering excellent services across a vast footprint. So any concerns about egress costs need to take that into account.

And, in any event, AWS, which, like most IaaS providers, ingests data at no cost, isn’t alone in assessing fees that skyrocket in tandem with egress volume. The “Egregious Egress” label one blogger recently applied to AWS could be just as aptly affixed to the fee structures set by Microsoft Azure and Google Cloud Services (GCS).

Of course, users must account for the other costs charged by IaaS providers when comparing options. In the case of live-streamed video, the other primary costs involve the volume of instances in units of CPU resources used by each customer. But while tiered packaging approaches to pricing vary widely, any differences in instance pricing pale next to the differences in egress pricing between the high- and low-priced ends of the spectrum.

The challenge for providers of real-time video services is to exploit the lower-cost options without sacrificing the reach and performance that comes with reliance on AWS and other higher-priced options. Fortunately, this can be done by providers of real-time interactive video services who rely on the multi-cloud Experience Deliver Network (XDN) technology developed by Red5 Pro.

How this is done is explained below, but, first, let’s take a deeper look at what’s at stake. With the exception of small amounts of egress that AWS and Azure allow for free, all three of the leading IaaS providers have set similar prices in similarly structured tiers tied to volume usage.

The first 10 TB tier at Azure, not counting the 5 GB/m offered at no charge, is priced at $0.08/GB for egress out of datacenters in North America and Europe; $0.11/GB for Asian sites (except China), Australia and MEA, and $0.12 for egress in South America. In addition to charging for egress to the Internet, these providers also charge for transfers of data between their datacenters in different regions, typically on the order of $0.02/GB.

The Big 3 egress costs typically range between $900-$1,200 per month for transferring the first 10 TB of a client’s data load each month. It doesn’t take many users to reach that level of egress charges.

If, for example, consumption of a provider’s service averaged just 4 Mbps per user one hour a day, it would take only 185 users to generate 10TB of egress per month. When consumption gets to the levels of a Netflix, the yearly egress tab can exceed $25 million, as reflected in leaked data documenting that provider’s AWS egress fees in 2018.

So there’s a lot of money to be saved with use of IaaS platforms that charge next to nothing for egress. Significant savings can be realized even if such platforms are only used to handle part of the streaming load, as might be the case, for example, if a low egress-cost provider is used to ingest content delivered to users across the U.S. and/or Europe, while content destined elsewhere is transferred to another provider that charges higher egress rates to reach users in those regions.

IaaS providers at the low end of the egress pricing spectrum are often price competitive with the Big 3 on basic hosting charges, which means their egress cost advantages aren’t compromised by higher charges elsewhere. These four IaaS providers typify the many companies in this category:

These are but a few examples of IaaS providers Red5 Pro customers can work with as they build cross-cloud architectures suited to their needs. Some operate at global, others at regional scales.

It’s also important to note that Red5 Pro’s support for engagements that minimize its customers’ egress costs is in sharp contrast to the charge-all-you-can approach taken by other suppliers attempting to compete in the real-time video infrastructure business. Along with the many aspects to these players’ offerings that fall short of the performance standards set by Red5 Pro, their willingness to over charge for egress is another reason to have second thoughts about using them.

For example, Millicast, which leverages the DigitalOcean IaaS, levies excessive egress charges notwithstanding the fact that Millicast’s customers, just like everyone else, should benefit from the next-to-zero egress rates cited above.  Similarly, Phenix, which uses a hosted service model primarily operating on GCP, sets egress rates that amount to a high surcharge over what it pays GCP. While we understand that these are for profit businesses, and they need to charge for their services, we see many of our customers moving away from these groups due to their exorbitant egress fees.

Perhaps worst of all, Agora, which offers support for real-time video running on its own datacenter resources, uses a per minute per stream model. While Agora doesn’t slap egress charges with this model, they still charge fees that are arbitrarily higher than any costs incurred with the transfer of data to the Internet. In other words, Agora follows the pricing practices that have drawn ecosystem ire toward the Big 3.

Customers working with Red5 Pro encounter a much more user-friendly environment. They can instantiate XDN infrastructure on any combination of several IaaS platforms knowing egress charges will be pegged strictly to what those platforms charge.

No matter what combination of cloud platforms the XDN is running on, customers will be able to support any number of interactive users at any distance with end-to-end latencies no greater than 200-400ms. XDN architecture makes this possible through automated orchestration of the hierarchies of Origin, Relay and Edge Nodes that can be implemented on these virtualized cloud facilities.

Cross-cloud operations with AWS, Azure, Google Cloud, and DigitalOcean are enabled by pre-integrations of XDN Custom Cloud Controllers. These controllers translate commands generated by the platform’s Stream Managers for interaction with these providers’ API calls. Beyond this group, interoperability of XDN infrastructure with Linode, Oracle, Vultr, and a dozen other IaaS providers is achieved through a single Cloud Controller that interacts with HashiCorp’s Terraform multi-cloud toolset.

Terraform translates IaaS resources into a high-level configuration syntax that allows APIs to be abstracted for access through a Terraform Cloud API specific to each provider. XDN Stream Managers, communicating through the Terraform Cloud Controller, leverage each Terraform-configured provider’s APIs to manage the relevant XDN clusters.

The XDN OS can manage any combination of contractually available Terraform-compatible IaaS resources as holistically integrated components of the entire live streaming infrastructure. In addition, the Red5 Pro Stream Manager can be manually integrated to work with the APIs of any cloud provider that isn’t integrated with Terraform.

The automated node configuration and routing capabilities of the XDN architecture enable servers in all node locations to be turned up as needed to provide support for streaming content in any direction. Thus, any node location can be equipped to provide Origin Node support for ingesting content from proximate users with routing executed from there across the most direct node paths to other users.

Fail-safe performance is supported no matter how many IaaS providers are supporting an XDN instantiation. Cluster-wide redundancy is enabled by the Stream Manager’s autoscaling mechanism using the Cloud Controllers working through each cloud provider’s APIs.

With persistent performance monitoring of all engaged IaaS providers, the Stream Manager can instantaneously shift processing from a malfunctioning component within a node to another appliance in that node. In the event all of a node’s appliances go offline, the processing is shifted to another node with minimal disruption to the flow.

These capabilities also apply to XDN-wide load balancing. With translation of the commands of the XDN OS to the API calls of the cloud operators, the Stream Manager can execute the load balancing essential to persistent high performance across the entire infrastructure without manual intervention.

Critically, Red5 Pro customers’ flexibility to use whichever Terraform provider platforms they choose is facilitated by mechanisms that mitigate any disparities in approaches to virtualization between a Red5 Pro customer and an IaaS supplier.

Thus, customers accustomed to working with virtual machines running on hypervisors in a currently used cloud have the option  to leverage an exclusively Docker container-based IaaS provider that utilizes Kubernetes to orchestrate containers. In such instances, the Red5 Pro Terraform Cloud Controller directly interfaces with the Terraform Kubernetes Provider, which performs the abstractions necessary for conformance with the containerized environment. Likewise, there’s an OpenStack Provider that allows a container-oriented video service provider to work directly with an OpenStack-based IaaS provider.

Clearly, all of these capabilities make it worthwhile for real-time video communications providers to pay attention to the egress cost disparities among IaaS providers. By doing so, those who employ XDN infrastructure to support their services can contract for the IaaS resources they need knowing they don’t have to be captive to the price shocks associated with “egregious egress.”

Much more about the functions of XDN architecture and its use cases can be found in this white paper and the many blogs on the Red5 Pro website. For guidance on how to take advantage of the multi-cloud capabilities of XDN architecture, contact info@red5pro.com or schedule a call.