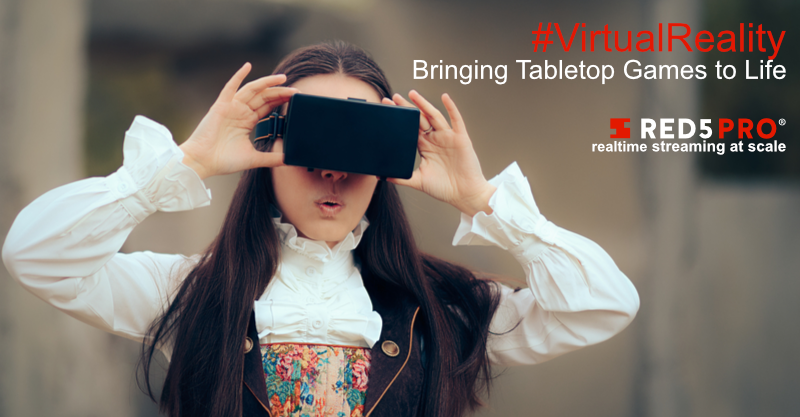 The tabletop game industry is booming. Just the board games market - a subset of the tabletop industry - is expected to increase by over 3 billion by 2026. It’s no surprise that companies and individuals are wondering how they can bring this market online. As mentioned in a previous article, there is significant potential for tabletop games to break into the online gaming space, especially since their popularity rise during COVID-19 lockdowns. Although groups have long met via video conferencing apps, there is increasing demand for new interactive ways to play tabletop games.

Take Dungeons & Dragons (D&D), for example. This tabletop role-playing game has seen a massive resurgence of interest over the past few years, breaking out of its cult following to a wider audience thanks to pop-culture phenomena. Over the past few months, Google searches for Dungeons & Dragons instructions have increased by 600%, due to the portrayal of the game in the TV show Stranger Things. Additionally, the D&D podcast Critical Role broke into the mainstream during the pandemic, introducing hundreds of thousands of people to the game and enchanting both die-hard fans and those who had never previously played. Part of what made the show so popular, though, is the team behind the podcast. The Critical Role cast comprises professional voice actors who help draw fans into the story and, just as importantly, represent a group of friends with an entertaining dynamic.

The magic of tabletop role-playing games like D&D is that the environment and action can be anything at all; it relies totally on imagination. Much of the success of a D&D campaign depends on the storytelling and worldbuilding done by the game master, who designs the storyline and immerses players in the journey. It also relies heavily on the players, their excitement for the game, how they interact with the story, and their relationship with the group. The trick in translating real-life play to virtual is not only keeping the story and gameplay compelling but also maintaining group dynamics. It still needs to feel like players are spending time with friends in real time. Online platforms like Questhaven are working to make this happen.

Questhaven is a tabletop game simulator that was fully funded through the crowdsourcing platform Kickstarter. Designed specifically for role-playing games, Questhaven lets users design the environment where their story takes place and import the rules for whichever game they are playing, such as Dungeons & Dragons, Pathfinder, or ShadowRun. Players can switch between desktop view for world design and virtual reality (VR) mode for gameplay.

Desktop mode allows a user to design the map of the game environment, adding land, water, buildings, and non-playable characters. It also gives them control of the board during gameplay so that they can add new characters or obstacles in real time. If the designer then wants to play as a particular character, they can easily switch into VR mode and join the group.

VR mode is where the main gameplay takes place. In VR mode, players can either have an overhead view of the whole map and move their character around by hand as they would on a board, or they can step into the shoes of their character on the board and see from that character’s perspective. This allows game masters to take on the role of any new characters that their team runs into.

Virtual reality helps keep group dynamics alive while playing tabletop games from a distance.  Game masters roll dice across the map as they would in person and, in the character view, players can see and interact with each other as well as with the environment.

Real-time interactive video streaming is an essential part of making the online tabletop gaming experience immersive. As described in a previous post, multi-participant virtual reality use cases involve constantly transferring data in multiple directions. With a tabletop game, every movement or change that is made in the game environment has to be broadcasted to each player in their own distinctive viewpoint at the same time. One way to ensure that this is possible is through the use of Red5 Pro’s upcoming multi-cloud Experience Delivery Network (XDN) infrastructure. XDN enables providers to broadcast at scale with latencies under 400ms, so that player interactions feel natural and timely. Additionally, Red5 Pro is working on increased support for game engines like Unreal so that developers can easily incorporate live streaming capabilities into their game design.