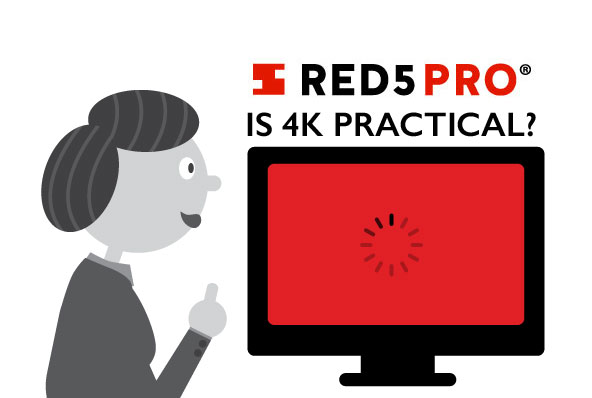 Have you ever bought a tv with the very latest in super-premium, mind-blowing display technology only to realize that it's almost too cutting edge? You turn it on and it's amazing! Any more detail and you'd be seeing into another dimension. Then your internet takes a nap and you realize that even though you have more pixels than raindrops in a storm cloud, it doesn't matter if you don't have a fast enough connection to handle all that extra data.

A similar issue was covered by a recent blog post in which Chris Kranky explored whether 4K video for WebRTC is achievable. His conclusion is that while technically possible, the bandwidth required for such a thing isn't practical with today's Internet infrastructure. However, this doesn't entirely rule out 4K WebRTC. While his analysis is spot on when considering a video conferencing use case, this isn't always true for a one to many broadcast.

Let's break it down. Live Streaming and Video Conferencing are two very different animals, and it's important to understand their differences in order to assess the viability of using 4K quality video.

For a video conference system, you need an upstream and a downstream for each user of the system. Sending out 4k video would require at least 15 MBPS up and down. With a one to one setup, that might be okay on some Internet connections. However, once you add an additional user, you need another 15MB in both directions for that connection. Since most people don't have an internet connection able to handle that much data, conferencing would be impractical.

Alternatively, a one to many broadcast presents a more viable scenario (as Chris already mentioned in his post). Considering that global internet speeds are increasing, your connection should be able to handle simply viewing the stream (like Netflix). Granted their on-demand system can introduce a nice sized buffer to allow for hiccups in the stream, but the main concept of only one stream coming down the pipe is still relevant for a low-latency live WebRTC stream.

Red5 Pro can handle 4K streams without any problems, so as long as the broadcaster has the bandwidth to send the stream, we can scale to handle millions of concurrent streams to individual clients who have at least 15MB of bandwidth on their downstream. If Netflix can do this with MPEG-DASH, then you too can stream high-quality 4k video to your viewers with under a second of latency.