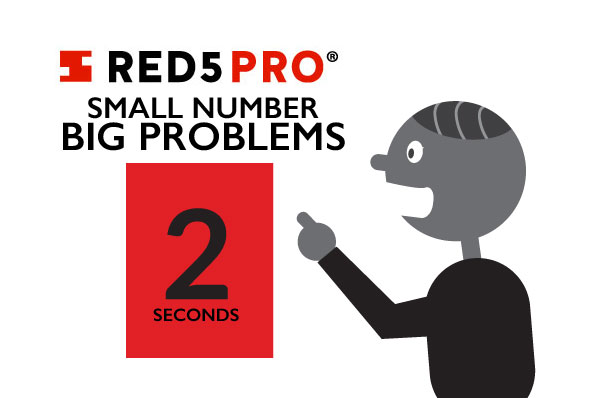 Two seconds doesn't sound like a long time, at least out of context. However, in some situations, two seconds can be a very long time indeed. Let's say you are driving down a highway. It's a dark night so not many people are out and the road is wide open allowing you the freedom to just cruise along. Suddenly, a dog jumps out of the bushes, chasing a rabbit across the road, right into your lane. Are you going to... wait... two... entire... seconds to do something?

When time really matters, even a seemingly small amount can be significant. Everything is happening right there, in real-time. When trying to capture those moments in, say, a live-stream, every second counts.

As such, it's perplexing to see words like "ultra-low" used to describe a two-second latency. There's nothing "low" about that, let alone "ultra". That just sounds like a cheap, flashy sales tactic.

Now for those seeking true low latency, take a look at Red5 Pro. Our implementation (humbly) boasts a latency of under half a second. That, simply put, is low. Now we could go all out and call it "Super-Mega, Ultra-Crazy, Low-Latency". We could even stick a giant inflatable gorilla on the roof or maybe one of those wacky, waving, inflatable tube-men.

Rather than sounding like fools, we'd rather be taken at our word. We can provide low latency, that's actually low, pure and simple. So it's up to you whether you lag behind with high latency, or lead the pack with low latency. If you want to be a leader, we can guide you.