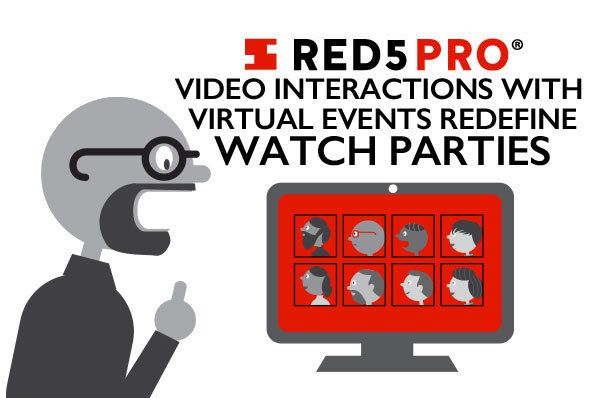 Social media and other outlets now flooding the marketplace with watch party features are setting the stage for more advanced co-viewing experiences.

The pandemic-fueled outpouring of these watch-party initiatives can definitely be seen as a testament to surging consumer demand for real-time video engagement with all kinds of streamed content. However, they can also be seen as rudimentary demonstrations failing to fully meet that demand, especially when people are sharing viewing experiences with live events.

Indeed, these new viewer-engagement initiatives will seem quaint by the standards of experience now taking shape with productions of concerts, award shows, consumer product rollouts, sports, esports, and other points of participation where the connecting fabric is an experience delivery network (XDN) infrastructure. In these scenarios, real-time video communications at persistently high levels of A/V quality can involve tens or even hundreds of thousands of people.

Because all streams from the live event and also from users are occurring in real time over an XDN, there's no need to set up a separate watch-party platform to support the video chat component. Everybody is seeing everything at the same time, and there's no limit to how many people can be involved.

The Drawbacks to a New Crop of Watch Party Apps

That's a long way from the offerings of major players like Amazon, Hulu, HBO Max, and Disney+. Over the past year or so, all have launched watch party features in their apps consisting of a shared video feed synchronized between a group of people with a shared text chat, with the exception of Disney+'s GroupWatch, which only allows user communications via emojis. Additionally, Sling TV — a part of DISH Network — and Facebook created a similar co-viewing experience with a very important addition of video chat support. In order to use video chat with the other major players listed earlier, users can download browser extensions from startups such as Scener, Teleparty (formerly Netflix Party), Squad, Twoseven, and Metastream. Kast is a standalone mobile and webapp that also supports video chat.

In most of these cases, however, watch party participation is limited to just a few people. For example, no more than eight people can share a viewing experience on Facebook’s Watch Together platform.

Moreover, nearly all these offerings are designed for shared viewing of on-demand content where the app takes care of ensuring the chosen video file is streamed at the same time to all participants.

The one exception in this group is Sling Watch Party, which Sling TV claims is the "only way to watch live TV while video chatting", although no more than four people can join a shared viewing session.

There are also some live video chat–enabled watch party apps now available from various entities working with the NFL, NBA, soccer leagues, and other sports organizations, albeit with tight limits on the number of participants. For example, Yahoo Sports had a four-person limit on the watch-party feature it added to its mobile app in conjunction with the start of the 2020 NFL season.

Most of these options also suffer from poor video and audio quality on the interactive streams. Moreover,  watch parties of live-streaming events often are hampered by out-of-sync viewing experiences caused by differences in per-stream latency performance of the primary content on an HTTP-based streaming infrastructure. When people's comments about what they just saw are meaningless to those who haven't seen it yet, the watch party becomes a spreader of the spoiler effect.

All of this is a long way from what can be done with watch parties or other approaches to interactive video engagement over an XDN infrastructure. Examples of what's in store — what could be called watch parties on steroids — can be found in an abundance of emerging use cases, such as those enabled by software platform developers StageConnect and Addison Interactive.

StageConnect's enterprise-scale virtual event technology is bringing video-rich interactivity to live events on an unprecedented scale of engagement with audiences. According to StageConnect CEO Cole Morgan, the company has developed a software platform that enables real-time exchanges between as many as one million concurrently connected users and event personalities.

"StageConnect is becoming a must-have technology for large events with live performances, so scalability and reliability is critical," Morgan said in a discussion with Red5 Pro. "Our tagline is 'we believe live means a two-way interaction.' Our technology allows speakers on stage to see the entire audience and interact with them individually in real time."

With walls of screens displaying feeds from remote or in-venue participants, speakers can call on anyone and see the chosen person highlighted on a bigger display for the duration of the discussion. "Everyone watching remotely is getting the live feed from Red5 Pro, and we're gathering all their video feeds into Red5 Pro for viewing at the venue," Morgan said.

Currently, StageConnect's XDN covers North America and Europe. Anyone connected over those regions can interact with anyone else via video feeds within the XDN's 200 to 400 ms real-time latency window. "The more confined the coverage is geographically, the closer we can get to 0 latency," Morgan noted.

StageConnect has been focused on three types of use cases for its platform, including concerts, big corporate gatherings for sales kickoffs, seminars, training, and routine small-scale company meetings among managers and employees, most of which would be possible without XDN technology. "We believe Red5 Pro is the only company in the technology landscape that will allow our product to scale to the levels we need." Morgan said.

It helps, too, that Red5Pro has been able to work with StageConnect to customize the XDN for its needs. "We have a tight integration with Red5 Pro that allows them to build specific components that enhance use of our technology on their platform," Morgan noted.

Another approach to socializing engagement in live events that goes far beyond the mainstream watch-party apps was described at the recent XDN Summit by Scott Clay, founder and CEO of Addison Interactive. With Addison’s Eventuall Virtual Event Platform leveraging XDN technology, "people can attend events in interesting ways and feel like they're part of the community without traveling to the event," Clay said.

Eventuall is powering scenarios like the media center for a major U.S. awards show nationally televised in 2020, Television Critics Award press tour events for The CW Network in 2021, and a wide range of consumer-facing events involving video interactions between participants on stage or the playing field with people in the seats or in online viewing audiences. "We're opening up entirely new virtual experiences that otherwise wouldn't be possible," Clay said prior to the event.

In the case of the major awards show, which Clay said he wasn't contractually allowed to name, winners were able to interact online with distant press members in sessions that brought participants together on-screen for real-time discussions synchronized with graphic embellishments and the feel of a professional TV news production in HD quality.

"Bringing everybody together was a complex challenge," he added. There were 128 servers powering the event and a control room enabling press and other participants to see all the winners' videos as well as the live captures of individuals participating in the press exchanges, with everything flowing in all directions in real time over the XDN.

These use cases typically employ screen walls enabling everyone on stage as well as the viewing audience to see all participants. Such capabilities are part of the modular Addison toolkit, which allows platform customers "to pick and choose elements to configure for that event," Clay said.

Elements can include graphic and text overlays, enabling producers to set up the viewing experience "just like a news or interview show would," he noted. "The graphics elements are all fed through the XDN, and we're doing the composition at our end."

The shared viewing event can be partitioned into different virtual rooms for various enhancements to the overall experience. There can be speaker rooms for presenters to go over their roles; breakout rooms dedicated to specific presenters and demonstrations; and party rooms where audience members can mingle with the ability to generate GIF "snapshots" aggregating screens showing people interacting at a given moment.

Addison's platform also provides an option to stream multiple camera feeds, which allows remotely connected users to select viewing angles from different vantage points. "It's like you can swivel the camera around yourself," Clay said. "I can choose which seat I want to be in, see who else is in the audience, or look down on everything from above."

One of the linchpins to the video-chat capabilities of watch parties in general is the real-time streaming protocol WebRTC, which is also used by many video conferencing apps. Most app providers, however, are unable to scale WebRTC, which helps explain why they have set such low limits on participation.

Red5 Pro has overcome the scaling issue with a multidirectional cloud architecture that utilizes a server software stack hierarchically deployed and orchestrated in three-tiered clusters across one or more public or private clouds. Each cluster consists of one or more core origin nodes where encoded content is ingested and streamed to relay nodes, each of which serves an array of edge nodes that deliver live unicast streams to their assigned service areas.

Set-up configurations and ongoing orchestration of all the nodes across an XDN are performed by the platform’s stream manager. The stream manager works in real time as it processes live stream information, applying automated scaling mechanisms to add or remove server nodes in response to fluctuations in traffic demand or the need to add new broadcasters and end users.

WebRTC is ideal for use on fixed network connections, because client-side support for interactions with the protocol have been implemented in all the major browsers, including Chrome, Edge, Firefox, Safari, and Opera, eliminating the need for plug-ins or purpose-built hardware. The XDN platform also supports streaming to and from mobile devices via the Real-Time Streaming Protocol (RTSP), which, like WebRTC, relies on the Real-time Transport Protocol (RTP) used in IP voice communications. RTSP exploits support built into the client-server architecture employed in mobile communications, thus eliminating the need for browser support.

Along with ingesting any content delivered via WebRTC or RTSP, Red5 Pro’s XDN technology can ingest and/or egress video formatted to all the other leading protocols used with video playout, including Real-Time Messaging Protocol (RTMP), Secure Reliable Transport (SRT), MPEG Transport Protocol, and HTTP Live Streaming (HLS). These are packaged for streaming on the RTP foundation with preservation of the original encapsulations for egress to clients that can't be reached via WebRTC or RTSP.

XDNs also preserves the benefits of adaptive bitrate (ABR) streaming without incurring the multi-second latencies of HTTP-based CDNs. The XDN origin nodes, having ingested those ABR ladder profiles, stream them over the RTP-based transport system in push mode to edge nodes. From there the content is streamed in profiles matched by node intelligence to each session in accord with client device characteristics and access bandwidth availability.

For more information about XDN technology and its versatility across an abundance of real-time interactive video use cases, see this white paper. And be sure to contact us at info@red5pro.com or schedule a call.