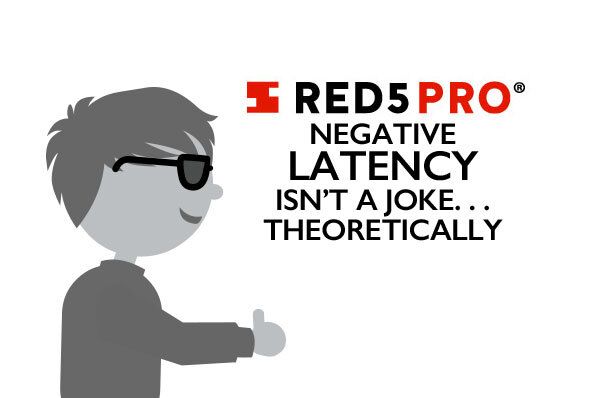 So it turns out that negative latency isn't quite a thing. We're still ironing out a few of the details and dealing with minor roadblocks caused by the laws of physics. Bending the laws of time and physics? I think we're going to need a bigger whiteboard.

For those that missed it, we posted an April Fool's Day joke with the false claim that we had filed a patent for the creation of negative latency through the use of quantum mechanics. We hope it gave you a chuckle and if nothing else served as a reminder to always check the publish date.

Joking aside, there were elements of truth to the post. In fact, we managed to fool a few people into thinking that we really were building a “quantum delivery network” for negative latency live streaming. Our mixing of facetious, factual, and theoretical research even spurned some calls that we were generating fake news. We prefer to think of it as fostering a crucial skill to slugging through slick marketing efforts — critical thinking.

The concept of quantum mechanics — specifically the phenomenon of quantum entanglement — drove our theoretical thinking behind creating negative latency.

While doing some research for NASA, Red5 Pro CEO and cofounder Chris Allen and Lead Architect Davide Lucchi outlined pathways for using quantum entanglement to send data packets at 10,000 times the speed of light. Reading the values, however, is limited by the speed of light as the data cannot be read until it is seen. Once a way to read the values faster is developed, sending messages before they arrive could be a theoretical possibility; once, that is — to borrow a phrase from Doctor Who — you can figure out the wibbely-wobbly, timey-wimey bits.

To summarize how the theoretical process could theoretically be set up (in theory): Live video images would be split into synchronized pairs of photons, also known as entangled particles. Regardless of distance between the photons each pair of entangled particles have corresponding polarizations and are in the exact same position. Thus, by tracking the positional change between the two photons, You could assign them binary values which are then translated into binary code using quantum computing.

The problem remains that you still need to read the data using the speed of light.

Also, there is the nontrivial issue that once the state of the photon is observed the entanglement is broken. Hypothetically, exchanging encrypted hashes similar to the way TLS works could maintain the entanglement by preventing the particles from being observed.

Furthermore, there is another issue stemming from the fact that knowing the position of a photon does not mean you can force the position. In other words, if a photon were negative, you can assume the entangled photon is also negative; however, if you assign one particle a positive status, the entanglement will be forcibly broken and they will no longer correspond.

Like we said, still hammering out some of the issues.

To shift over to the real world for a bit, there are hints at future possibilities. A rugby stadium in New Zealand uses Red5 Pro to transmit audio with a latency of just 32 milliseconds — so fast that fans could hear the audio streamed through their device before the sound reached them out in the bleachers in real time. In other words, we can stream audio faster than the speed of sound. Obviously, that still leaves quite a ways to get up to the speed of light.

There are real-word deployments of quantum applications as well. China has established a quantum network spanning thousands of kilometers. Similar efforts are underway in the United States as well through companies like Quantum Xchange. Since other very smart people are also working on applying quantum mechanics to computer science, there's an argument to be made that negative latency may become a future reality.

All in all, we appreciate those that indulged us and hope that this exercise in advanced physics didn't cause too much of a headache. Maybe it's just because Red5 was named after Luke Skywalker's call sign, but we're always looking into the deep future and thinking of how technology can be shaped to meet our needs. While we're certainly happy with our current achievement of sub 500 milliseconds of real time latency, there's always room for improvement.

If you'd like to help shape the future of live streaming, contact us at info@red5pro.com or schedule a call. We'd love to show you what's possible.