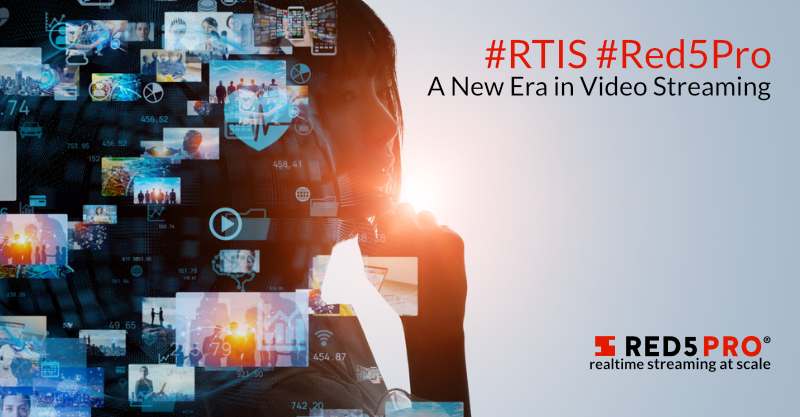 If there was ever any doubt the time would come when real-time interactive streaming (RTIS) would become a pervasive component of how we use live video in cyberspace, it’s time to let it go. Indeed, a flood tide of recent developments makes it eminently clear we’ve entered that era. We’ve put together a white paper exploring the current state of RTIS, including a deep look at 14 key players in the WebRTC streaming field. In this blog, we’ll cover the highlights, as well as recent developments.

And yet we still see a strain of denial among entities who would benefit from being part of the RTIS supply chain. Maybe this isn’t surprising in a time when facts are often viewed as opinions, and opinions, no matter how bizarre, are treated as facts. But, still, there comes the point when it’s better to jump on board than get run over by something that looks, sounds, and smells like a runaway train, even if you think it might be a mirage.

Let’s delve into some evidence that should help set the record straight for open-minded skeptics, starting with naming key suppliers who equate to 14 big reasons for recognizing the RTIS era has arrived. As our white paper offering a deeper look at these companies attests, there are many variations in capabilities, markets served, and modes of operation. However, they all share a reliance on the advances in WebRTC technology that have made this protocol the dominant browser-supported foundation for RTIS infrastructures.

In most cases, these platforms can connect any number of people on video streams traveling at sub-500ms latencies in any direction over global distances. And some, like Red5 Pro’s Experience Delivery Network (XDN), can cut latency even further into the sub-50ms range.

The companies profiled in our white paper as viable providers of WebRTC-based RTIS platforms include:

In addition, with this blog, we want to bring to light a new player, Cloudflare, which is just entering the RTIS space.

We believe the RTIS white paper offers the most comprehensive, up-to-date assessment of this marketplace currently available. While the sum of all this activity casts a positive light on the overall RTIS trendline, the white paper doesn’t pull any punches in sizing up the pros and cons of what’s on offer at this time.

Indeed, we’ll be the first to say there’s a long way to go to reach the pervasive availability, interoperability, and functionality essential to supporting the next phase of life in cyberspace, commonly labeled the Metaverse. But, clearly, we’re well off the launchpad.

A Real-Time Interactive Streaming Platform for the Telecom Industry

One notable testament to how fast things have changed is that earlier this year, Swedish telecom technology giant Ericsson spent $6.2 billion to acquire Vonage, a communications-platform-as-a-service (CPaaS) supplier. The deal included TokBox, the RTIS company Vonage acquired in 2021. This development, representing the biggest acquisition investment ever made by Ericsson, has significance beyond the fact that the world’s second-largest telecom vendor is now a supplier of RTIS infrastructure.

That’s because the purchase was driven by Ericsson’s desire to facilitate the efforts of communications service providers (CSPs) to create value-added services that will justify their investments in 5G and fiber infrastructure. The hope is that 5G will be the telcos’ ticket to escaping the dumb-pipe business cloud-based IP app providers sidelined them into. To get there, they need to provide their developers “a global open network innovation platform,” as Ericsson CEO Börje Ekholm recently shared.

Having a global RTIS infrastructure to work with assures CSPs and their developer partners an instant onramp to exploiting all the service opportunities revolving around real-time streaming. These include not only the enhanced communication services Vonage has long been known for but also the enhanced video use cases enabled by TokBox as Ericsson’s customers look for opportunities wherever real-time video comes into play.

“Our shared intent with Vonage is to develop a platform that allows developers to access network capabilities, which literally puts the power of the wireless networks at their fingertips,” Ekholm said. This starts, he said, with embedding Ericsson’s advanced network capabilities into Vonage’s video and communications APIs for quick adoption on existing 4G and 5G networks.

As noted by telecom consultancy STL Partners, telcos have a vast development community to tap for service innovation. In a blog post, STL Parters said Ericsson “believes it can unlock value from its network APIs and 5G advanced capabilities by combining its deep network expertise of 26,000 R&D specialists with Vonage’s 1.1 million global developer community, 780 API platform engineers and Vonage’s back-end connections across over 200 CSPs.”

In an appearance at the recent Enterprise Connect conference in Orlando, as reported by the telecom publication No Jitter, Vonage CEO Rory Read made clear these ambitions extend to equipping the telecom industry to deliver Metaverse-caliber services. Noting that with mobile network support, the APIs will move “with you or your avatar,” Read said Ericsson has “the ability to invest, to accelerate our opportunity to capture this future.”

The telecom industry is spending more on infrastructure than ever, with CapEx topping $325 billion in 2021, extending to heavy spending on service deployments, cloud collaborations, and fiber access as well as 5G, according to ResearchandMarkets. As a result, CSPs’ impact on the use of RTIS could be huge, especially as they extend network intelligence ever deeper into their networks.

Indeed, many carriers are building out their own CDNs, which will allow them to play a bigger role in IP transport not only for their own services but for the streaming market at large. For Ericsson’s customers, CDN tie-ins with the global Vonage Video App infrastructure will be a no-brainer.

Another significant, though not as dramatic, move toward fostering broader development of RTIS apps was taken by Dolby last year with its acquisition of RTIS platform supplier Millicast. After spending a relatively modest $38.8 million, Dolby incorporated Millicast into its Dolby.io unit, which offers developers APIs to a wide range of tools for building solutions for audio mastering, transcoding, and live streaming, among others. Millicast provides a readily available real-time outlet for commercial implementations of Dolby.io customers’ creations.

One of the newest developments adding momentum to the RTIS transformation is the beta release of Cloudflare Stream by Cloudflare, the provider of an unconventionally structured amalgam of cloud CDN, private WAN, and cloud compute services. Cloudflare Stream is an RTIS option running on Cloudflare’s global cloud compute infrastructure, which links data centers serving as edge ingest and distribution facilities in 275 cities.

Founded in 2010 with headquarters in San Francisco, the publicly traded company reported 2021 revenues totaling $656 million, representing a 52% gain over 2020. Its success rests on the appeal of the low-cost scalability it offers with highly secure services that utilize the Google-developed V8 JavaScript engine rather than the Kubernetes-orchestrated container virtualization used by virtually every other cloud compute system.

Cloudflare Stream is one of many tightly integrated options developers can employ with applications running on the company’s Workers cloud compute platform. In other words, this is an RTIS solution that can only be employed by entities who buy into the unique Cloudflare architecture. But, given the company’s success, that translates to many potential users.

Adding to the uniqueness of this RTIS offering is Cloudflare Stream’s approach to orchestrating stream flows, which relies on two draft IETF signaling protocols, WebRTC-HTTP Ingestion Protocol (WHIP) and WebRTC-HTTP Egress Protocol (WHEP). These protocols are meant to create standardized approaches to mass scaling of WebRTC.

On the origination side, WHIP defines how to convey the Session Signaling Protocol (SDP) messaging that describes and sets up sessions allowing content streamed over WebRTC from individual devices to be ingested across a topology of media servers acting as relays to client receivers. On the distribution end, WHET defines the SDP messaging that sets up the media server connections with recipient clients.

We will dedicate a forthcoming blog to a full description of Cloudflare Stream and the roles of these protocols as alternatives to how other RTIS infrastructures, including Red5 Pro’s XDN platform, operate. But here we are compelled to note that, while the WHIP/WHEP innovations offer important benefits that the RTIS sector is sure to exploit once the drafts are finalized, Cloudflare is taking risks getting ahead of that process. This is especially true with WHEP, which is still in a fairly unsettled state.

It's also important to note that Cloudflare is using misleading promotional messaging touting its approach as a labor-saving, more flexible alternative to SDK-based instantiations of WebRTC-based RTIS. How much manual labor, if any, is eliminated through these protocols with Cloudflare Stream depends on the types of SDK you’re comparing them to.

Certainly, SDKs based on proprietary technology make it hard for developers to expand the reach of their applications to new device categories that aren’t covered by a given SDK. But when SDKs are based on open standards, as in the case of Red5 Pro’s XDN architecture, such expansions are easy to implement.

Moreover, setting up a WebRTC-based RTIS footprint with WHIP entails manually preparing Node Package Manager (NPM) libraries that associate all the JavaScript-based resources, including media servers, that are to be used with a given implementation of Cloudflare Stream. Technically, this is tantamount to using an SDK to instantiate an XDN infrastructure with one major exception: in the Cloudflare case, developers are restricted to working in the JavaScript environment, which means they actually have less creative flexibility than they do working with SDKs that use standardized interfaces into multiple creative domains.

No Rationale for Reinventing the RTIS Wheel

But, again, the larger point here is that Cloudflare’s entry into RTIS is another sign of the magnitude of the transition underway. So, too, is the fact that, with things moving at warp speed in the WebRTC domain, there appears to be diminishing enthusiasm for delaying progress with initiatives aimed at finding alternative approaches to RTIS.

For example, one such endeavor, the High Efficiency Streaming Protocol (HESP) Alliance, got underway in 2020 with the goal of creating an HTTP-based sub-500ms latency streaming standard. This standard would not only be limited to one-way transmissions; it would require major revisions in HTTP stream packaging and the use of a client player in lieu of the browser support enjoyed by WebRTC.

Why this made any sense in 2020 is hard to discern, given the primary reason for the use of real-time streaming is in conjunction with the explosion of interactive video use cases that require a multi-directional solution. But with one of the HESP founders, Synamedia, openly promoting the use of WebRTC at the recent IBC trade show in Amsterdam and at least one adherent suggesting that the protocol will enable streaming with “delays not exceeding two seconds,” the rationale appears to be weaker than ever.

Meanwhile, 2022 is shaping up to be a landmark year for RTIS, thanks to the ability of WebRTC-based platform providers to satisfy the exploding demand for solutions. All the RTIS providers profiled in our white paper have their own stories to tell about the expansion of customer bases and use cases that are driving the market forward.

A Bird’s Eye View of the RTIS Transformation

Here at Red5 Pro, we are in the driver’s seat on a high-speed track where the range and pace of developments mirrors, often with significant magnification, what is happening sector-wide.

We’ve reported on some of these developments:

But we’re not stopping there. Our upcoming developments will continue to shake things up in the worlds of surveillance/security, autonomous vehicles, synchronized live event streaming, and more.

If all this sounds exciting, please download the Getting Real About Interactive Streaming white paper. And feel free to contact us for more information at info@red5pro.com or schedule a call.