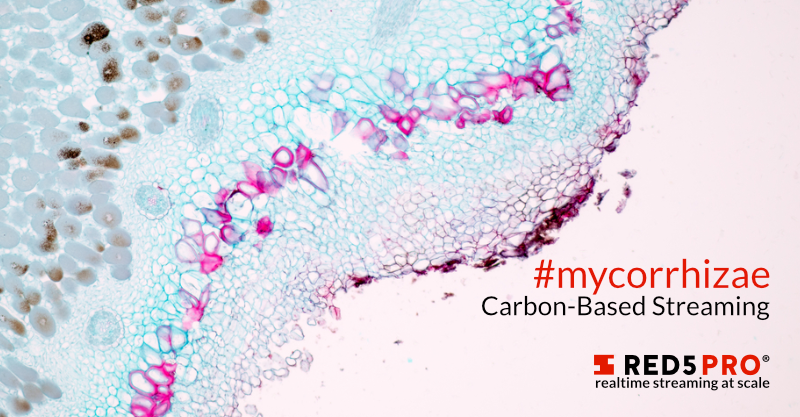 Today we are excited to finally announce what we’ve quietly been working on for the last few years. Red5 Pro has taken a major step into the bioengineering field. Pairing our passion for and expertise in ultra-low latency content delivery with the scientific principles underlying mycorrhizal networks, Red5 Pro has developed the ability to rapidly transmit carbon matter over long distances. The early promising results reflect the possibility of delivering carbon matter of any sort, but we are particularly interested in the transmission of food without delay to anywhere in the world. The technology has potential implications for the global challenge of food scarcity, including the ability to send necessary food sources to remote locations that are impacted by famine and natural disasters. Red5 Pro’s carbon streaming will completely revolutionize food distribution as we know it.

To achieve this breakthrough, we took our cues from nature. Underneath the forest floor, interwoven with the roots of the trees, is a thriving network of mycorrhizae fungi. While mushrooms are the fruit of this fungi, the majority of the fungal organisms are made up of hyphae, microscopic strands that come together to form a tangled web called the mycelium. The mycelium extends out, connecting with other mycorrhizae in the surrounding area to form the mycorrhizal network. The mycorrhizal network transports water and nutrients to plants throughout the forest, allowing plants in unfavorable conditions, for example with low light exposure, to receive all the benefits of the plants located in better growing conditions.

Leaders at Red5 Pro have long been fascinated by the operation and efficiency of this biological network but a 2017 study showing that mycorrhizal networks transfer not only sugars, but also lipids, changed everything.

It was that moment, according to CEO Chris Allen, that set the wheels in motion. “It was like a giant lightbulb went off. We’re already providing a tool for streaming massive amounts of video data with virtually no lag. What if we could do the same with physical matter?”

Red5 Pro brought on Dr. Yksi Duben, a renowned expert in mycorrhizal networks, as Lead Bioengineering Architect to lead the new initiative. Over the past few years, the team has been working hard to translate the lofty notion into reality. Now, they have successfully created the first synthetic mycorrhizal network.

The team used stem cells from an ectomycorrhizal conifer, commonly known as the Douglas Fir, to grow tiny receptors to plug into the mycorrhizal network. To create the network, we used spores of arbuscular mycorrhiza and allowed them to grow into a PET expandable braided sleeving which was wrapped around another plastic tube. This essentially became our ethernet cable for the network. Note our recently filed patent on the system and method for transferring carbon over arbuscular mycorrhiza networks for more details.

To allow the flow of carbon we needed to generate the symbiotic relationship that occurs between the fungal symbiont (our tubing/ethernet), or mycobiont, and the receptor (roots) on the tree cells. Thus we created our own fungal hyphal connections allowing carbon and other nutrients to flow in real time from one receptor to the other.

Once we had completed a full end-to-end network, we needed to provide source cells to allow for the network to transfer the “data” from one receptor to the other. As patents are currently being filed on this portion of our technology, we won’t provide more details on how we accomplish it. Our diagram below simply refers to it as “Source”.

This Proof of Concept (POC) network running at our lab in Boston allows for simple transfer of carbon data which will eventually become a Low Latency Food Regenerator powered by Mycorrhizal Networks. Most recently the team was able to transmit the cells of an apple from one side of the lab to the other.

“We are a long way from transferring actual food, but the fact that we managed to transmit and reconstitute the cells of an apple using our network shows great promise,” reports Dr. Duben.

At the source, a food item, such as an apple, is broken down into its main chemical constituents, for example carbon, water, nitrogen, etc., using a Food Decomposer. The Food Decomposer interfaces with a mycorrhizal network that transports the chemicals to their destination where the item is regenerated by a Food Recomposer, delicious and ready to eat.

The architecture might look simple, but the team had several hurdles to overcome. Ensuring that the end result is safe and FDA compliant was key, as well as maintaining communication between the Decomposer and Recomposer to maintain full quality control. A combination of heat, electricity and chemical agents provide the foundation for the Food Decomposer and Food Recomposer, both of which undergo an intense calibration and testing process.

Delivering the chemicals over mycorrhizal networks was no easy feat. While transporting the chemicals is simple enough, the challenge lies in ensuring they arrive at the intended destination. This resulted in the development of the Fungi Border Gateway Protocol (f-BGP), an extension of BGP, engineered for fungi-based networks to efficiently route chemicals to the intended destination. The protocol works across Fungi Autonomous Systems (f-AS), or independent mycorrhizal networks, created by different fungus families, each having its own trade-offs.

Dr. Duben is extremely proud of the technology and the work of his team. He sees it as a clear step forward from existing delivery applications in terms of greater performance and lower costs while also being carbon neutral. Not only that, but its infinite scalability opens the doors for a wide range of use cases from manufacturing to medicine.

Want to see how Red5 Carbon-Based Streaming can transform your business? Contact us at info@red5pro.com or schedule a call.