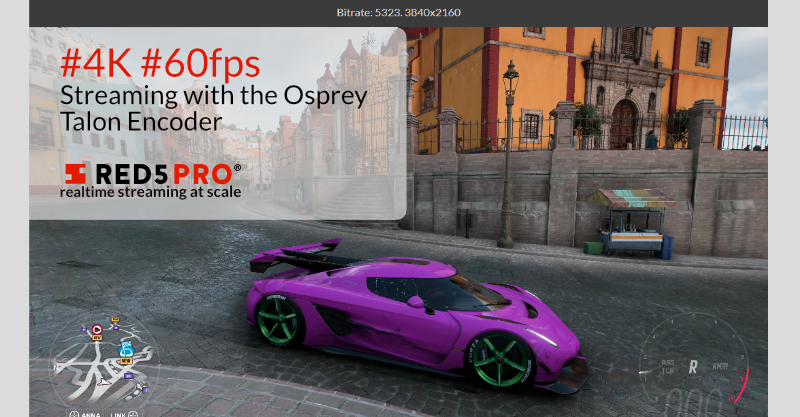 It is widely accepted that 4K resolution is the current standard in the broadcast media industry. But real-time interactive streaming (RTIS) video at 60 frames per second(fps) in 4K resolution is certainly on the bleeding edge. As with all bleeding edges, this one was fraught with issues to be resolved. We’re happy to say that those issues are in the rearview mirror as Red5 Pro delivers the gold standard in 4K using the Osprey Talon encoder.

If 4K is the standard in broadcast, you might be wondering why it’s so challenging to stream.  Just as the broadcast industry had to go through major upgrades to support 4K, the streaming industry does as well.  Red5 Pro also has the need for interactive real-time latencies, adding further computational complications.

In order to get that amazing 4K picture, you need to deliver four times as many bits to the screen as with 1080p. And then you have to double that rate once more to stream at 60 frames per second. There are newer codecs to help with this, but, until more devices support AV1 hardware acceleration or the industry fully supports H.265 for WebRTC, we are stuck streaming with older protocols like H.264.

The first problem when heading into this realm is how to generate a 4K stream to send to your ingest. Enter the Osprey Talon encoder. It features the AMD Xilinx Ultrascale+ Architecture at its core, giving the unit the ability to stream 4K at 60fps.

About the Osprey Talon Encoder

The Talon encoder comes in two form factors, one including 12G-SDI in/out and HDMI and another with a single 12G-SDI in. Both feature the same chipset. Via this chip, Osprey was able to attain its goal of achieving the lowest latency while not sacrificing quality. This allows the Talon to encode up to 4K 60fps in 10-bit HDR (4:2:2) video.

Output transports include RTMP(S), MPEG-TS uni and multicast over UDP, RTP, Zixi, SRT, and WHIP. For recording purposes, the Talon can also save to an MP4 while delivering a stream. The Osprey unit supports AAC and OPUS audio in both 44.1 and 48KHz sample rates. Embedded 708 captions are supported, as well as the ability to send KLV metadata. The units themselves are essentially heat sinks, allowing the Talon to operate without a fan and the accompanying noise.

In addition to supporting H.264, the Osprey units also support H.265. Unfortunately, H.265 is not going to be a viable codec for use with WebRTC, so we will continue to focus on H.264 until more client device hardware supports AV1.

The Talon user interface exposes advanced codec settings, such as the min and max QP settings, so that the stream can be optimized based on the content. With the enterprise feature set, the encoder allows customized consent banners, HTTPS administration security, an OpenVPN client, and a firewall to block access to the management IP.

To test the Talon, we needed a high-quality 4K 60fps stream. To add to the fun, we decided to create a streamed game experience using Forza Horizon 5 from an Xbox Series X as our source.

The Talon sent the Xbox’s 4K 60fps stream to a geographically close datacenter running a Red5 Pro cluster. Because there is no channel for controlling the game via the stream at this juncture, the controller was not streamed and was connected locally to the Xbox.

With the equipment configured as shown in the diagram, the stream quality was optimized to allow for driving. The Xbox was connected via HDMI to the Talon encoder. This encoded the 4K stream into H.264 and sent it to the Red5 Pro cluster using SRT. The stream passed from Origin node to Edge node in the cluster and then made its way back to the PC where the game stream was displayed to the player.

For those familiar with Forza Horizon 5, we drove a hot pink Koenigsegg Jesko (yes, the rims are fluorescent green) from the Volcano to the Cathedral in Guanajuato. The test experience allowed the car to be driven at ludicrous speed down the winding roads of the volcano, through the desert, and onto the narrow streets of the city.

Mark Pace, Red5 Pro CTO adds, "The Osprey Talon encoder, when used with Red5 Pro, expertly streams 4K 60fps at incredible low latency. The encoder is full-featured and easy to configure, while also exposing advanced settings with detailed control when needed. We’re excited to support it and the future products in that line."

If we've piqued your interest in real-time 4K 60fps interactive streaming, let us know! Feel free to reach out to us at info@red5pro.com or schedule a call.