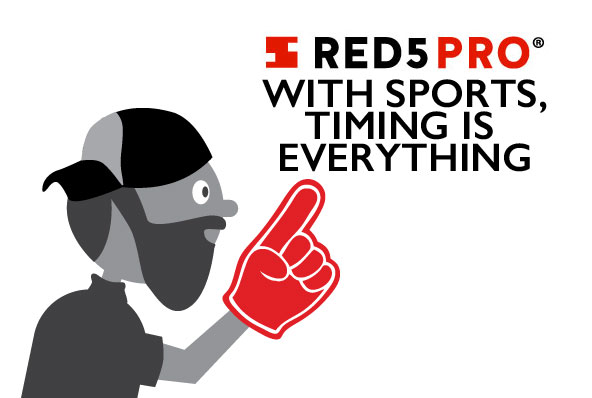 Sports; love 'em or hate 'em, lots of people love them and the live-streaming industry has noticed. A growing list of subscription services allow fans the opportunity to catch the game when they're away from a tv, or out of town. Even traditional VOD networks like Amazon Prime have joined the game outbidding, Facebook and YouTube for Twitter's NFL Thursday Night Football slot. This all may sound exciting and innovative, but what is it actually adding to the UX?

My grandfather used to watch baseball on his tv, but he didn't like the cable commentators. So he muted the volume and turned on the radio. Of course, that didn't entirely stop him from throwing a rubber brick at the tv when the umpire inevitably made a "bad call", but it solved the problem. Except for one small thing: latency. The radio was a full two seconds ahead of the tv, so everything you saw had already happened. Two seconds may not sound like a long time, but when comes to 90 mile an hour pitches, half the play could be over by then.

Fast forward to today (and replace radio with social media, or text messages) and you have the same problem. The live video, in fact, isn't live. When dealing with a high latency app (or those claiming low-latency), there's an unfortunate possibility for spoilers. This dampens one of the greatest merits of sports: their ability to bring people together. Whether complete strangers at a bar or close friends at home, sports provide common ground. Until someone makes an app with practically real-time latency using, say, the extremely low latency capability of Red5 Pro, then everything else is just an extension of the same old thing. You may be watching your team, but you can't be part of one.

Now while I won't be muting the tv and throwing rubber bricks at the screen, I'm still going to watch the game essentially the same way as my grandfather. The screen may be bigger or more portable, but it's the same feeling; excited, but wanting more.