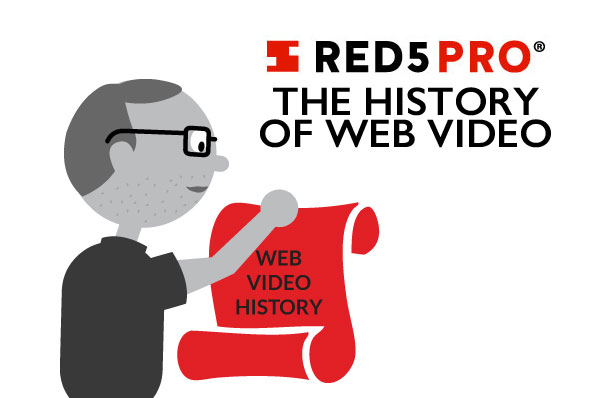 In the beginning, there was a mighty king who forged an empire of unimaginable splendor and wealth. The name of this all powerful king? He was known as ... YouTube. In the year 2012 AD, YouTube set out on a journey to blaze a righteous path to live-streaming prosperity. Eventually, he would team up with other great Titans; Facebook, Twitter, and Amazon. They would go on to create a video live-streaming commonwealth spanning across the entirety of the internet for eons to come.

That, however, is not the full story.


First Age - Small Beginnings
The First Age of the Live-Streaming Saga, originates far away in the age of the 90's, where people would huddle around the glow of their 640 X 480 CRT monitor downloading videos no bigger than a measly postage stamp. Simple, third-party players like Real Player and WinAmp, were the only source to view these arcane videos. The rudimentary method of dial-up internet access could produce only a limited bandwidth. This made the concept of live-streaming video all but impossible.


Second Age - Flash the Pioneer
In time, civilization progressed into the Second Age. The early 2000s saw the emergence of a new technology known as Flash. Pioneered by Macromedia/Adobe, this method served as the foundation of true video streaming. At first, its capabilities were limited, allowing only progressive download, and playback in the browsers using Flash Player. However, the establishment of Flash Communication Server and RTMP ushered in a new era of video streaming, and the practice was able to spread. In 2005 a young YouTube took notice and began to capitalize on this new ability, but he was not to be the only contender in the live-stream arena. It was at this time that an intrepid group of developers reverse engineered RTMP and created an open source alternative to Flash Communication Server called Red5. That group would eventually move on to form Red5 Pro, where they continued the quest to spread low-latency, live-streaming across all lands, far and wide.


Third Age - Live-Streaming Takes Root
Gradually, new technologies emerged to push the capability of live-streaming into the Third Age (circa 2012 - current). This era saw the application of HTML standards around video, the release of HLS from Apple, MPEG-DASH and the dominance of HTTP based protocols. These occurrences signaled the beginning of the end for the once dominate Flash Player, as modern mechanisms replaced outdated systems. However, this period was marred by high latency values. A video broadcast from one source would take anywhere from 20 to 40 seconds until it could be received by the subscribing source. Other communication methods such as text-messages could travel faster and reach a viewer in near real-time, thus limiting the practicality of connecting to live events such as sporting contests. This weakness could be purposely exploited by a practice commonly referred to as "trolling", in which one viewer watching an event in real-time, sends information of major occurrences (such as the scoring of a goal) to another viewer watching from a video live-stream thus dulling the receiving viewer's excitement. Despite this limitation, the simultaneous expansion of internet access and smartphone use, allowed the practice of live-streaming to spread across large expanses of the Earth.


Fourth Age - The Rise of Low-Latency
This brings us up to the current day, where we are entering into the Fourth Age. Though it has yet to be written, the Fourth Age will be a time of widespread, nearly instantaneous, streaming. Currently, the majority of broadcast Internet videos are hampered by high latency, which can cause usability problems due to the way people use mobile devices. The release of programs such as YouTube Live, Periscope, and Facebook Live may serve as harbingers of the coming age. Low latency standards, such as those of WebRTC, are enabling software (like (Red5 Pro)[http://red5pro.com]) to provide streams with a latency of under one second. These quasi-real-time speeds will allow video streams to send nearly instantaneous videos to millions of concurrent viewers. An aging YouTube may still sit on the throne of internet video, but a live-streaming revolution is assembling to challenge that authority.