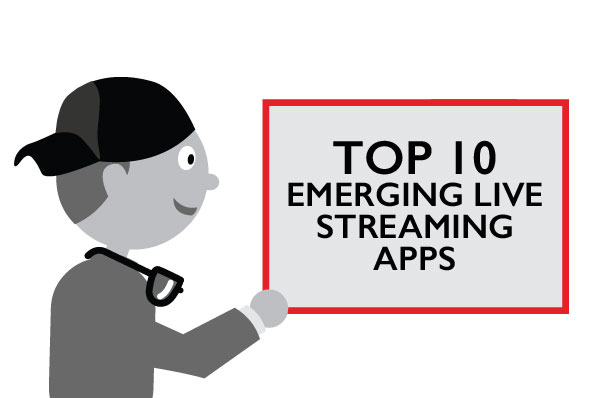 As Twitter and Facebook duke it out for live streaming dominance with their apps, there are other, more niche players that are showing tremendous promise. We took a look at what’s out today, and which ones have the potential to make it big. The trend we are seeing is that niche markets and highly specific applications are the ways that these new apps are distinguishing themselves.

Within this trend, we have noticed two key differentiators: 1. streaming apps targeting actual "needs" or consumer pain points, such as providing easy live access to international soccer matches, and 2. entrepreneurs focusing on the "democratization" of live content by connecting previously isolated communities that share common interests such as sports, music, journalism, etc. You name the interest... it's most likely being democratized via live streaming!

Blab - Let’s Anyone Have Their Own Show

Blab is a hybrid peer-to-peer and conferencing live video chat application that allows users to create a virtual room and participate in activities such as watching video, listening to music or simply chatting with other participants. We like Blab for its ease of use and the unique ability to allow other user to join a conversation upon request.
*As a side note, Sean Parker's live streaming platform, AirTime, which serves as a very similar service, just relaunched after a long hiatus.

Edcast is a one-to-many application which powers knowledge sharing via live-streamed educational content for business teams and communities, helping to reduce the friction of team learning while keeping users engaged via bite-sized content and interaction with subject matter experts.

Twitter has become one of the best sources of aggregated breaking news from around the world. Newzulu has taken consumer journalism a step further by creating a community of citizen journalists who can share and break stories to the world in real time via photos, videos and articles that can then be disseminated across a huge number of media partners from around the world.

Vu - Transport Yourself to any Location

Who doesn't want to indulge in a vivid daydream of being teleported to a tropical "Maldive beach" on a rainy day at the office? The creators of Vu want you to experience just this by allowing you to see all corners of the globe, live, through the point of view of other users who you can request to connect with.

There is unprecedented demand for people with coding skills and many edtech companies have sought to provide expedited courses for those who want to learn. LiveCoding has iterated on this trend by creating a p2p platform that allows viewers to watch people live code products in real time.

Wisper is a great new app which allows users to share texts, photo, videos and audio clips. Wisper's motto-"The best things in life don’t last forever" is what makes the app unique; the sent message disappears from the sender's phone 25 seconds after it has been delivered and from the receiver's phone 25 seconds after it has been opened. As users of apps like Snapchat know, the fleeting nature of shared content creates a sense of urgency and makes an app like Wisper appealing. In addition, Wisper just added high quality, p2p live streaming to the interface as an additional feature.

Fubo is helping to democratize access to professional soccer matches around the world via its SaaS live streaming service. Soccer is far and away the most popular sport around the world, and Fubo is tackling a serious pain point by providing access to an enormous number of international leagues which otherwise would be quite difficult to find and consume in real time.

Invaluable epitomizes this trend of solving a long apparent pain point; in this case, the pain point is access to world-class auctions. Though not fully mobile yet, invaluable's web platform allows bidders to access top auctions from around the world and bid in real-time while watching a live stream of the event.

Everyone dreams of being a great cook, yet rarely do people put in the time necessary to make this a reality. Nom is looking to attack this problem head-on, and they have created an interactive video platform that allows viewers to learn from their favorite chefs, bloggers and foodie aficionados by interacting directly with them as they stream live.

Everyone knows group fitness classes are HOT right now. From Soul Cycle to Class Pass, entrepreneurs are jumping into the fitness space to take advantage of the seemingly endless demand for subscription-based exercise plans. Flex is taking this to the next level by providing access to a variety of interactive, live-streamed group fitness classes.

India's answer to Meerkat, Periscope and the other big players in the American one-to-many live streaming ecosystem. With just one click of the app, users can broadcast live events to social media via a YouTube account. Instalively's secret sauce? The company has focused on providing high quality streams on low bandwidth networks, helping to democratize live streaming to a broader audience.

Petcube - Live Stream With Your Pet

We figured we'd add one more to this list, for while it doesn't follow the trend of being "necessary" per se, it is certainly niche and democratizes live streaming for pets....Petcube keeps people connected with their pets by enabling them to watch, talk, and play laser games with their pets through the Petcube mobile app. Who wouldn't want to interact with their pet 24/7???

Did we miss anything? We'd love to hear from you if you have any additional live steaming apps that you believe will be the next big thing!