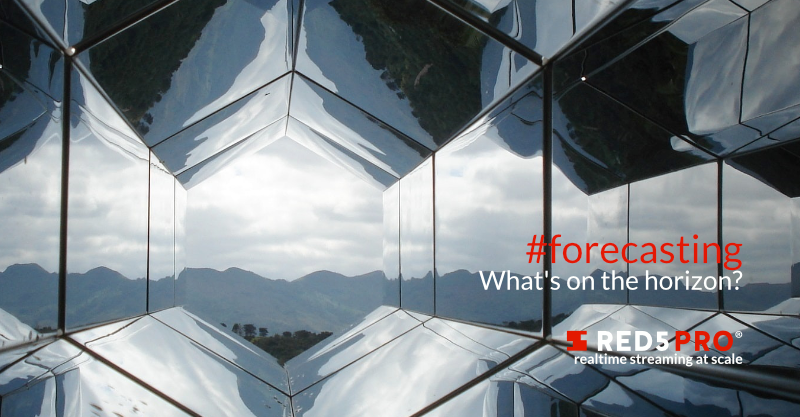 For tech companies to thrive in today’s fast-moving arena, it takes an awareness of the past, a firm grounding in the present, and an eye on the horizon. We brought together two of Red5 Pro’s visionaries, CEO Chris Allen and CTO Mark Pace, to chat about where things are and where they are headed.

What hat(s) do you wear with Red5?

Chris Allen: I'm the CEO and co-founder. What don't I do? I'm primarily focused on the overall direction and vision of the company. Right now that includes closing deals and working on investment. I get my hands on a lot of different things, but luckily Pace has joined the team and he's taken a lot of the overall technical responsibilities away from me so I can focus on those key areas.

Mark Pace: CTO. I am here to fill in the gaps on the tech side, set up processes, etc. I'm also here to allow Chris to pull back so that he's got more time to work on investments. I also ensure that our tech stack and our tech team function properly.

What kinds of tech excite you? What inspires you? What do you love working with, hearing about?

Allen: I like things that aren't obvious. Whenever something seems totally insane but somebody credible is saying it's a good idea, I think, "Oh, that's kind of interesting, we probably should look at it."

The truly groundbreaking technology is usually the thing that seems worthless, or like it only does one thing well. People dismiss it right away. I think those are usually the gems.

This Web3 blockchain stuff is a good example. Plenty of people dismiss it - it does a terrible job at just about everything, except for creating a trustless environment. The fact that we have this system that isn't controlled by any one entity is fascinating. That’s the key point that I think people miss out on - there's no single person or corporation or anything controlling it. That by itself is a paradigm shift.

Quantum computing is something else that's coming up that is also quite interesting. Any time we can speed up processing, that's going to be a possible game changer.

Pace: I completely agree with Chris on the blockchain stuff. It is one of the most overly hyped pieces of tech in the last two decades, but it's got some specific problems that it solves in a very unique way.

As far as tech stacks that interest me, I've been on a lifelong journey towards VR, both from a personality standpoint as well as in terms of actual technology. It's finally happening, and I may finally reach my lifelong dream to just exit the planet. Enough of these humans, off to see something different!

In truth, VR has also been overhyped as the be-all-end-all to everything. Again, it's got very specific things that it does amazingly well and we're just starting to see those change the way we work. Industries like manufacturing are very interested in VR because it gives the ability to have a “digital twin,” to train on something that you haven't been able to see in real life. You can see and experience those things in VR, so there are huge applications for businesses, as well as a lot of applications for pleasure seekers like myself.

How do we transition from overhyped possibilities to ground-breaking real-world applications?

Allen: People try to slap existing ideas on top of new technologies, but the real potential is often something that hasn’t even been considered yet.

Think about the first iterations of the internet. It was just like, "Okay, we're going to put magazines online and everybody's going to be blown away," but no one envisioned what we have today. Because the medium was similar to print, everyone assumed that's how it should work.

Pace: Yeah, and it took a while before the potential of the technology sunk in enough that we stopped treating it like print.

Allen: That's right. We suffer from that in video, too, particularly with live streams. We've had television around for a very long time and that's how most people treat streaming, as if that's just the way video is meant to be. We put it on the internet and we call it OTT and now it's like a box and we're done. It's ripe for innovation. We’re finally starting to see interactive experiences which make it far more interesting than what you could do with a passive television experience.

Pace: All the opportunities that required in-studio live audiences are now extended around the globe. This hasn’t been heavily utilized yet, but I think we'll start to see more remote people brought into live broadcasts. And what you currently see on the news is going to be more prevalent in other kinds of content too. People can be brought in virtually with XR to events, etc.

Allen: In terms of live video, people are starting to take the different pieces and put them together in unusual ways. Sometimes that becomes really compelling.

We've always had gambling, for example, and going to a casino. It's been around for a very long time but now people are applying it to a live sports broadcast. What’s the next play? You get your bets in and then, boom, you can see if you won. And that becomes this weird interactive experience with a live broadcast.

Then, because we’re doing all of this virtually, you can bring your friends in so it becomes a watch party with a live sports betting element. It’s as if we're all hanging around a craps table but instead it's the sports game that's happening in your VR headset. It's a 360-degree view and you see your buddies and the game is all around you.

All of this is starting to happen. And that's just using sports as one example. We're also seeing it with virtual dance clubs and people hanging out together and kind of dancing.

Pace: I think that we're going to see AR experiences growing until we don't even notice it. People already play around with Snapchat and do all sorts of AR stuff with filters, but they don't realize that's what they're doing. And shopping experiences are going to be all about AR - I'm not going to go to the store to try on that shirt before I check it out on myself using AR.

More and more of that will incrementally seep into our lives without us realizing it. There will be huge paradigm shifts in that area, especially if we can get any kind of wearable device that allows us to see AR without looking completely like a “glasshole.”

How will all the new technology empower people or bring down civilizations?

Allen: I think that's where Web3 comes in and holds promise. You aren't going to have single companies controlling everything.

The concept of a DAO [decentralized autonomous organization] is really interesting because the people own it and they make decisions by voting. It's democratic and it’s difficult to rig the system because the system is open source code that anybody can see.

Now there have been DAOs that have launched with flaws in them, but we’re just in the early days. I believe that a trustless decentralized computer that's accessible to anybody is kind of a powerful thing. I don't know what the experiences are going to be like based on that, but perhaps more like the beginning of the internet when we thought everybody could have their own voice. It was free.

Pace: Yeah, I'm excited to see if it plays out in the right way. I do think decentralized organizations are going to provide some alternatives to companies like Facebook, giant corporations that have lost focus on providing good to humanity, if they ever had that, and are instead focused on bottom line profits at the expense of everything else.

The more you can spread out voting and the less centralization of power you have, the less likely it is going to be used in a horrible way. I'm excited about it, but also cautious.

What are your thoughts on the metaverse? Where is it going?

Pace: I think it's here already in many different forms and it's going to continue to be here in many different forms. Facebook wants to be the Metaverse but I don't think there's going to be THE Metaverse. I think every company is going to have its own metaverse for different functions. There will be general-purpose metaverses where people meet up and things like Fortnite which is an accidental metaverse. They're everywhere and I think they'll continue to be that way.

What about Red5? What role do we play in technological advances?

Allen: What we're doing with our company is interesting because we get to create the tools that people use to make these new things. I'm most excited to see what people do with our products and how that drives our future roadmap.

For example, we're seeing some really innovative things in sports. I'm not even a sports fan but I like the concept of how you can engage with people in this way - like being able to virtually sit in the cockpit of a Formula 1 vehicle at an event and see that point of view.

In terms of development, we recently released our video mixer tool for combining live streams. We’re starting to see it being used for things like webinars and watch parties, so it will be exciting to see how that develops. An upcoming release will be powered by AMD’s U30 FPGA to provide hardware acceleration for the mixing and our customers can even deploy this feature on the AWS VT1 instance, allowing for the performance gain in the cloud.

Edge Computing is another compelling deployment model for Red5 in that it reduces the speed of light problem because you're getting your servers closer to the end users. What we are doing with AWS Wavelength and Videon in this space is very exciting.

There are solutions that help people, too. It's not just pure entertainment. We’re working with one customer who is streaming from ambulances - live 360-degree streaming - so that ER doctors can make an impact as the patient is arriving.

It’s inspiring to be able to provide tools that people use to build these things. I look at it as a creative endeavor. And that's what makes it fun.

To learn more about the Red5 Pro platform and how it can elevate the future of your business, contact info@red5pro.com or schedule a call.