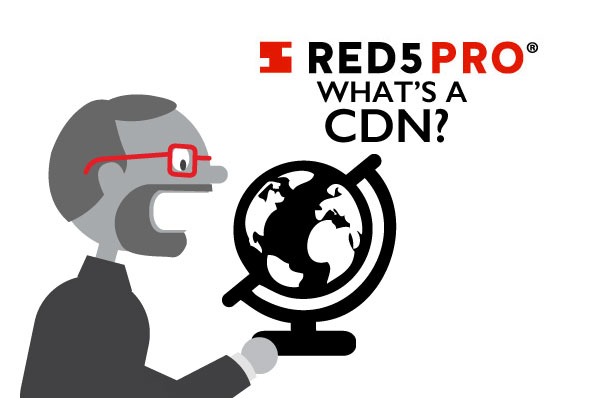 There's quite a bit of confusion out there regarding CDNs. We get many questions about adding or connecting a CDN with Red5 Pro. The truth is, you really don't have to do anything special at all.


What We Mean by CDN

Otherwise known as a content delivery network, a CDN system employs a distributed network of servers to transport data and media files across the internet.

Most CDNs today operate over an HTTP connection which caches data into different servers to facilitate packet requests. The retrieval of each packet requires the opening and closing of the connection. This redundant process and other issues in HTTP based streaming protocols (like HLS and MPEG DASH) cause latency in the system.

Red5 Pro, on the other hand, uses WebRTC, and other inherently fast protocols. This way we create an open connection which constantly sends the information packets to and from the client via our autoscaled clustering. Through these and other modern methods, we are able to achieve under 500ms of latency at tremendous scale.

Of course, we aren't the only game in town when it comes to low latency streaming.

Other third-party providers that compete in this space make it so you have to use their hosted solution (which they will typically call a "CDN"). This full package means you need to use their specific backend, and you have no control over what it does, the pricing, or other aspects of the plan that they dictate.

For example, Wowza calls their system the "Wowza CDN", but behind the curtain, it’s just their server software tacked on top of Azure. Not to mention the fact that you are then locked-in to their system.

The truth is, most CDN providers are deploying on cloud networks like AWS, Google, and Azure anyways, so why let them charge you a premium?

You are still using the same network than if you deployed it yourself but paying more for it. We believe CDNs don't have to be tied to a hosted platform as a service model, and that's why we built our autoscale solution to be portable and work in the hosting solution that works best for you.

What about the big CDNs though? Don't they have huge powerful networks that make it so my streams can be delivered efficiently?

Akamai is a giant in the CDN network, with an extensive network spread across the globe. In truth, Akamai and their network of servers, operate similarly to AWS and Google. Right now though, Akamai and every other major CDN uses HLS and MPEGDash which makes for an inherently slower connection; bad news for those looking for low latency. So the fact that they have such an amazing global reach is a moot point.

That's about to change though.

We recently partnered with Limelight, extending where Red5 Pro streaming can be deployed and allowing you more choices to deploy on a massive distributed network without sacrificing speed.

As a hosting agnostic platform, you can deploy Red5 Pro according to your specific requirements. You can use Google, AWS, Azure or other hosting platforms. All you need to do is follow our simple deployment guides. This is much more flexible and price effective.

But what about distance?

Using our clustering solution, you can set up servers in different regions to deal with users in all parts of the world. Even better, when using Google or AWS, you can build our autoscaling solution.

In addition to monitoring server traffic, it can also spin up new servers in different geographical areas. All that is done automatically so you don't even have to worry about it.

So as you can see, Red5 Pro fills the role of a CDN with no extra connections or additions necessary. It's a flexible solution that doesn't tie you down to a particular network, and works with the same low latency anywhere you deploy it.

In short, Red5 Pro is a CDN, just one that's portable.

Interested in building a CDN of your own? Want us to do it for you? Check out our site and give us a call.