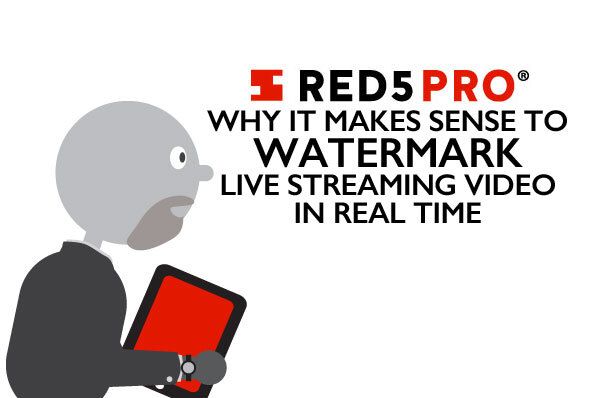 As the battle against online video piracy intensifies, license holders need better approaches to forensic watermarking that can accelerate action against theft of live content, including content streamed in real time, without creating vulnerabilities to pirates’ countermeasures.

Given how hard it is to battle theft of live content streamed at multi-second latencies using current watermarking techniques, the idea that watermarking might be used to take effective action against theft of content streamed at 200-400ms latencies might seem farfetched. But, as shall be seen, it turns out that a next generation CDN, better described as an Experience Delivery Network (XDN), that can support real-time steaming at massive scales is uniquely suited to support watermarking that avoids current drawbacks to persistent, successful disruption of pirated live video.

The fact that a better approach to watermarking can enable timely action against attacks on real-time as well as higher latency live-streamed video is becoming ever more meaningful as real-time experience with video takes hold across the online ecosystem. Pirates inevitably will be drawn to real-time streamed content tied to socialization of live sports and esports viewing, gambling applications, shared engagement in virtual reality experiences, and much else as

For now, though, the most important impact resulting from adopting this new approach to watermarking will pertain to the broader realm of live content streamed at latencies in the multi-second range. With annual losses to theft of sports and other linear programming soaring into the billions of dollars worldwide, there’s growing urgency behind the need for an easy-to-implement server-side watermarking solution that can extract and read the hidden codes identifying pirate sources much faster than can be done with current solutions.

Fortunately, producers and distributors have every reason to be confident that steps to improve results with watermarking are worth taking. After all, much progress has been made in the industry’s battle against piracy, much of it as a result of actions anchored by various iterations of today’s watermarking technology. With increasing frequency, headlines worldwide tell of law enforcement takedowns against multimillion-dollar pirate operations.

But providers also have ample evidence as to why they need a better approach that enables more ubiquitous and effective use of watermarking. Despite escalating spending on the anti-piracy battle, which researcher ABI projects will increase globally from $172 million in 2021 to $229 million by 2024, losses to live content piracy continue at an alarming rate. For example, ABI calculates losses to live streaming theft in Europe hit €941 million in 2019.

In the U.S., according to a survey conducted by the Digital Citizens Alliance, consumers in 2020 will spend over $1 billion on illicit IPTV streaming services, which provide multichannel bundles of sports, news and other live streamed programming. The survey found an estimated 9 million U.S. subscribers to pirate services obtain them from at least 3,500 U.S.-facing pirate websites, social media pages and multi-service online marketplaces.

A recent survey conducted by Ampere Analysis for Synamedia, which garnered over 6,000 responses from consumers in ten countries, revealed that while nearly 90% of respondents subscribe to legitimate pay TV or OTT services, more than half also view pirated sports content at least once a month, and 42% of that group do so daily. Only 16% of responding sports fans said they never view stolen content.

Pirates’ ability to bounce back from one-time takedowns underscores the need for more effective and pervasive use of watermarking. A vivid example of the persistency and resourcefulness of illegal actors appears in what U.K. cybersecurity solutions provider Group-IB learned about the fate of a Russian-speaking piracy conglomerate that relied on two CDNs, Moonwalk and HDGO, that were shut down in 2019. After a brief falloff in the Russian piracy market, conglomerate participants have surged back with the emergence of a second wave of CDNs that allow them to frequently change technical domains and IP pools across diverse infrastructures.

Action against pirates helps, but the primary goal is to deprive thieves of their audiences, which requires aggressive, ongoing disruptions of purloined content with sufficient frequency to convince most consumers that theft poses untenable risks of losing access to prized live events. Current server- and client-side solutions used to watermark live streams on a per-session basis fall short of what’s needed on several counts.

The challenges posed by theft of live content have outmoded server-side approaches to watermarking that were designed for on-demand viewing scenarios using extraction and analysis processes that take far too long to generate effective action. This has led to widespread adoption of what’s known as the A/B approach to server-side watermarking with live content streams, which entails encoding a segment of the content twice and marking each with a different code.

The system algorithmically assigns and communicates to the adaptive bitrate (ABR) manifest file a unique sequence of watermarked chunks from the A and B versions of the duplicated segment to serve as each user’s identifier when the client calls for the chunks in the sequence specified by the algorithm. This solves the problem of executing on-the-fly injection of the watermarks into each unicast stream, but too much time is lost with both the dual-encode marking process, which adversely impacts streaming latency, and the watermark extraction process, which imposes untenable delays on efforts to disrupt the live streaming viewing experience.

Even the fastest server-side injection processes add in the neighborhood of five seconds to end-to-end latency, and extraction can take several minutes. And the A/B method adds to the workloads on encoders, increases storage requirements in conjunction with temporarily queueing up A/B chunks in the delivery network, and consumes more bandwidth over distribution links to the points where the A/B switching occurs.

In contrast, client-side solutions that are lightweight and versatile enough to be integrated with media players or hardware on any device add no delay with watermark injection, and watermark extraction can be performed in a minute or so. Faster injection and extraction with client-side approaches results from the fact that watermark identifiers are encapsulated in shorter video segments, which is acceptable in live scenarios because pirates don’t have time to figure out what counter measures to apply, as they would were this method used with on-demand content.

But for many license holders the client-side approach is not secure enough. The accessibility of client-based code to skillful hackers, no matter how vigorously the code is protected, is perceived as too great a vulnerability.

Nor are client-side solutions fast enough when it comes to meaningful disruption of theft tied to real-time video experiences. Moreover, even for producers who are comfortable with the client-side solution for live content protection but also need to protect time-shifted content, the fact that they must employ both approaches to cover all bases is far from ideal.

A Superior Approach to Server-Side Watermarking

A highly secure server-side watermarking solution enabling latency-free mark injection and identification of pirate sources within 5 to 15 seconds would render all these issues moot. It would support timely disruption of illicit content streamed at multi-second latencies and at real-time speeds as well.

Such a solution will be possible utilizing the capabilities of an XDN supported by Red5 Pro’s technology. Red5 Pro will issue further details on a real-time watermarking solution in the near future, but, for now, the point is to underscore the fact that XDN technology is well suited to development of such solutions by virtue of the way the platform achieves real-time distribution of live content both to and from end devices.

As documented elsewhere, the Red5 Pro XDN employs streaming mechanisms based on the Real-Time Transport Protocol (RTP) in combination with advanced intelligence and high-velocity processing at Edge Nodes to maintain 200-400ms real-time latency parameters no matter where a content stream originates, how far it travels and how many end points it reaches, even into the millions of viewers of a popular sports event. RTP, the basis for IP-based voice communications, is the foundation for both WebRTC (Real-Time Communications), originally developed for peer-to-peer video communications, and RTSP (Real-Time Streaming Protocol), a one-to-many video streaming alternative to HTTP that became an IETF standard in 1998.

WebRTC is the most commonly used option in XDN operations, owing to the fact that support for client interactions with the protocol have been implemented in all the major browsers, including Chrome, Edge, Firefox, Safari and Opera. At the same time, the XDN can ingest video formatted to all the other leading protocols used with video playout, including RTMP (Real-Time Messaging Protocol), SRT (Secure Reliable Transport), MPEG-TS (Transport Protocol) and HLS (HTTP Live Streaming). These are packaged for streaming on the RTP foundation with preservation of the original encapsulations for egress to clients that can’t be reached via WebRTC or RTSP.

The XDN platform, instantiated in one or more virtualized cloud environments, utilizes a server software stack hierarchically deployed and orchestrated in clusters consisting of one or more core Origin Nodes connected to Relay Nodes, each of which serves an array of Edge Nodes that deliver live unicast streams within their assigned service areas. When multiple bitrate profiles of the content are delivered in emulation of profiles used in an ABR ladder, Edge Nodes apply real-time assessment of device parameters and access bandwidth conditions to match each unicast stream to the receiving device.

That Edge Node intelligence can be applied as well to enable per-stream assignments of personalized content, ads, and other applications, including watermarks, avoiding the need to rely on manifest files to direct client-side selection of bitrate files and ancillary content. In fact, when it comes to security, the XDN is already leveraging Edge Node intelligence to help manage all the functions related to authenticating devices, authorizing users, and securing protected content in conjunction with RTP-mandated AES encryption as defined by the Secure Real-Time Transport Protocol (SRTP), which provides a cost-effective, equally secure alternative to digital rights management (DRM) systems.

Edge-based XDN processing mechanisms that make real-time streaming possible without the latency incurred with HTTP-based ABR streaming also make it possible to inject marks on each stream unicast from the edge to end users with no need for dual A/B segment encodes. Instead, the ironclad security protecting the XDN Edge Nodes from hacking penetration makes it possible to use simple, easy-to-extract marks much as can be done with client-side solutions without the security exposure intrinsic to client-based software.

Bringing a superior mode of server-side watermarking into XDN operations is an obvious next step toward a more robust and effective live content security regime. By enabling a highly secure, hassle-free approach to identifying and disrupting sources of piracy, the XDN provides the ideal network environment for the effective, ubiquitous utilization of watermarking that’s destined to become a universal requirement in the battle against high-value video theft.

To learn more about XDN technology, contact info@red5pro.com or schedule a call.