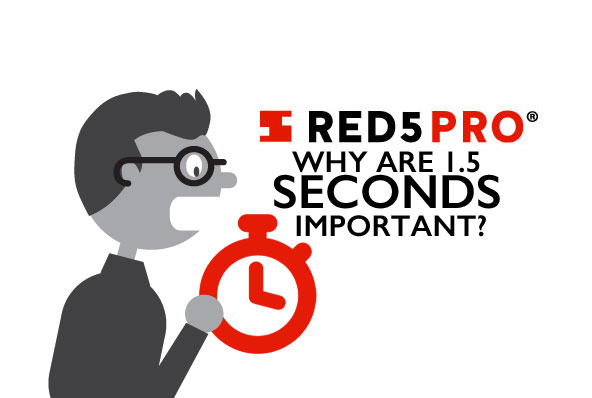 Latency is a big deal to us, but why should it matter to you? Red5 Pro has a latency under half a second while everyone else has a 2+ second latency; so why all the fuss over 1.5 seconds?

With communication as fast as it is, latency matters more and more. It may not sound like much, but if you really think about it, a lot can happen in a second or two. When it comes to trying to capture live events, every second (and partial second) counts.

If you took two seconds to react to everything going around you, you'd perpetually be behind everyone else. It would be like you are stuck in a Monday morning, pre-coffee haze. You would suffer from sluggish reaction times and a decreased ability to effectively communicate. Not to mention, almost getting slapped in the face every-time one of your co-workers gives you a high five.

Now that may sound extreme, but the issue remains that when you have to interact in real-time, the slightest of delays will cause issues. Thus, it stands to reason, that a "measly" one and a half seconds can actually make quite a difference.

Take a news show for example. A high latency decreases the natural flow of an interview as each party receives a delayed audio feed. That negatively impacts both those on the screen and those watching at home.

Or maybe you are trying to place a bid at an auction. It would be pretty frustrating getting outbid every-time because you are constantly two seconds behind.

Of course, think how much can happen during a sporting event. A goal, a hit or a pass all take place well under a second. The entire game can change and you would miss it.

Theoretically, 1.5 seconds isn't a long time, but once you put it in context, it proves to be quite a long time in practice.

So if 2 seconds is too long, then Red5 Pro's under .5 second latency is much better at providing a true live-streaming experience. Try it out for yourself and give us a call so we can show you what Red5 Pro can do for you.