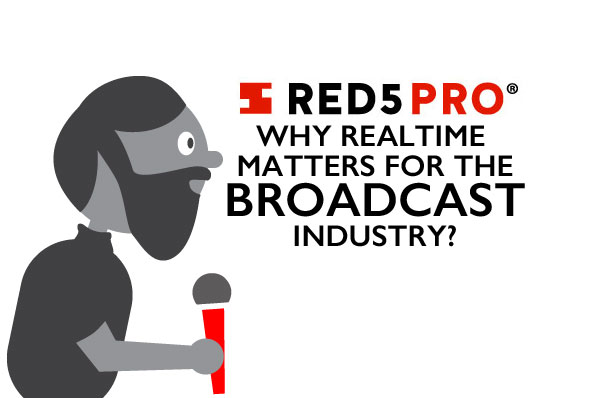 Despite driving the original innovation of live streaming media, the broadcast industry (like many others), has faced disruption in the age of the internet. Non-traditional methods of consuming media such as “Over The Top” streaming (Netflix, Hulu, etc.) have wrested audiences away from cable and emerged as strong contenders in the market.

However, though some of us have cut the cord on cable, we've certainly all kept our televisions plugged-in. Cable is not synonymous with broadcasting.

Speed is the name of the game right now. We all want it right now, as it's happening; just 'click' and there it is. This is where the broadcast industry can once again regain the top innovator crown. The key lies in latency.

Traditional cable broadcasts have a delay of multiple seconds (sometimes as high as 30 seconds!). Part of this is a purposeful delay for censorship and editing. However, given the rapid rate at which AI continues to improve, this may not be an outstanding concern for much longer.

With a long delay between the actual event happening and when viewers at home can see it, those watching the game in the actual stadium can spoil the action for others through posting on social media or texting their friends. Some people avoid social media for this very reason. This is unfortunate, as part of the appeal for sports is interacting with other fans reacting to the excitement, discussing plays and analyzing strategies.

Social media should contribute to the fan experience, not detract from it.

There's a psychological effect on watching something that's live. It creates more emotional investment. Even if you don't know the outcome, watching a game or event after it airs is still less exciting.

You know that you likely would have already heard about any truly incredible moments that could have transpired. Today, that’s true even if you are just a minute behind. Either your phone is buzzing uncontrollably and the sense of shock is curbed, or the phone is silent, and nothing magical is on the way. Utter surprise or delight is impossible regardless.

Big, global sporting events like the World Cup or the Olympics often bring people together for the thrilling competition that they broadcast. This month, the U.S. Women’s World Cup Final became one of the most-watched soccer games in U.S. history, drawing a total of around 14.3 million viewers on Fox (including streaming), beating last year’s men’s final.

However, this preference extends beyond sports into the realm of popular television shows as well. 19.3 million viewers tuned in to watch the series finale of Game of Thrones the same night that it aired. That was a record even for the highly acclaimed HBO network.

We are all familiar with the great effort it takes to avoid spoilers, so extra care should be taken to avoid them as even those that are watching it at the same time, may actually not be.

Now with non-traditional outlets such as DAZN and Hulu's new sports package, the traditional broadcast outlets have an opportunity to differentiate themselves. Online streaming services usually have an additional delay or 15 seconds or more beyond even that of cable.

There are a few different factors behind this including the additional processing of the stream to send it over the internet and the extra time needed for ad insertion. However, the largest reason is that most streaming services rely on HTTP based protocols like HLS and MPEG DASH which by design create latency. This includes CDNs utilizing HTTP based protocols to cache their chunks and playlists to improve delivery performance which in turn introduces extra latency.

Those already familiar with streaming protocols might point out that the development of CMAF and Apple’s new Low Latency HLS were supposed to solve that high latency problem. This is true to a certain extent. Using chunked streaming does reduce the typical latency seen with HLS and MPEG DASH, but they are only able to achieve latencies of around 2 - 3 seconds. You can’t exactly call that real-time. A latency measured in seconds will always be slower than one achieved in milliseconds.

This is where the opportunity lies.

In order to keep a competitive edge, the stream must be received as soon as possible. With Red5 Pro's sub 500ms of latency, real-time stream delivery is possible: all the excitement with none of the spoilers.

Real-time latency essential for fan interactivity along with other ways of experiencing sports. The sports betting giant DraftKings recently launched Flash Bet, an "instantaneous live wagering experience". Currently, it is restricted to Wimbleton, and relies on "embedded match graphics...with descriptions of the service, points won and court type" to convey the action.

Presumably, this reveals an issue DraftKings is having when it comes to synching video of the live gameplay with the data stream. Again, this is where real-time latency can solve this issue and could allow you to watch video footage of the game AND place bets at the same time.

The technology exists, the question remains; who is going to build it?

Interested in finding out more? Send a message to info@red5pro.com or schedule a call.