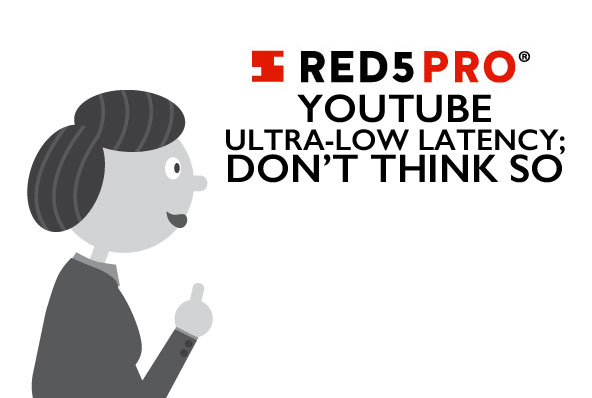 YouTube recently announced the implementation of "Ultra-low latency".  Not only is this something that Red5 Pro added a long time ago (last October, in fact, but it's also just plain wrong. We call shenanigans!

Let's start with the definition:

Ultra: going beyond others or beyond due limit: extreme

YouTube's approach boasts an "ultra-low" latency of two seconds. On the other hand, Red5 Pro's WebRTC implementation delivers a much better latency clocking in at under half a second making Red5 Pro the clear winner. It's right there in the definition: "going beyond others". You can't claim to go beyond others if you don't. Period.

Of course, YouTube isn't entirely wrong with how they handle latency. Afterall, it definitely goes beyond the Red5 Pro latency (in that it's higher) but that still violates the understood meaning of the word. How can you have real-time interactions like sports broadcasting, drone control or other applications with a two-second delay? You can't.

In our opinion, the integration of Red5 Pro with WebRTC is the best platform for low-latency live-streaming at scale. Don't believe us? Try it out for yourself, or set-up a demo.