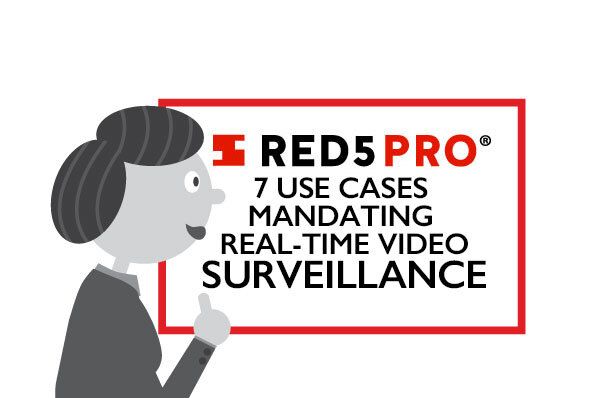 As video surveillance plays an ever more consequential role in government and private sector markets, finding a way to enable real-time visibility into all fields of view has become a top priority.

High-resolution digital cameras equipped to stream live video to monitoring stations near and far have moved far beyond the limitations of analog cameras with their grainy records of bad behavior. But the usefulness of digital technology is highly constrained when human monitors can’t see what’s happening in real time.

Fortunately, this doesn’t need to be the case in an environment where digital cameras utilizing the Real Time Streaming Protocol (RTSP) routinely stream their payloads for ingestion at multi-video aggregation points. Surveillance managers can act on the real-time video surveillance mandate by leveraging a platform that ingests and packages a cluster of high-resolution video feeds for simultaneous delivery to Internet-connected monitoring posts wherever they may be in less than half a second.

As a result, real-time visibility into monitored spaces, often with the support of advanced analytics, will soon become a ubiquitous component of video surveillance in local government, national defense and business operations as well as residential applications related to security and health maintenance. Following are some use cases that underscore just how important real-time video surveillance has become in all these market segments.

Police need to be able to respond as fast and as knowledgeably as possible to active shooter and other emergencies. Guidance from surveillance administrators tracking wrongdoers in real time can save lives, especially when they can rely on advanced analytics to derive useful information faster from all the relevant points of video coverage.

In an advisory addressing the need for faster response times in active school shootings, the Department of Homeland Security notes that “the average duration of active shooter incidents in institutions of higher education within the United States is 12.5 minutes. In contrast, the average response time of campus and local law enforcement from the beginning of the incident to the scene is 18 minutes.”

In a real-time surveillance environment, 911 dispatchers and action coordinators can immediately match the caller’s location with the nearest camera feeds to provide a comprehensive perspective on the perpetrator’s whereabouts. In cases where video content analytics (VCA) is in play, guidance can be enhanced through automated perusal of multiple live video streams to provide more information than officials can amass manually.

For example, in the event of vehicular flight from a crime scene, the video feeds along multiple routes and from hovering drones can be instantly searched to pinpoint a license plate or, in the case of AI-assisted analytics, a vehicle of a certain make or color. When drones are in play, once the fleeing vehicle is found a drone can be assigned to follow it anywhere it goes.

But in the case of drones, which are playing an ever greater role in video surveillance across multiple market segments, it’s important to note that surveillance operations managers searching for ways to support real-time video communications will need to ensure drone feeds are accounted for in the video aggregation and distribution process. Minute distance-related disparities in timing of those and any other video feeds ingested by a distribution server must be eliminated to ensure synchronized real-time delivery of the aggregated streams to observation posts.

Real-time surveillance will contribute greatly to municipalities’ ability to track accidents, crowd behavior, traffic patterns and other activity in public spaces. Immediate response to violations of social distancing and other preventive measures in the Covid 19 era has become an especially significant facet of live video surveillance.

With the application of VCA across multiple live feeds, the smart city vision comes to life. For example, leveraging actionable video intelligence, cities can dynamically update traffic light schedules in response to traffic flows, manage use of HOV (high-occupancy vehicle) lanes and deliver more timely messaging through digital highway signs. VCA identification of anomalous events as they crop up across a city’s perusal of live camera feeds can trigger preventive action against incipient fires, rowdy behavior, robberies and other emergencies.

Reliance on real-time responses to drone-delivered video has become intrinsic to military and border patrol operations worldwide. In the U.S., the Pentagon’s support for AI and other technologies contributing to such capabilities has been a significant force behind the spread of live video applications to surveillance in civilian life.

Drone surveillance has also become a major factor in efforts to combat fires, floods and other emergencies, providing coverage outside the range of fixed cameras and, in the case of smoke-choked air space, outside the range of helicopters and airplanes. Here again the ability to aggregate those drone feeds for real-time distribution to control centers is essential.

Video surveillance in business has moved beyond security to uses in myriad other applications where real-time visibility will play an ever-greater role. Where security is concerned, real-time visibility with heavy video coverage indoors and out will not only help catch bad actors but also contribute to deterrence, especially if workers and others understand activities are being viewed in real time.

The same principles regarding security maintenance in government and commercial operations apply with use of real-time video surveillance in and around households. Whole neighborhoods served by a given surveillance provider will generate high volumes of live video feeds that can be ingested for real-time distribution to providers’ monitoring stations.

Real-time surveillance is also a key component to growing reliance on remote monitoring of the elderly and others in need of regular medical scrutiny. Live video will be an essential complement to sensor data when it comes to keeping tabs on people’s wellbeing 24/7.

The role Red5 Pro is playing in enabling real-time video surveillance makes clear the technology is now available to support any of the use cases described here and many more. As explained at length elsewhere, the Red5 Pro real-time streaming platform utilizes TCP and UDP (User Datagram Protocol) as embodied in the RTSP and WebRTC protocols to achieve real-time delivery of content through cloud-based hierarchies of core, relay and edge servers to any number of viewers at any distance within 200-400 milliseconds of ingestion.

In the case of digital video surveillance cameras streaming over RTSP, a Red5 Pro server positioned at the multi-stream aggregation point can ingest and package hundreds of camera feeds for synchronized distribution to one or more monitoring posts, including any cloud locations where analytics engines facilitate user responses. Real-time performance can be achieved using the RTSP protocol end to end, provided that receiving devices are running a client player that supports the protocol.

But there’s really no need for a plug-in, because the Red5 Pro platform can repackage content ingested from RTSP streams for distribution via WebRTC without adding latency. While both protocols rely on RTP (Real-Time Transport Protocol) as the transport mechanism, only WebRTC is supported by all the major browsers.

The Red5 Pro platform is providing support for real-time video surveillance across multiple private sector and government scenarios, often involving heavy reliance on drones. For example, Novetta, a provider of actionable intelligence solutions, is using Red5 Pro with systems employed in defense, federal law enforcement and government intelligence. The company relies on real-time reception of video feeds from body cameras, drones and other devices to scan for targets of interest and coordinate a tactical response.

In one of the more dramatic displays of how real-time video communications aids in surveillance, a leading commercial operator of space missions is testing the Red5 Pro platform as the point of ground-based ingestion and distribution of video delivered from rockets in flight. As described in a recent white paper, the ability to steam the video to thousands of viewers for simultaneous reception across multiple locations within 200 ms. of ingestion is critical to the space company’s operations. So, too, is the platform’s ability to scale to tens of thousands of concurrent views across hundreds of feeds coming in from cameras positioned throughout the spacecraft.

Clearly, there’s a pervasive need for real-time visibility into spaces observed through video surveillance. Equally clear is the fact that the need is being met across an expanding array of mission-critical applications through reliance on the Red5 Pro real-time streaming platform.

For more information, contact info@red5pro.com or schedule a call.