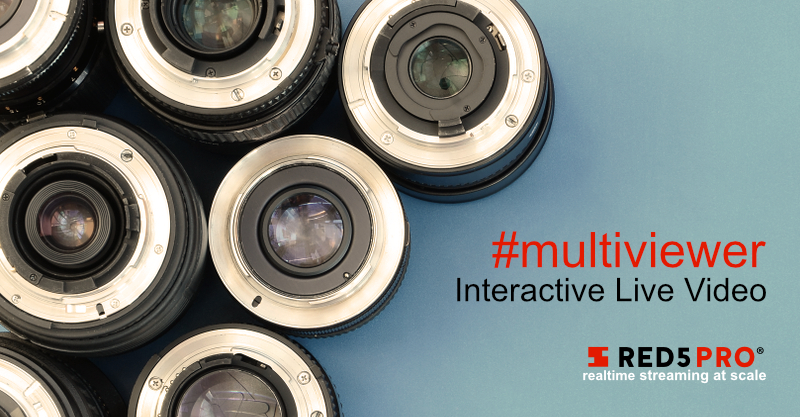 Over-the-top (OTT) streaming services focus on providing video content over the Internet at the whim of the user and constantly evolve to meet the needs of the audiences they cater to. OTT has already progressed from video on demand (VOD) to live video and, as discussed in a previous post, Red5 Pro believes the future of video entertainment is interactive. As teams work hard to develop more engaging platforms and bring interactive live video to life, new trends emerge. The latest trend in OTT streaming, particularly in the sports entertainment industry, is multiviewer technology.

Multiviewers allow users to experience multiple video sources as one single output display. For example, security guards could survey several video streams from different locations on one screen simultaneously, rather than having a multitude of monitors each showing a different stream.

Up until recently, multiviewer technology was primarily used for monitoring live streams. Monitoring systems are used for projects ranging from security to live award shows to sporting events. This technology allows the operator to monitor several different streams simultaneously in one place while keeping stream latency and costs low. It is less resource-heavy than using several monitors and, since everything can be seen as one output, multiviewers enable monitoring to take place in smaller locations. For sports, this is a big deal; it empowers the operators to receive and relay information in real time, switch between locations to monitor different games, edit the output layout as needed for each event, and maintain high quality streams.

Monitoring is still a major use case for multiviewer technology, but the needs of the sporting industry—and others—are changing. As live video is already at the forefront of sports entertainment, the next step is to make it interactive. To keep viewers interested and engaged, live video should not be passive watching; it should be an experience. Multiviewer technology can make that possible.

For engaging live sports experiences, multiviewer technology can be designed to give more control to the end user, allowing fans to choose which camera angles they want to watch. Apple TV platforms like ESPN+ employ this technology as part of their Multicast feature, which can be used not only to select various camera angles of the same match, but also to watch multiple games at the same time. This revolutionizes the way fans interact with video; it permits the user to decide which camera angles are most important to them. Additionally, this feature ensures that fans never miss a game. When it comes to soccer, for example, there are often two or more games happening at the same time. No more deciding which to watch; now viewers can watch them both at once. And this doesn’t only apply to sports. Apple TV allows watchers to pair a soccer match with the news or even the latest episode of their favorite reality TV show.

Apps like fuboTV take multiview streaming a step further by adding capabilities such as on-screen player stats. With this feature, fuboTV users can now add, review, and remove player stats on screen without having to step away from the game. This type of interactivity-at-ease is key to keeping audiences captivated throughout a stream.

Looking to the future, one possible use case for multiview technology in sports is to incorporate betting into everyday streaming. Just as users can simply pull up player stats during a game with fuboTV, multiviewer technology such as Red5 Pro’s Mixer could be used to effortlessly access betting features while watching that day’s match.

Live interactive video is the future of the sports entertainment industry, and at Red5 Pro it also happens to be our specialty. With the right video streaming software, anything is possible. If you have an idea you want to bring to life, feel free to reach out to our team at info@red5pro.com or schedule a call.